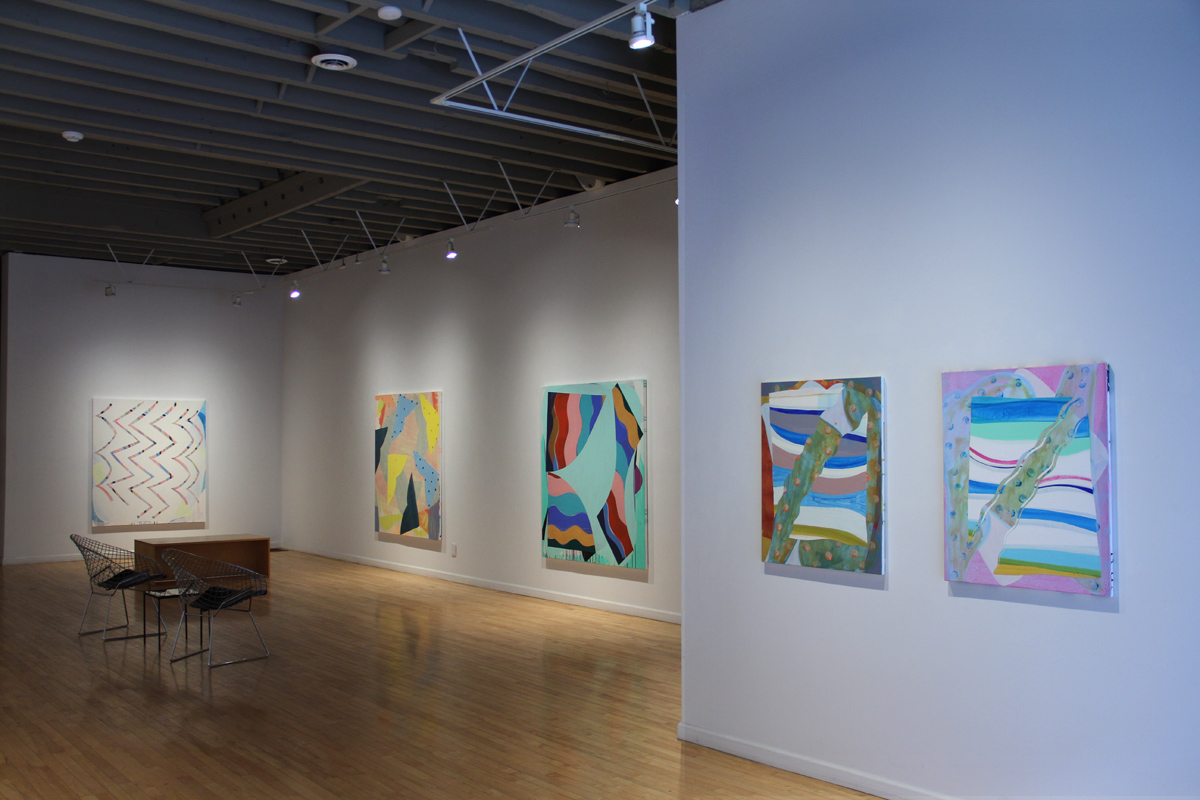 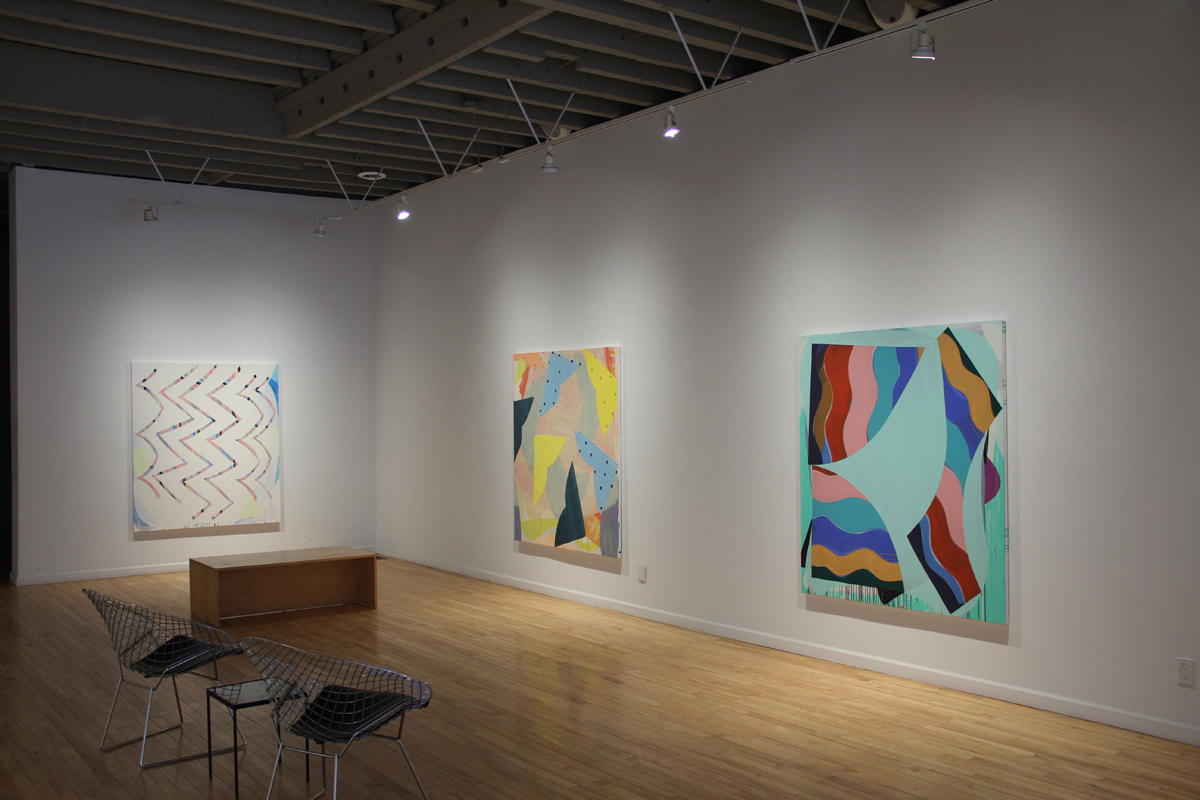 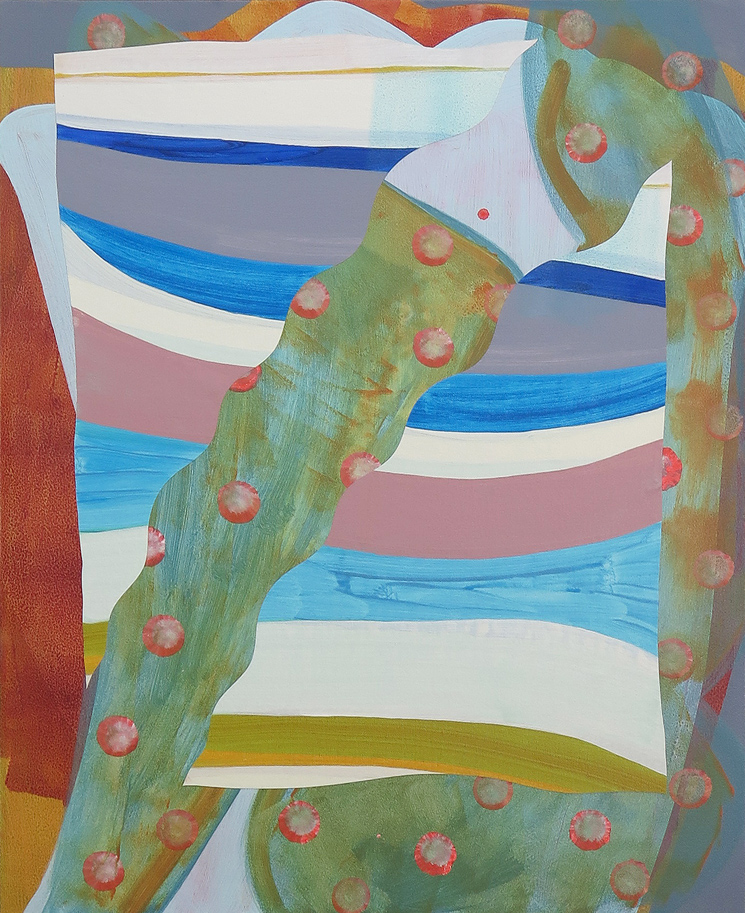 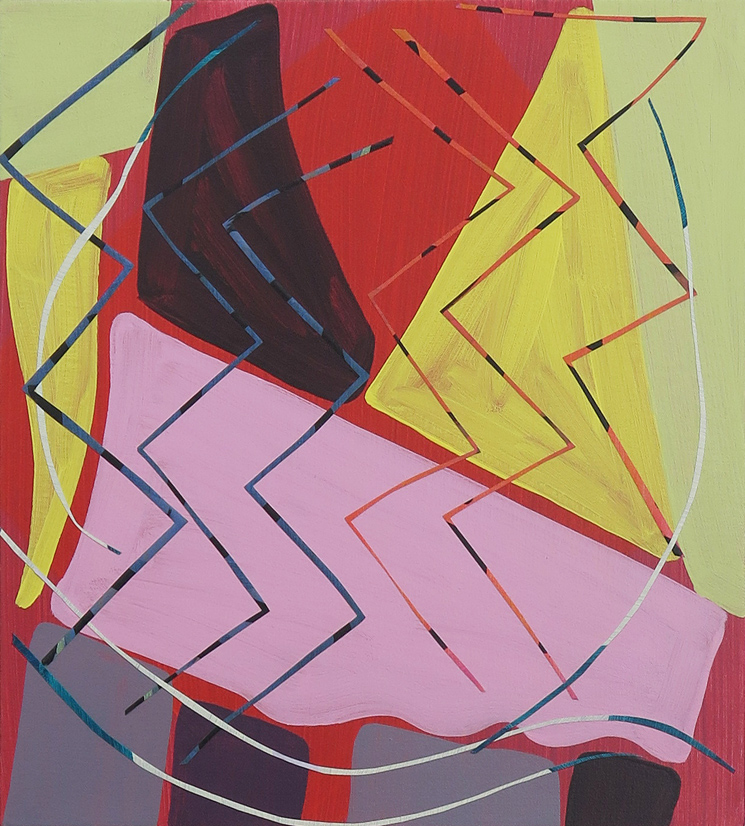 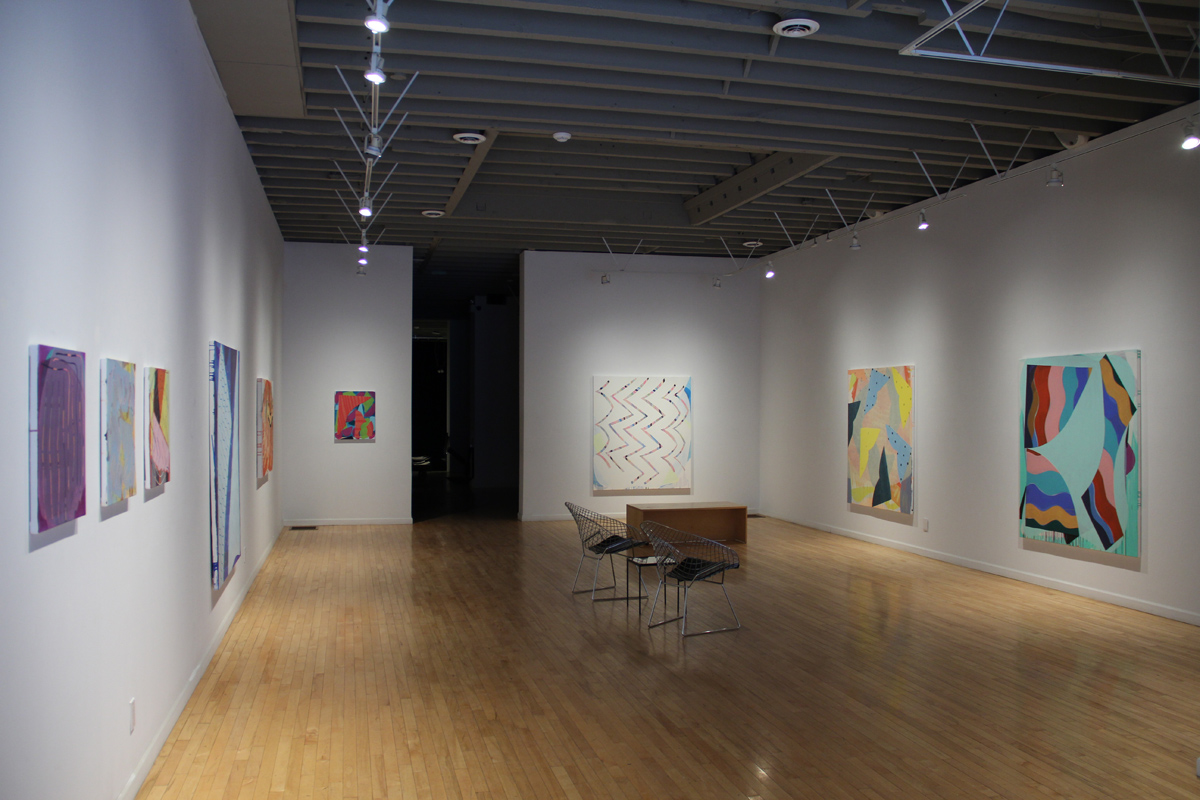 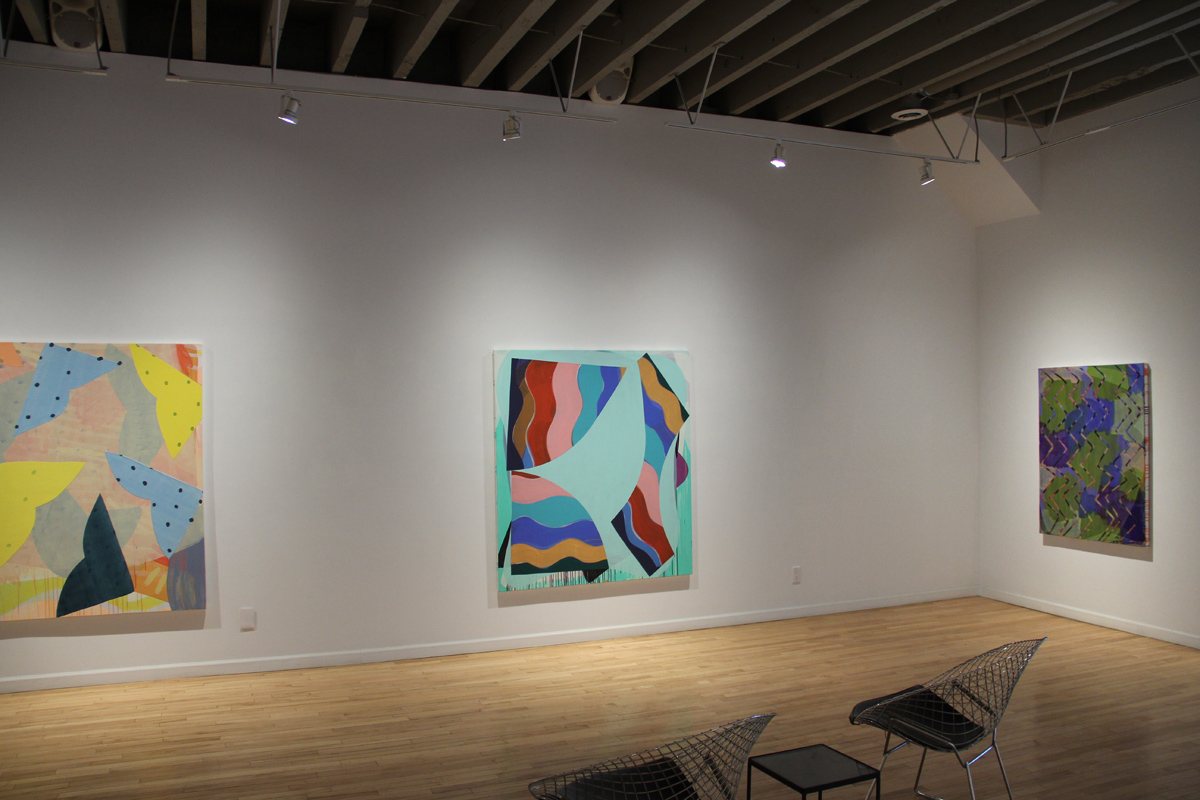 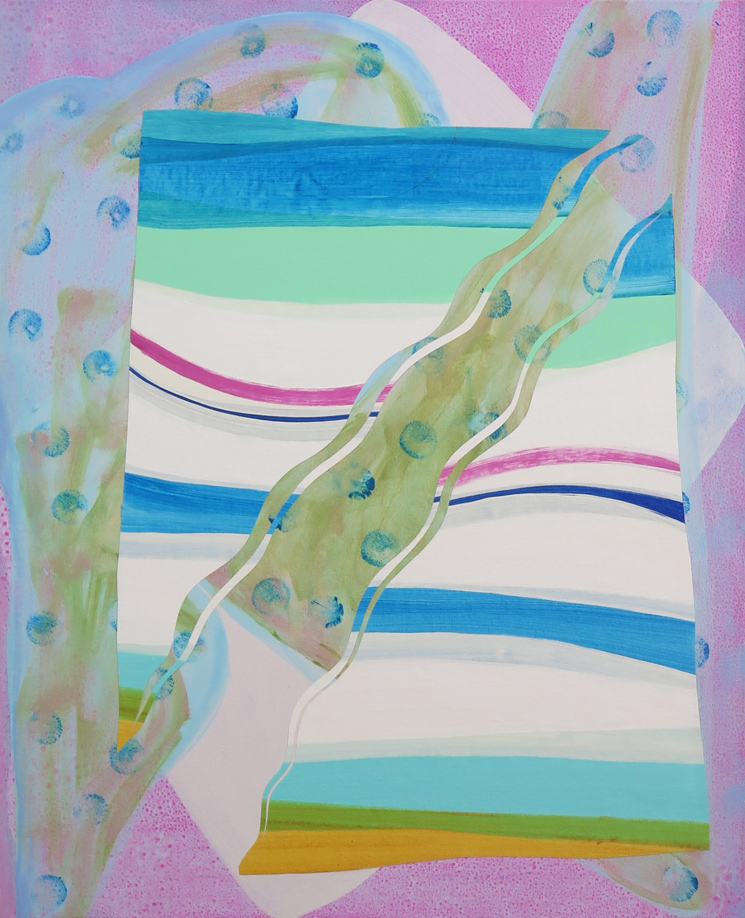 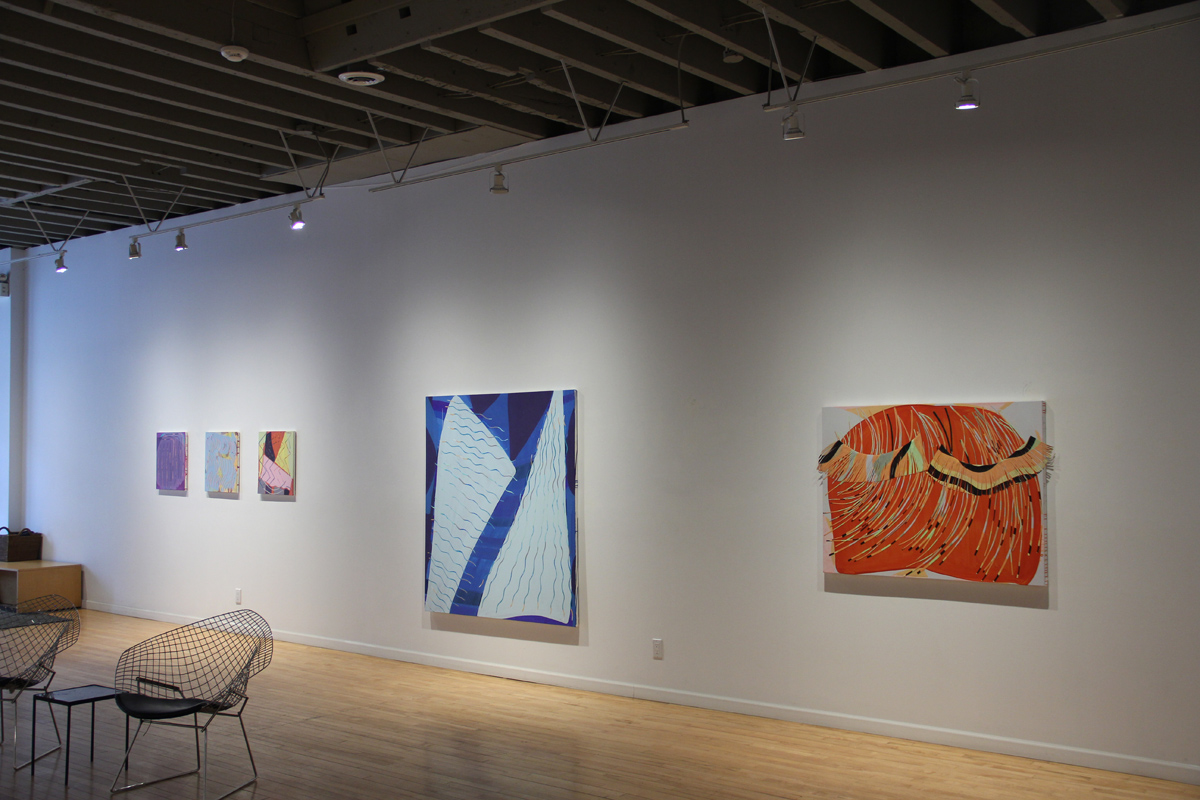 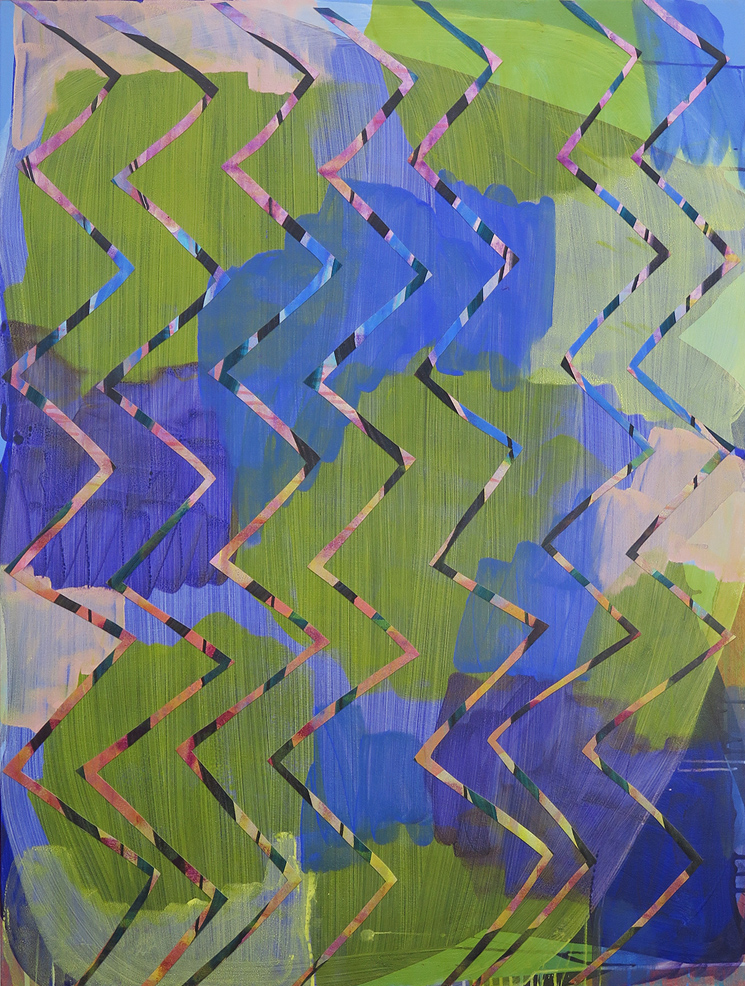 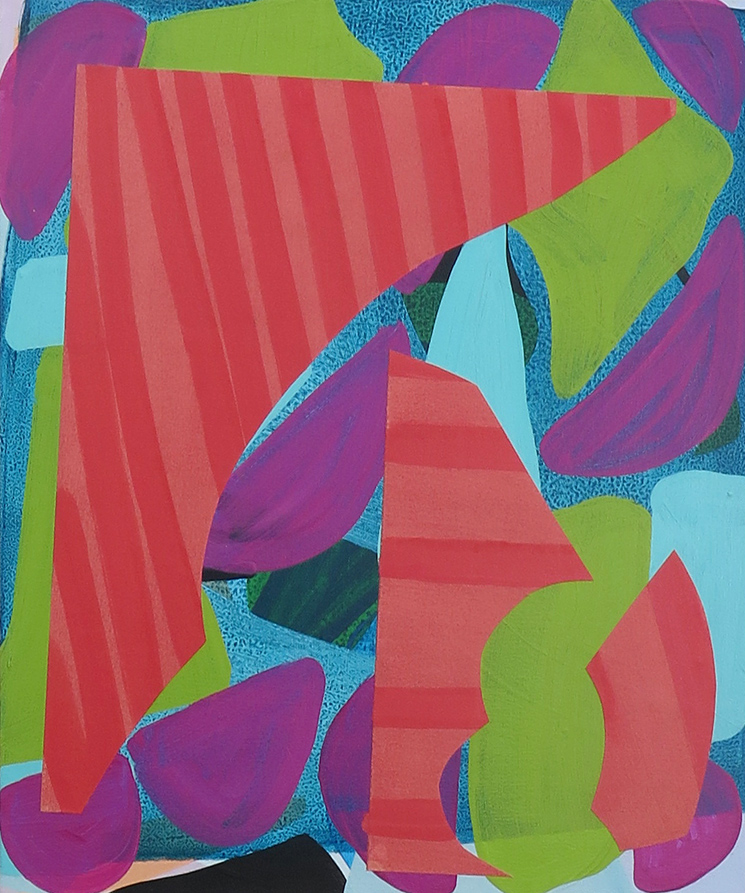 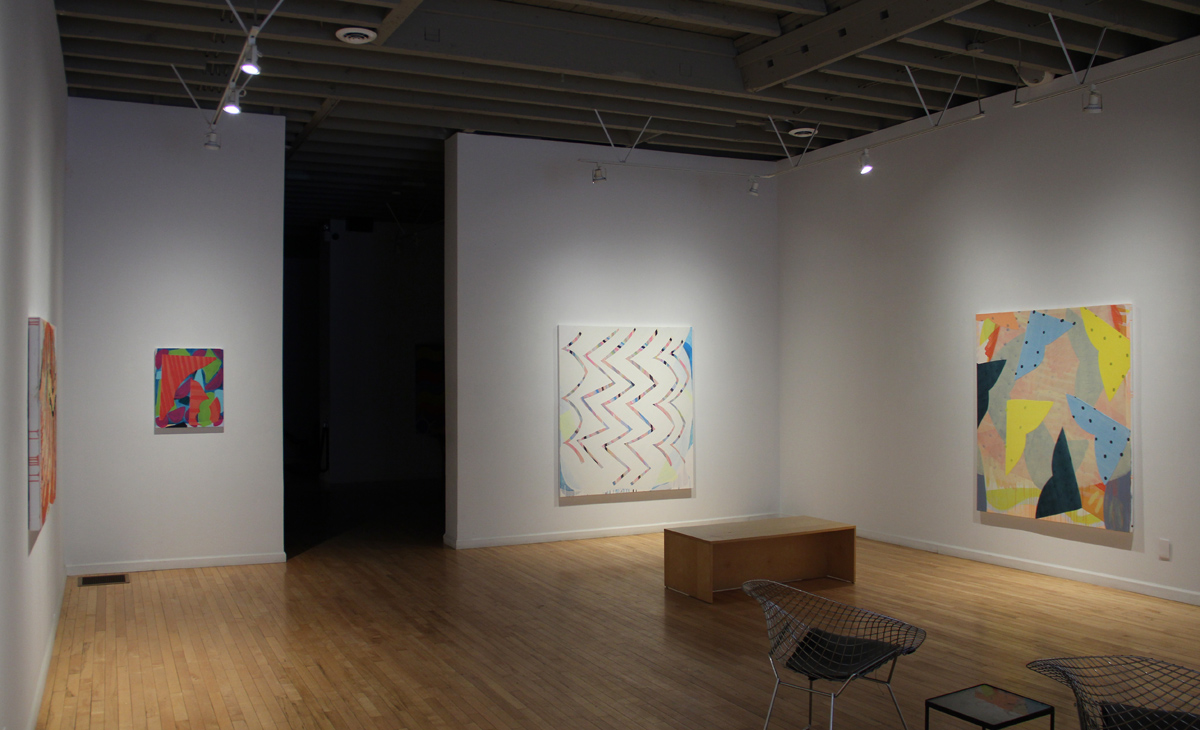 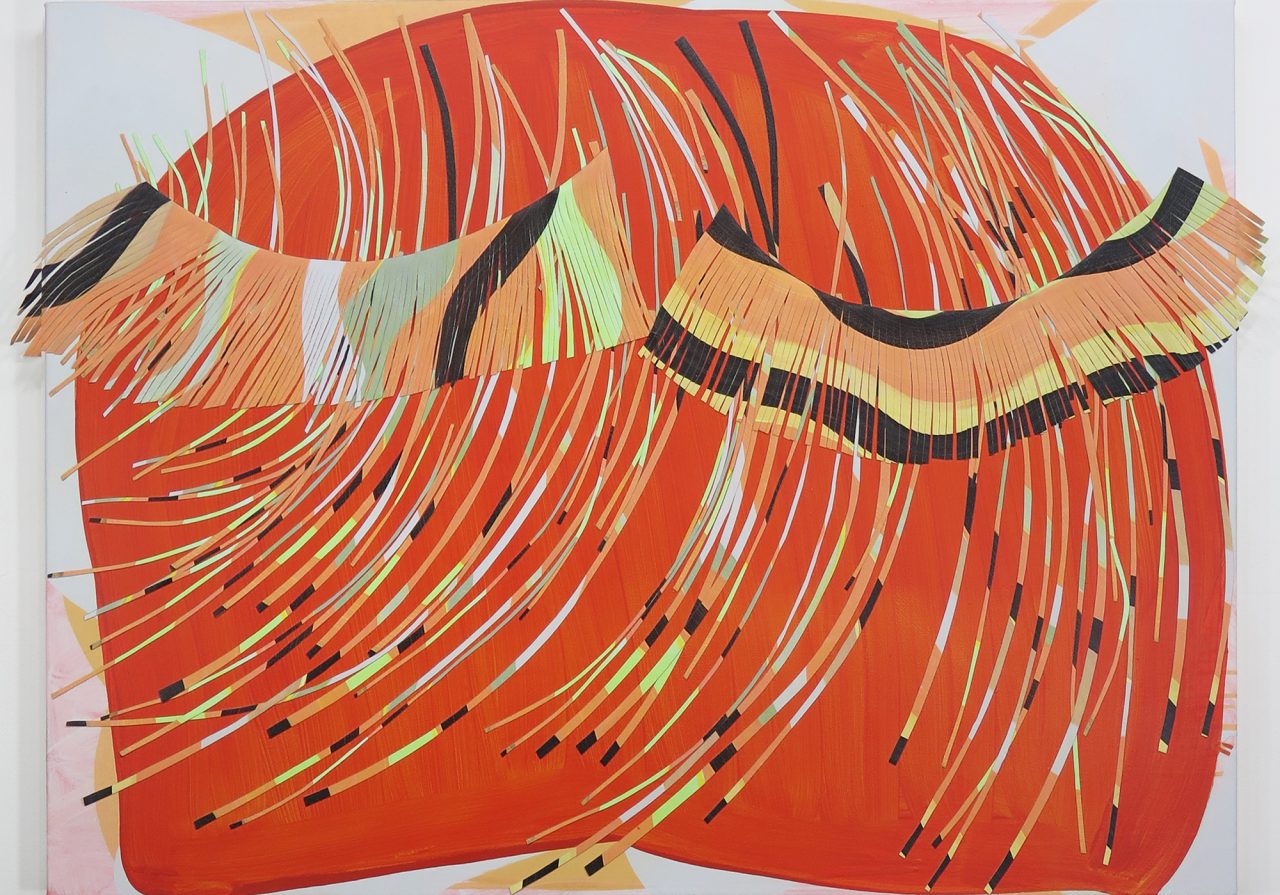 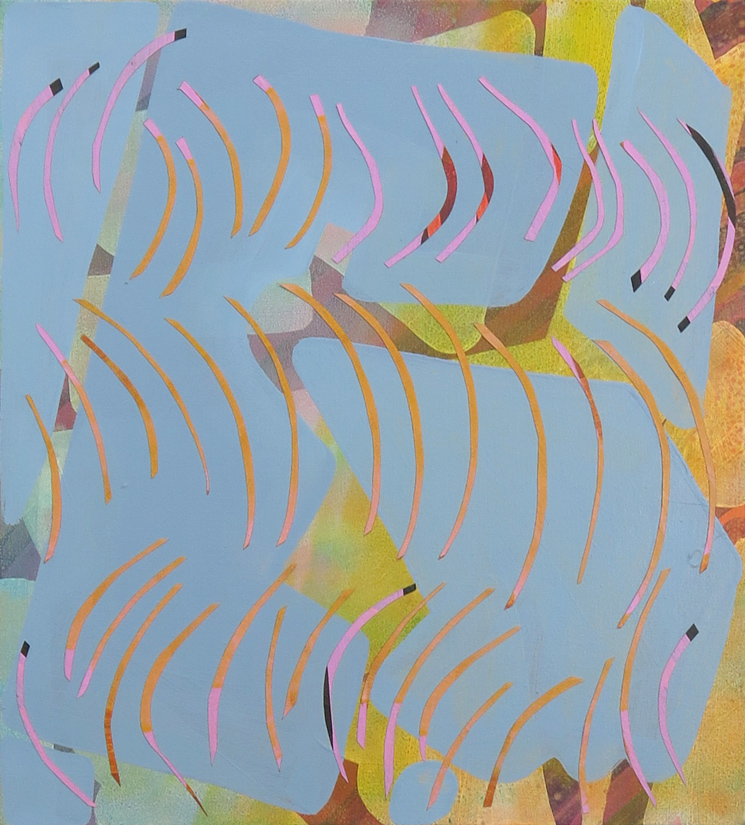 “reddish – of a color at the end of the color spectrum (next to orange); resembling the color of blood or cherries or tomatoes or rubies. Blood-red, carmine, cerise, cherry, cherry-red, crimson, red, ruby, ruby-red, scarlet, ruddy. Chromatic – being or having or characterized by hue.”

The new abstract paintings included in Ashleigh Bartlett’s April exhibition “Reddish” have attitude and personality. Colour reigns supreme and emotion is expressed through an intricate combination of textures, shapes and materials.

With these new works, Bartlett assigns anthropomorphic qualities to the paintings – each has observed behaviours, feelings and actions. The shapes within the paintings are the characters; they perform, interact, engage and animate the space. Colour is meant to evoke emotion, thoughts and feelings, where the attitude of each painting is described in its colour. Bartlett wants to revel in “emotion” as an idea, but acknowledges the absurdity of humanizing emotion in relation to abstract painting. She creates a dialogue with the history of painting and abstraction through a casualness and tongue-in-cheek playfulness that gives these paintings an intense energy.

For the first time Bartlett is using collage and painting together. Over the past four years Bartlett has made extensive canvas cut-outs and shredded canvas-cut paintings. For “Reddish”, she has painted canvas-paper material specific for each painting, and then has cut and collaged these forms onto canvas. The zig-zags and waves introduce line into the work and the patterns that Bartlett is able to achieve with the collage, creates interesting dialogues between the shapes and the painted surfaces. There is evidence of many ways of painting: we see drips and marks that have been painted or rolled, opaque and transparent colours, matte surfaces and layered edges. The act of collaging becomes a defiant, rebellious behaviour that adds to the performative nature of these engaging paintings.

Ashleigh Bartlett was born in 1984 in Calgary AB.   She received her MFA from the University of Guelph (2011) and her BFA from the Alberta College of Art and Design (2006).  Her paintings have been included in various solo and group exhibitions across Canada, including “Future Station: 2015 Alberta Biennial of Contemporary Art” in Edmonton and “Made in Alberta: Part IV” in 2013 at the Art Gallery of Calgary.  In Spring 2013, Bartlett attended the Konstepidemin Residency in Gothenburg, Sweden, where she created small scale installations that inform a series of drawings, collage, and small works on paper.

Bartlett is also part of an ongoing collaboration with artist Jessica Groome titled CIRCLES & WIGS.  Working together in Toronto, Berlin, and Boston, CIRCLES & WIGS maintains an openness, curiosity and lightheartedness towards a variety of art making strategies.  An upcoming solo exhibition will be held at FELT Galleri, Bergen Norway in 2017.

In 2014 Ashleigh Bartlett was a semi-finalist in the RBC Canadian Painting Competition, and was awarded the Lieutenant Governor of Alberta Emerging Artist Award in 2016.  Her work is in the permanent collections of Global Affairs Canada Visual Arts Collection, The Alberta Foundation for the Arts, Cenovus, Encana and the Heritage Property Corporation.  She maintains a studio in Boston, Mass.