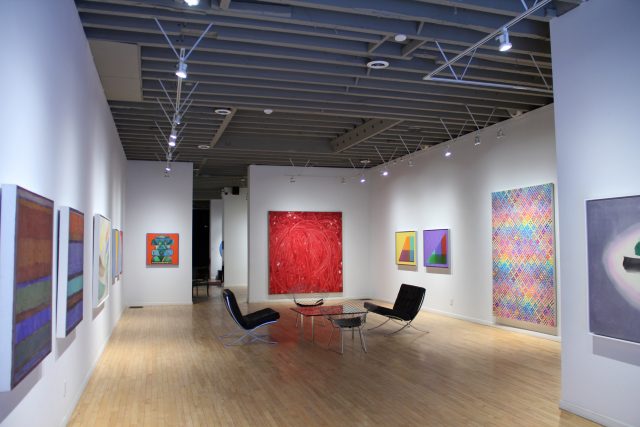 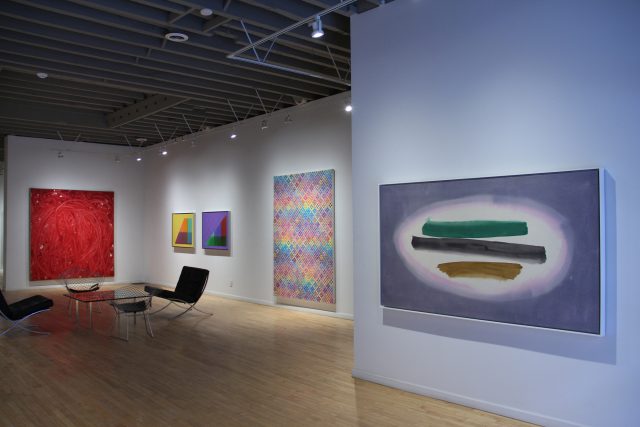 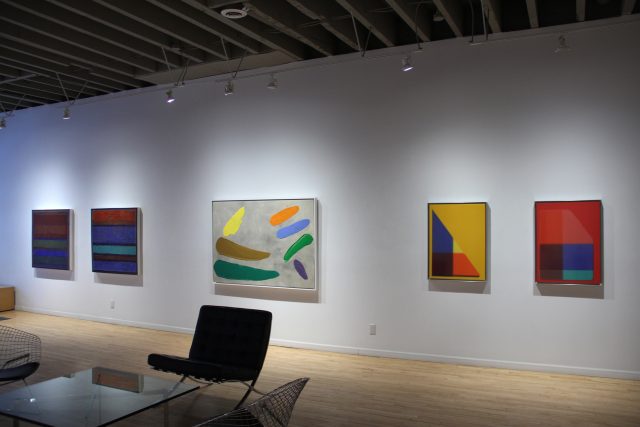 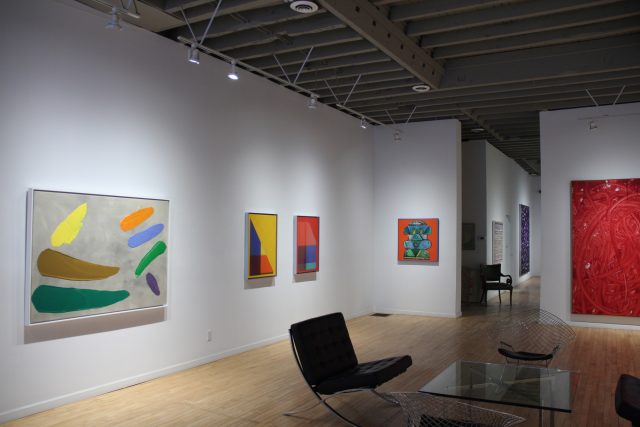 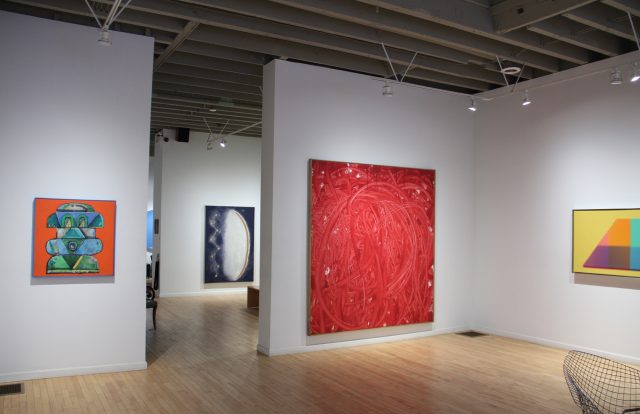 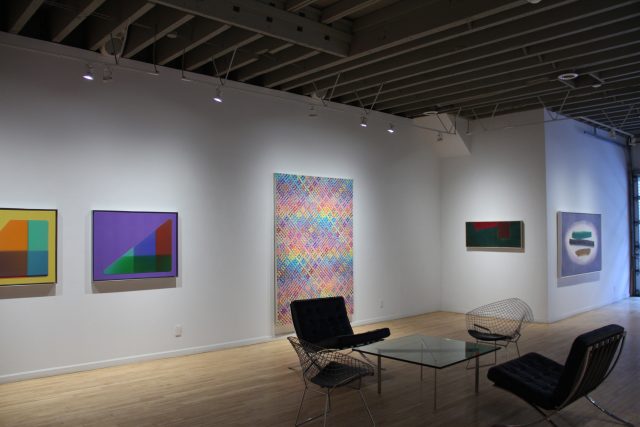 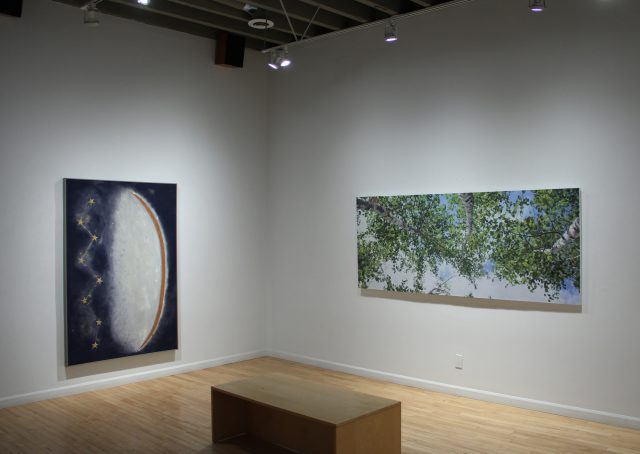 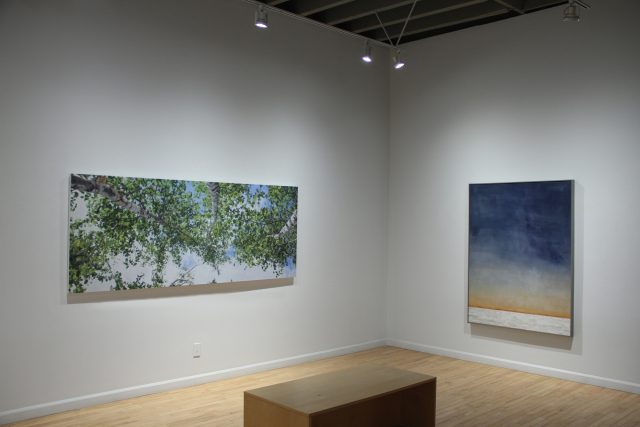 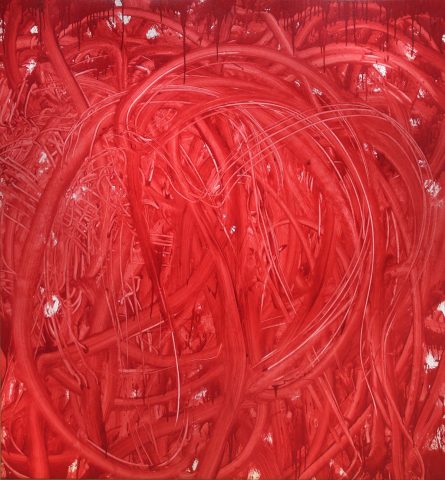 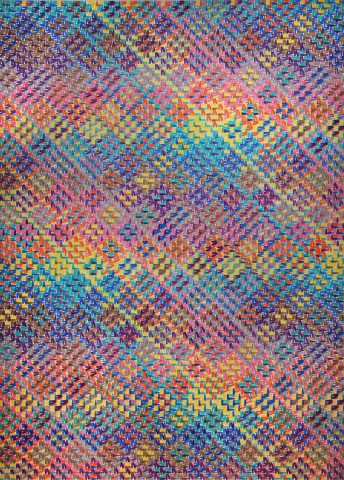 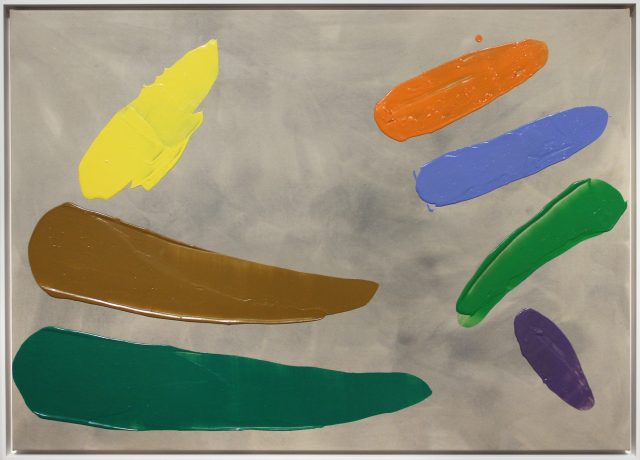 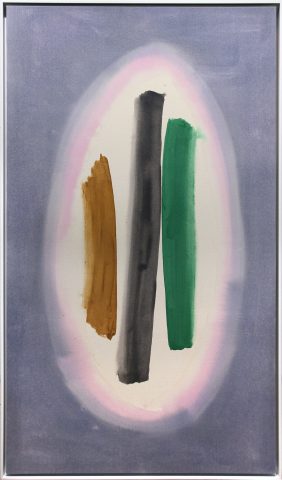 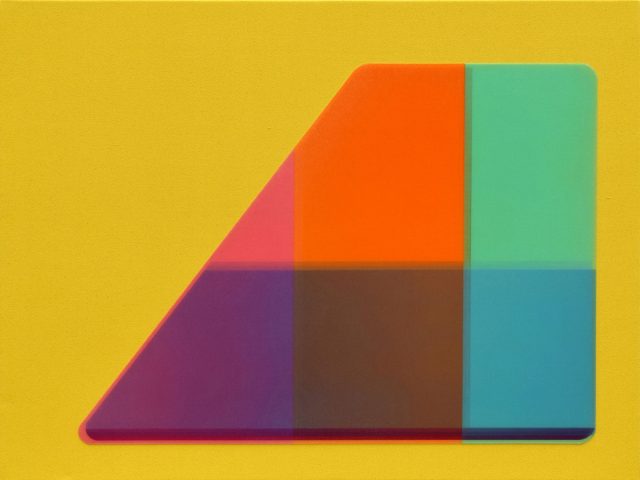 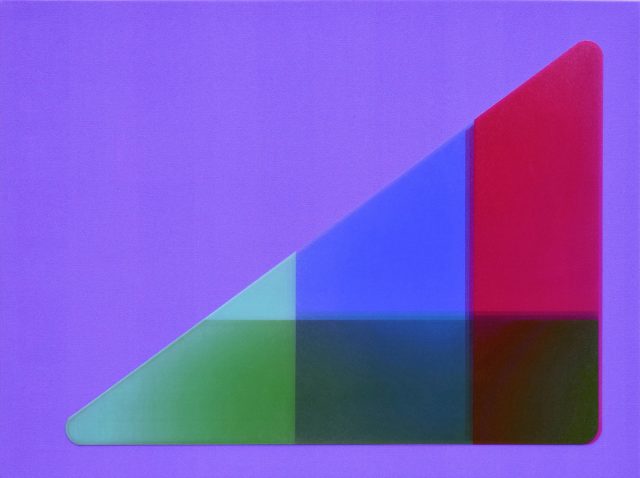 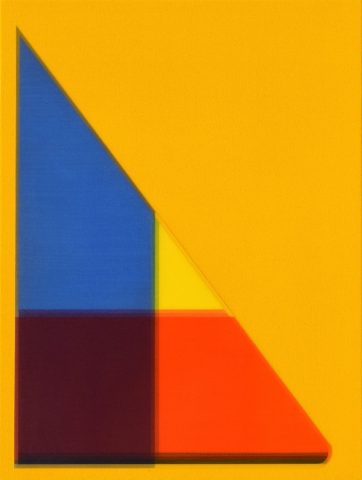 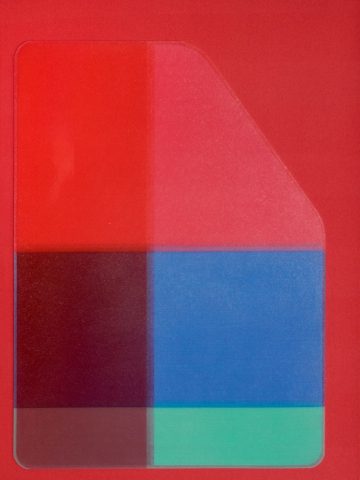 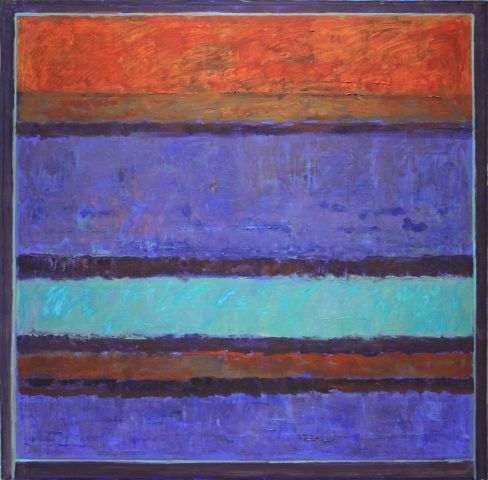 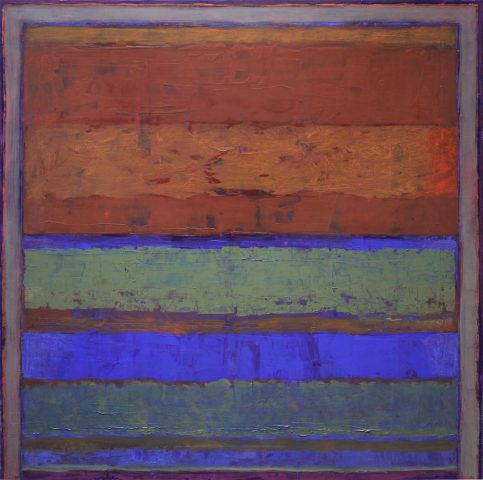 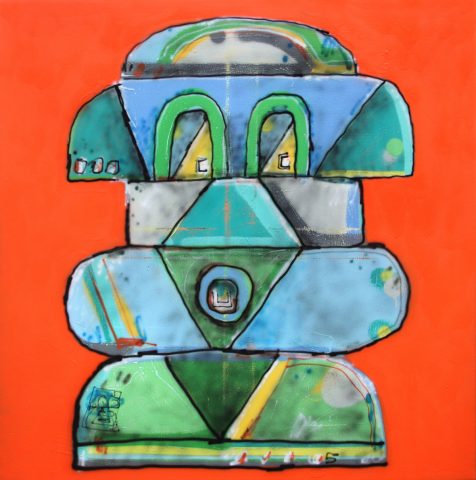 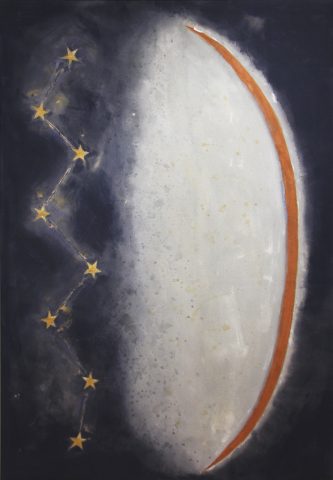 Our March group exhibition features paintings that are saturated with glorious colour.

Chroma is the quality of a colour’s purity, intensity or saturation.  We are exploring the limits of these characteristics through the recently consigned abstract paintings by Ron Martin and David Sorensen with new arrivals by Jonathan Forrest, James Kirkpatrick and William Perehudoff.

Ron Martin is a master of colour and he delivers with his 1972 “Alizarin-Crimson” one-colour red painting and 1970 “World #28”.

The middle gallery offers a restful contrast to the vibrancy of the front gallery.  Will Gorlitz’s euphoric “Axis Mundi” painting is paired with two of Gathie Falk’s “Heavenly Bodies” paintings from 2004.  Both artists look to the sky for inspiration and offer us their vision of transformative landscapes.

Jonathan Forrest is an abstract painter who divides his studio time between Vancouver Island and small town Saskatchewan, Canada.  He was born in Edinburgh, Scotland and immigrated with his family to Canada in 1977.

His work has been shown in Western Canada in museums including the Mendel Art Gallery, Saskatoon, The Edmonton Art Gallery and The Dunlop Art Gallery, Regina.

James Kirkpatrick, born in London, ON in 1977, attended H.B. Beal Secondary School and received his BFA from the Nova Scotia College of Art and Design in 2002. He has exhibited his work extensively throughout the US and Canada including shows in new York, Boston, Los Angeles, San Francisco, Miami, Halifax, Toronto and Vancouver. In 2009 Kirkpatrick was featured in the group show Pulp Fiction, which traveled from Museum London to the MOCCA in Toronto and St. Mary’s University Art Gallery in Halifax. Kirkpatrick was included in the successful Not Bad For London group exhibition at the Michael Gibson Gallery and L.O. Today at Museum London. In 2014 the McIntosh Gallery at Western University mounted a solo exhibition of James Kirkpatrick’s paintings, drawings, video, sound sculpture and installation work. Also known for his participation in the early Canadian graffiti movement and as avant-garde hip-hop artist Thesis Sahib, Kirkpatrick works in a variety of media including drawing, painting, sculpture, zines, mask-making and experimental sound improvisation.

was born near Saskatoon in 1919 and by the mid 1960’s he was considered to be one of Canada’s major abstract painters.  Perehudoff studied with the French artist Jean Chariot at the Colorado Springs Fine Arts Center, Colorado Springs, Colorado, in 1948-49 and with the French Purist Amedee Ozenfant at the Ozenfant School of Fine Arts, New York, New York, in 1949-50.
Throughout the 1950s and 1960s he was an active participant in the Emma Lake Artists’ Workshops and participated in workshops led by Will Barnet (1957), Herman Cherry (1961), Clement Greenberg (1962), Kenneth Noland (1983), and Donald Judd (1968). In 1988 he was a workshop leader at Emma Lake.

His work has been widely exhibited in Canada with museum show at the Mendel Art Gallery, Saskatoon, The Edmonton Art Gallery and the Glenbow Art Gallery, Calgary as well as shows in commercial art galleries across the country.  His work is in private and public collections in Canada, the US and Europe.

Born in Vancouver in 1937, Sorensen first studied architecture with Arthur Erickson and then returned to study at the Vancouver School of Art with Jack Shadbolt and sculptor Bill Reid. Shadbolt, who studied with painter Hans Hoffman, invited the renowned American art critic Clement Greenberg to the school to discuss abstract art. These discussions along with an earlier trip to Europe to see the Abstract Expressionist paintings of Rothko, deKooning, Pollock and Kline influenced Sorensen’s decision to become a full-time artist.

In 1962 he visited Mexico, where he had his first solo exhibition in Mexico City in 1964. Sorensen was attracted to the work of Quebec artists Jean-Paul Riopelle and Armand Vaillancourt and moved to Montreal where he taught, painted and exhibited frequently. Sorensen, now Professor Emeritus, taught visual art at Bishop’s University from 1981-2000.

Over Sorensen’s long career he had countless exhibitions across Canada and has shown his work in Switzerland, France, Italy, Japan, China and the US. In 2005, the Musee du Bas Saint-Laurent in Riviere-du-Loup, QC curated a 45 year retrospective of Sorensen’s work. In 2007 (and 2010) Sorensen exhibited large works at the Mexican Embassy Gallery ‘Espacio Mexico’ in Montreal and had paintings from his Horizon Series sent on a tour of museums and cultural centers throughout Mexico.

David Sorensen passed away in Montreal in 2011.

Gathie Falk was born in Alexander, Manitoba in 1928. Her parents were German-speaking Mennonites who immigrated to Canada in order to escape persecution in Russia. Shortly after Gathie’s birth, her father died, leaving the family impoverished and forcing them to move repeatedly to various mennonite communities across Canada. For a short time, the family moved to Winnipeg, setting in Vancouver in 1947.

In the 1950s, Falk studied education at the University of British Columbia and worked as an elementary school teacher for 12 years. During this time, Falk also began her formal training in the arts. She took summer classes at UBC and studied drawing and painting with JAS MacDonald. In 1965, Falk left her position as a teacher and decided to pursue a career as a full time artist.

Working in painting, sculpture, installation and performance, Gathie Falk has repeatedly explored motifs of the domestic and everyday, choosing running shoes, fruit, eggs and clothing, among other objects, as her subject matter.

Falk is well represented in collections across the country, including those of the Vancouver Art Gallery, the Glenbow Museum, the Winnipeg Art Gallery and the Musée d’art contemporain de Montréal.

In 2013, Gathie Falk was awarded the Audain Prize for Lifetime Achievement in Visual Arts. She is also the recipient of the Gershon Iskowitz Prize (1990), the Order of Canada (1997), Order of British Columbia (2002) and the Governor General’s Award in Visual and Media Arts (2003).

As a representational painter, Gorlitz deploys an engaged painterly approach that foregrounds visuality just as it critically pursues a discourse with other media technologies. His metaphorical subjects entwine personal experience with broader cultural matters.