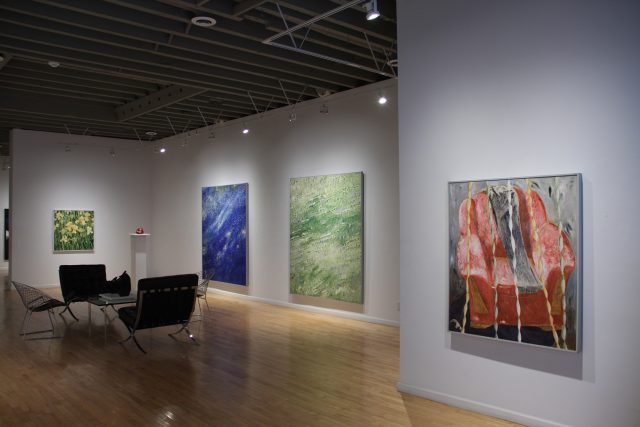 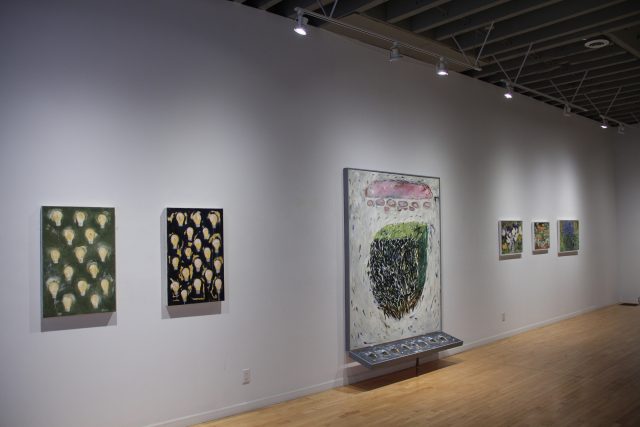 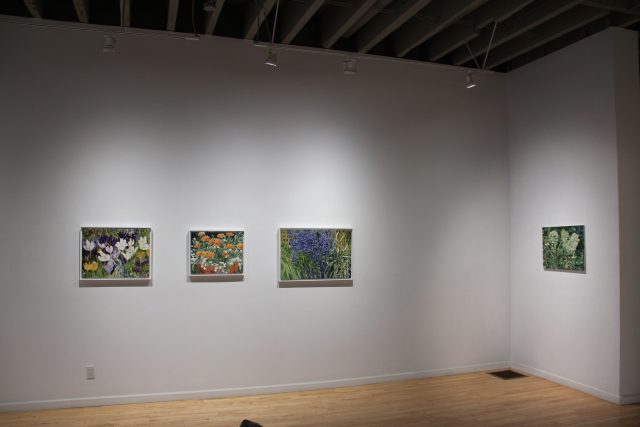 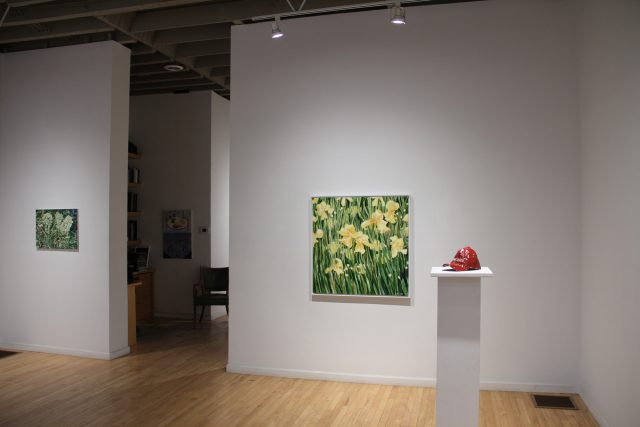 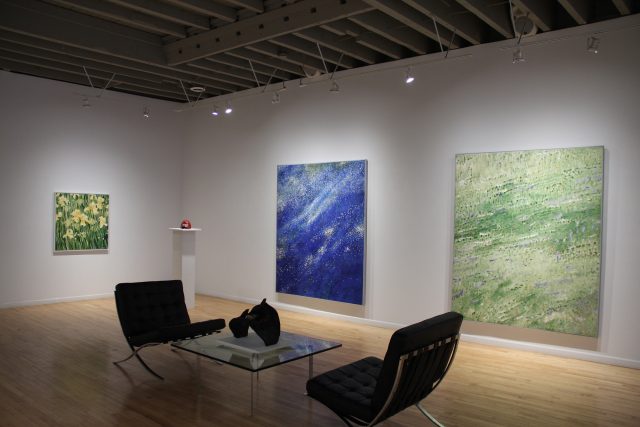 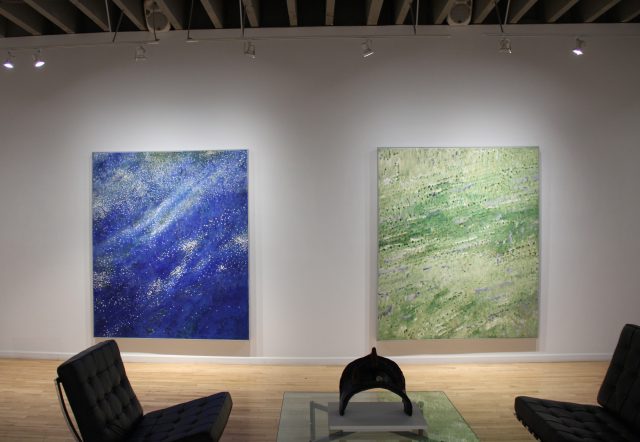 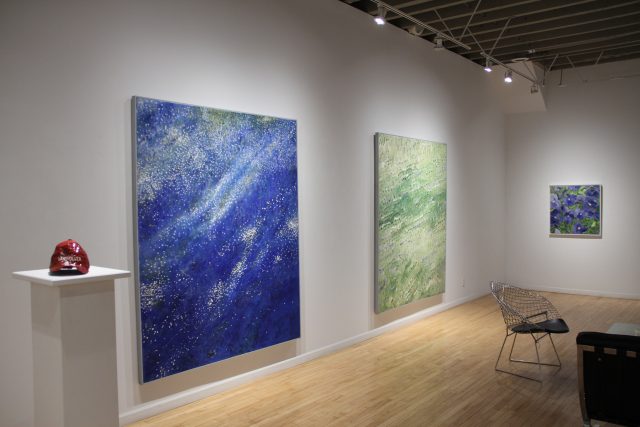 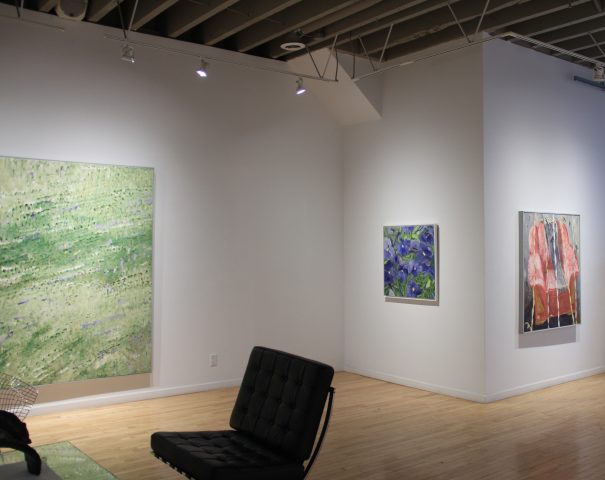 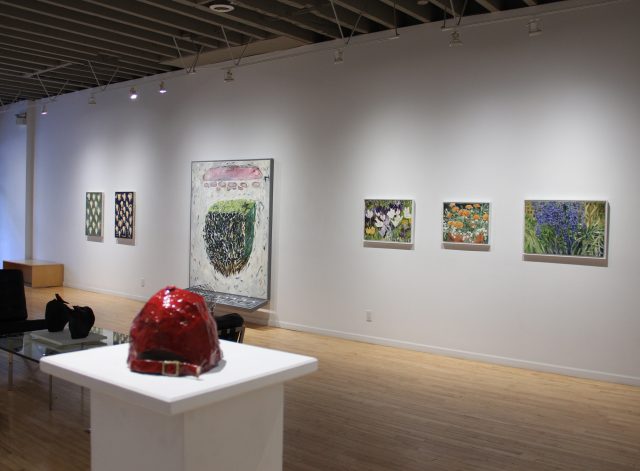 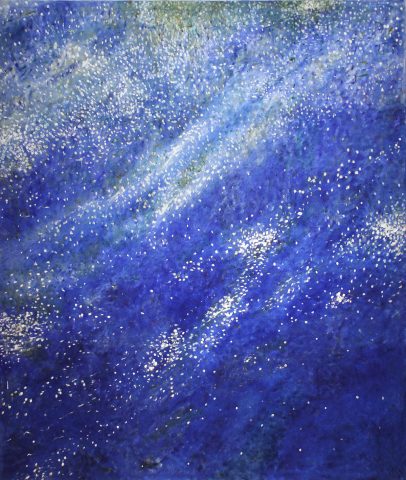 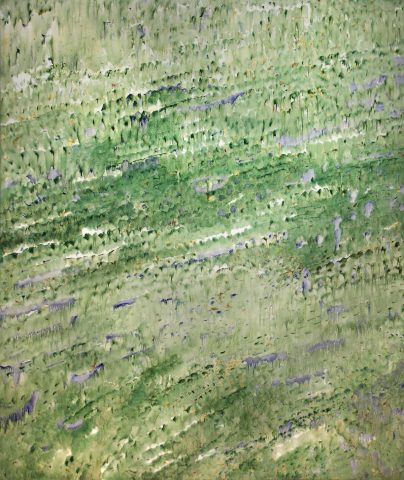 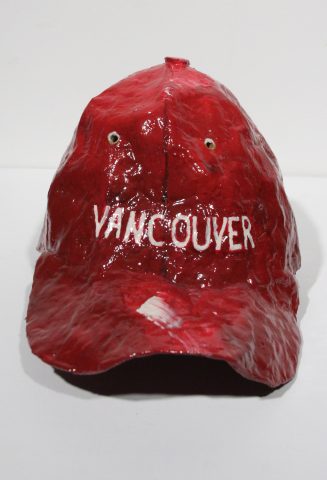 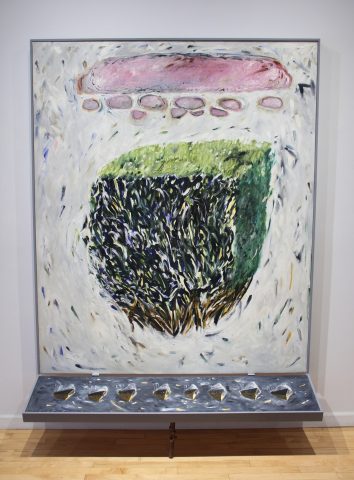 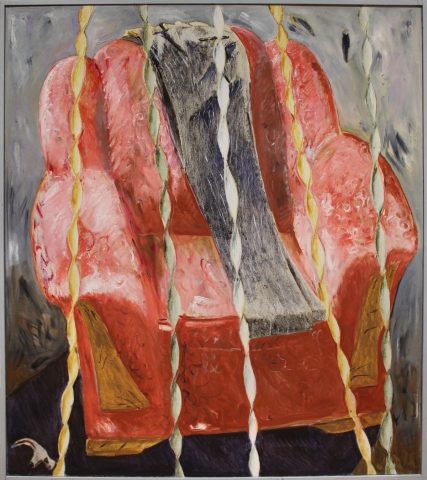 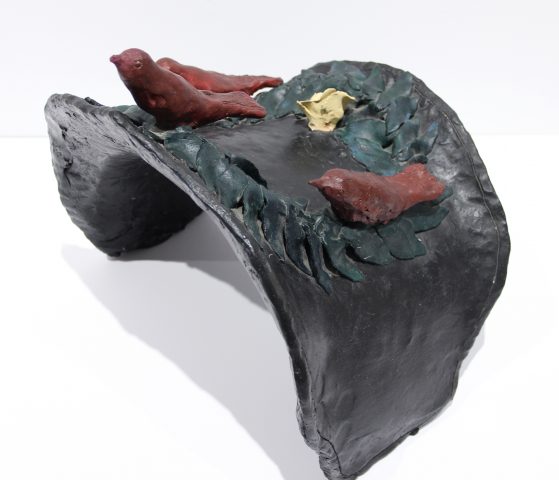 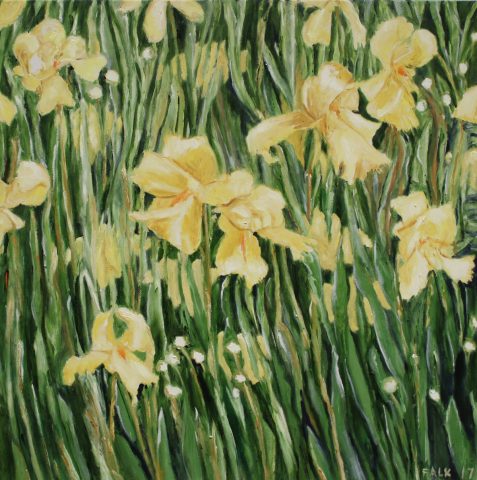 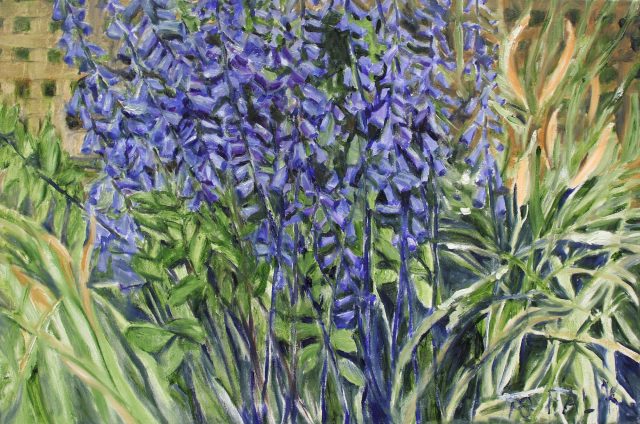 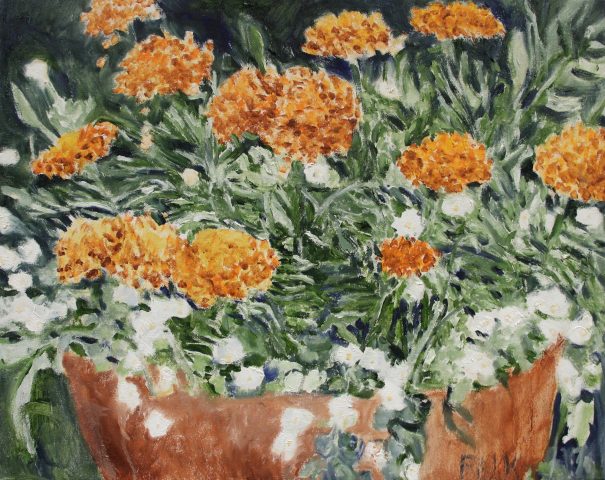 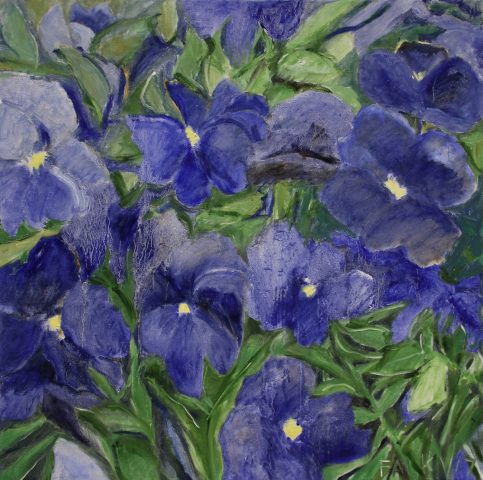 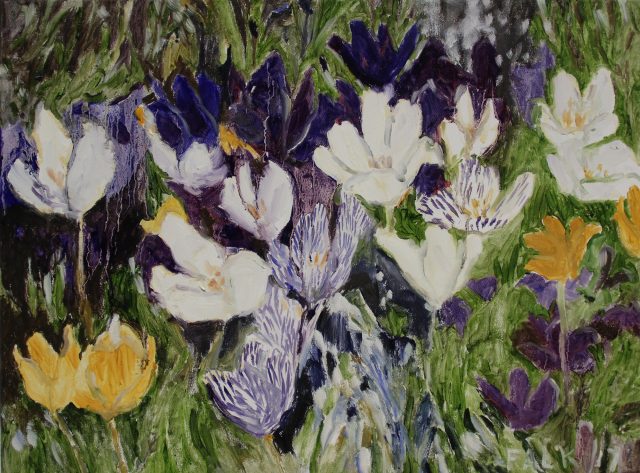 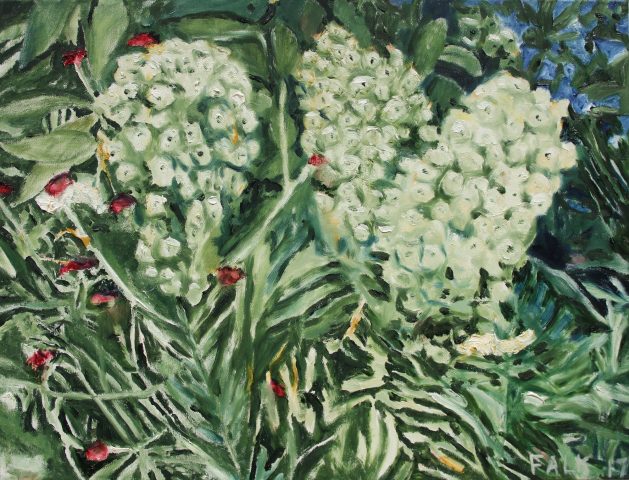 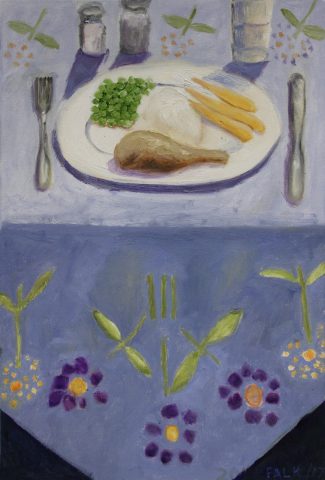 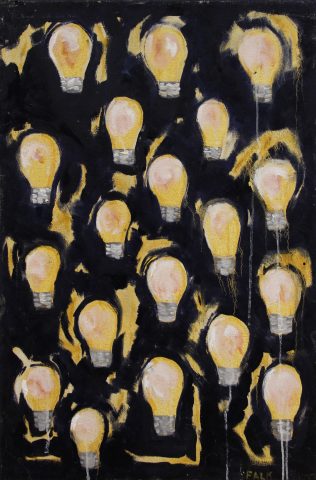 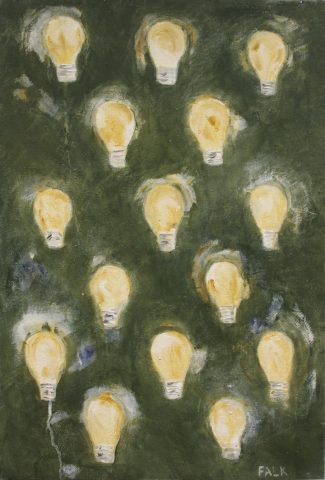 Gathie Falk is known for her paintings and sculptures that “venerate the ordinary” and celebrate everyday simple pleasures.  Through her artwork, Falk elevates ordinary objects and appreciates the joy and love for the things and people in her life.  For this exhibition, which includes work dating from 1974-2018, we are highlighting new floral paintings of her lush backyard garden.  Lovingly tended by her friend Elizabeth, the garden separates her home from her studio and is a joyful celebration of summer life in Vancouver.

The earliest work in the exhibition is the only available ceramic sculpture from Falk’s 1974-1975 “Saddles” series.  The saddle form acts as a resting place for common still-life objects.  In our example, “Saddle with Birds”, the three red birds and a beautiful yellow rose are perched delicately on top.  Her presentation of repeated symbols is reinforced with the two paintings of “Lightbulbs” from 1993, where she takes the humble light bulb and paints them in a pattern that is reminiscent of a night sky full of stars.

From 1986, our “Soft Chair with Pants & Hammer Heads” contrasts a bulky soft-contoured red living room chair with a pair of men’s trousers and a hammer head.  Growing up in the 1930s and 1940s, the living room became a pride of place, a comfort for the family and a symbol that there was a father in the house.  This chair combines an invisible portrait of a man with the celebratory paper streamers left over from Christmas family celebrations.  Falk has stated that she “sees the world as sculpture” and she has painted this chair with great sculptural weight.  The series of “Soft Chairs” paintings were exhibited at the 49th Parallel Gallery in New York and Isaacs Gallery in 1987.

From the 1980s, along with the Soft Chair, we have two spectacular “Pieces of Water” paintings from 1981 and 1982.  “Pieces of Water” are personal views of small chunks from Falk’s Vancouver ocean-side environment.  Here, Falk removes any reference to land or the horizon line, and instead pretends to cut into the ocean rectangular pieces of water, and paints the surface of each unique view.  The subtitles for each painting reference the dominant news items of the day.  “Pieces of Water #3: Parliament Bells” was included in the 1985-1986 touring survey exhibition “Gathie Falk: Paintings 1978-1984”.

In the early 1990s Falk painted a suite of hinged paintings called “Hedges and Clouds“.  Each view records the number of ships, barges, freighters or warships that Falk observed anchored in English Bay each day.  The number of vessels (recorded on the horizontal plane), is juxtaposed with a large hedge and bulky clouds that Falk would look through to the ocean beyond.  As a pacifist, Falk is not making any specific political comment, rather she is observing the presence of the ships among her everyday rituals.

The papier-mache baseball hat, entitled “Gathie’s Vancouver” from 2003, is from a series of papier-mache hats and watercolours made from baseball hats that Falk borrowed from friends, colleagues and collectors.  They ultimately became expressive portraits of the original owners, conveying the personality and character of each friend.  “Gathie’s Vancouver” represents a self-portrait, a lovingly rendered cherry red sculpture of her beloved city.

Gathie Falk was born in Alexander, Manitoba in 1928. Her parents were German-speaking Mennonites who immigrated to Canada in order to escape persecution in Russia. Shortly after Gathie’s birth, her father died, leaving the family impoverished and forcing them to move repeatedly to various mennonite communities across Canada. For a short time, the family moved to Winnipeg, setting in Vancouver in 1947.

In the 1950s, Falk studied education at the University of British Columbia and worked as an elementary school teacher for 12 years. During this time, Falk also began her formal training in the arts. She took summer classes at UBC and studied drawing and painting with JAS MacDonald. In 1965, Falk left her position as a teacher and decided to pursue a career as a full time artist.

Working in painting, sculpture, installation and performance, Gathie Falk has repeatedly explored motifs of the domestic and everyday, choosing running shoes, fruit, eggs and clothing, among other objects, as her subject matter.

Falk is well represented in collections across the country, including those of the Vancouver Art Gallery, the Glenbow Museum, the Winnipeg Art Gallery and the Musée d’art contemporain de Montréal.

In 2013, Gathie Falk was awarded the Audain Prize for Lifetime Achievement in Visual Arts. She is also the recipient of the Gershon Iskowitz Prize (1990), the Order of Canada (1997), Order of British Columbia (2002) and the Governor General’s Award in Visual and Media Arts (2003).

Falk continues to live and work in Vancouver.