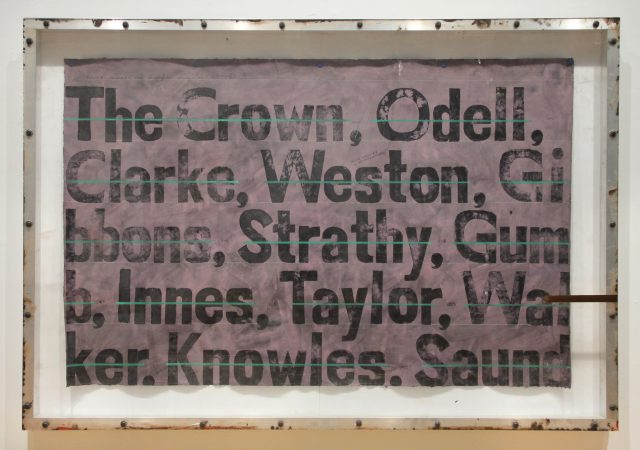 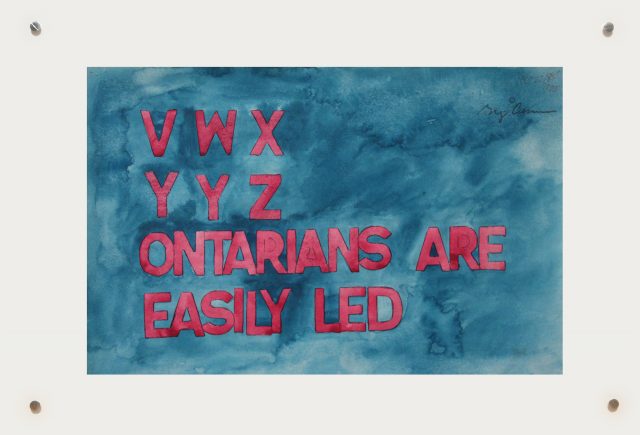 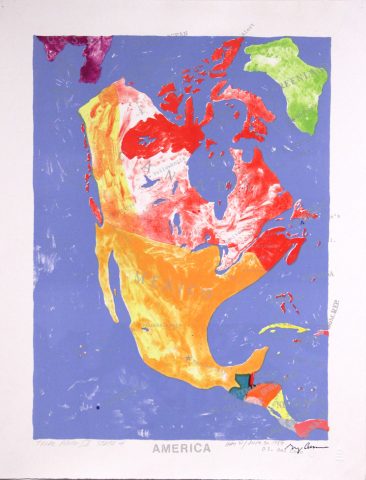 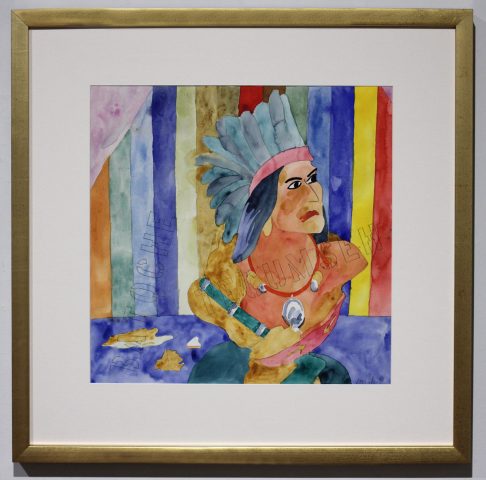 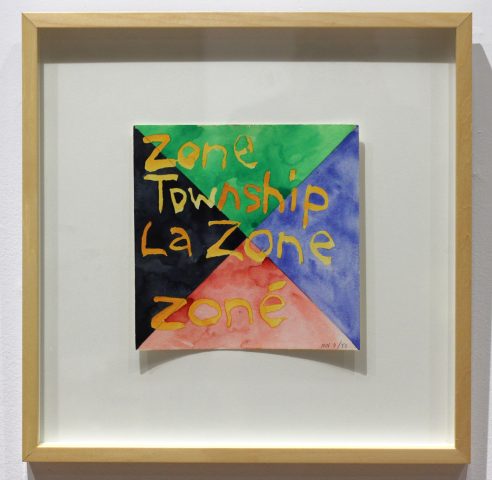 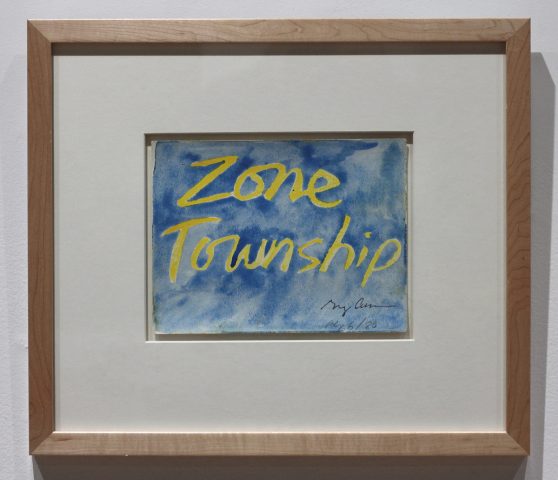 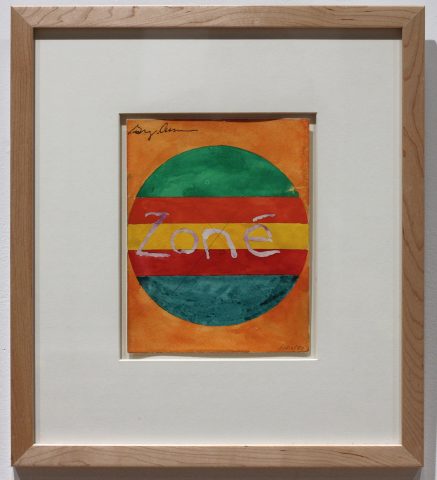 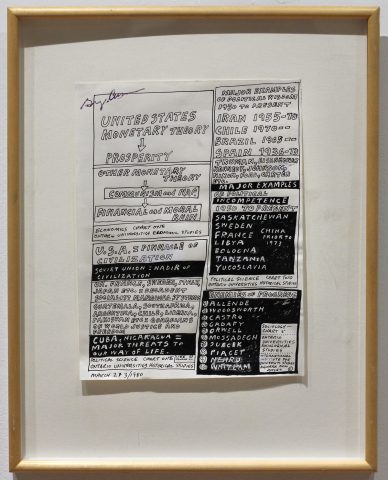 For Art Toronto 2020 we have focused on Greg Curnoe’s interest in place, history, his surrounding environment and his politics.

Greg Curnoe was many things: Pop-artist, Regionalist, musician, painter, writer… the list goes on.  All of his work, however, deals with the everyday and is often auto-biographical.  He observes, comments and records through both images and words.  His text based works are bold statements of conceptual art as you need to read in order to “see” the image.  The lettered works are some of his strongest and we are featuring a key text based painting created within the last year of Greg’s life.

“(Mis) Deeds #1” is from a series of 5 large lettered stamp pad ink and watercolour paintings that explored the history of his property on Weston Street in London, ON.  In the Fall of 1990 there were legal questions concerning the Eastern edge of his property.  This started a 2 year long quest to trace the history of the property by searching the deeds and abstracts of the property records.  His research took him all the way back to the Paleo-Indian Period (8600 BCE).  He also interviewed descendents of settlers and First Nations Peoples.  The resulting 5 watercolours list the names, in order, of each property owner.  “(Mis) Deeds #1” was the first one completed and interestingly not in chronological order of ownership.  Perhaps it was “The Crown” that Greg wanted to start with.  Curnoe described: “We live in a culture where pre-existing cultures lived and live.  They have survived in isolation from the culture of the City of London, both within the city and in areas of original settlement that date back to around 1690, fifteen miles away.  They have been omitted from most books of local history”.  Through the “Deeds” watercolours and the subsequent books “Deeds / Abstracts” and “Deeds / Nations”, Curnoe had a new understanding of his Canadian identity.

Throughout his career, Curnoe had an ongoing interest in the history of Indigenous Peoples in Canada.  Many works reference Louis Riel and the Shawnee hero Tecumseh.  He personally visited the battle sites, hung postage stamp Louis Riel curtains in his studio and owned a bust of Tecumseh.  The watercolour “Tecumseh with Batoche Fragments” is from 1980 and part of the “Zone” series of watercolours.  Zone Township is outside of London where Tecumseh was killed in 1813 at the Battle of the Thames.  Greg visited the site as well as Batoche Saskatchewan, the historic battle site which resulted in the defeat of Louis Riel and his Métis forces.  Here, in the watercolour, he combines both leaders, paying tribute to their bravery and untimely deaths.  Zone is also important because of Greg’s interest in the French poet and Dada champion Apollinaire.  In 1913 Apollinaire wrote a poem called “Zone” that is about a walk in Paris in which the poet moves from 1 zone to another.  Greg made a series of watercolours repeating the word Zone, some written with a french accent, thereby connecting his interest in place, history and Dada.

The other lettered watercolours that we are featuring reveal Greg’s sense of humour and his politics.  In November 1987 Greg had a pivotal exhibition at YYZ Gallery in Toronto called “I Tell Stories”.  The all-text based exhibition brought new attention to his work.  He re-emerged on the Toronto scene and his work was now re-contextualized within a conceptual framework.  He wrote: “Are you going to be able to see my show at the YYZ or will I have to describe it to you? – since it’s all texts and poems I could send them to you – but since they are also paintings, I can’t – but, I think you will like the quotes I have invented for Brian Mulroney, like “Anti-Americanism is a crime against nature”.  The free trade agreement was happening at the time of their making and Greg disliked the agreement.  The watercolours reveal Curnoe’s tongue-in-cheek nature and his passion for the Canadian national identity.

Perhaps one of his most iconic images is “America”, a lithograph made at the Banff Centre in July 1989.  Here, Curnoe has re-drawn the map of North America, omitting the United States.  Growing up 2 hours away from the US/Canada border, Curnoe was heavily influenced by US culture and was aware of border disputes.  The statement by removing the US matches his views on cultural imperialism.