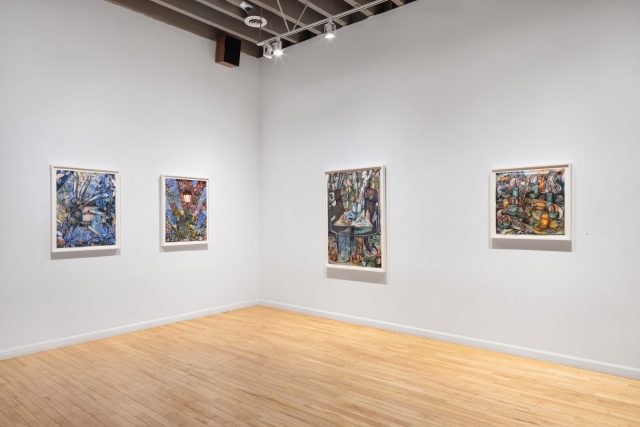 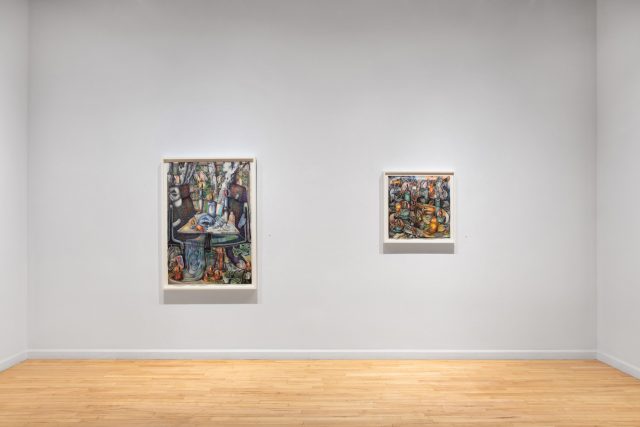 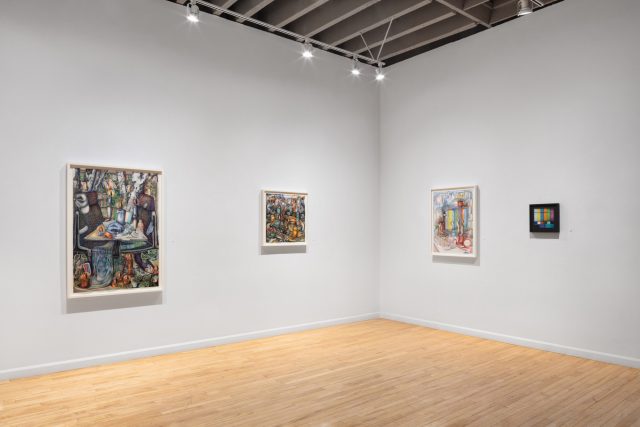 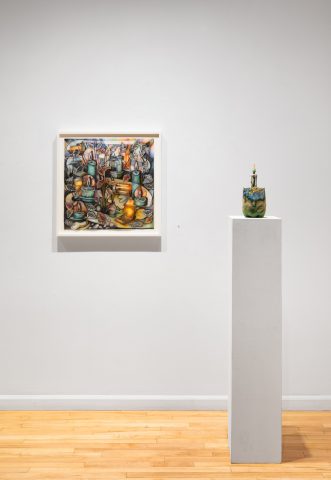 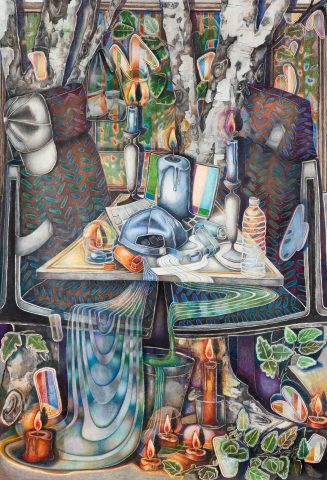 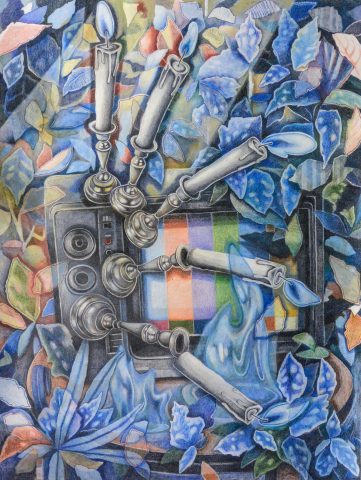 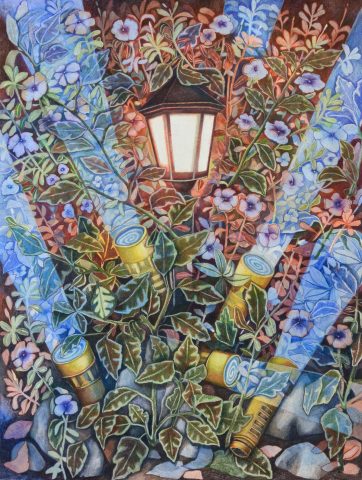 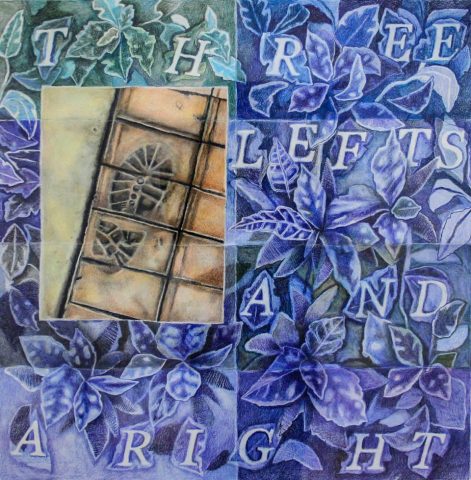 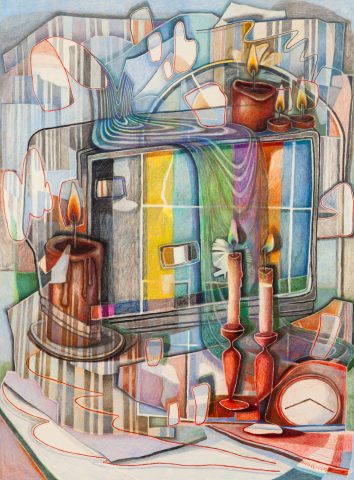 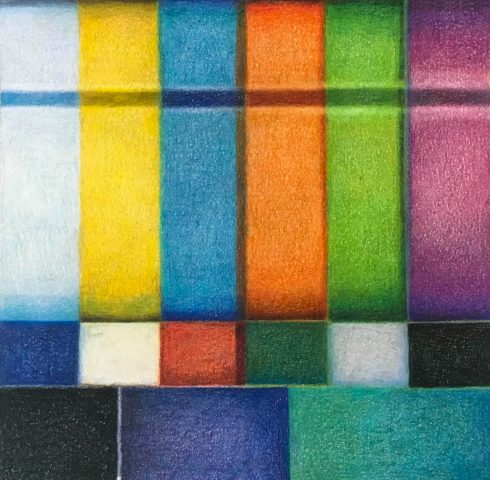 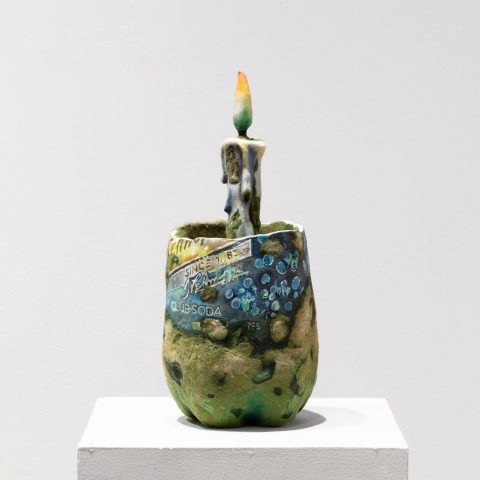 Our middle gallery exhibition for the month of April features new works on paper by Jenna Faye Powell. Through the intricate work, Powell explores the role of fiction in our lives by treating perception as a form of artistic composition.

Powell’s current project is based on the literary concept of ‘genre blindness’, a trait that is demonstrated when a character acts as if they have never experienced the kind of narrative they occupy — when the story’s protagonist continues to go to work or pays taxes in the wake of an apocalyptic narrative. Demonstrating a lack of access to the story we are in, a secondary symptom of ‘genre blindness’ appears as a cartoonish-devotion to optimism in the wake of adversity.

This exhibition consists of drawings depicting the residual actions of a fictional cast never shown — a group of optimists contending with an apocalyptic genre they reject, or are at least blind to. Presented as staged scenarios, works feel vaguely-survivalist — designed like a fulcrum that pivots between the world as it is and as it could be. Between the certainty of the status quo and the precariousness of envisioning what part ‘future us’ might play in the sci-fi story of society’s future. A carefully chosen lexicon of objects and symbols allude to an insinuated-catastrophe, as candles burn low, and messages of the ‘Emergency Broadcast System’ use up the residual hums of electricity. Crafted with a light-heart, these nondescript environments act as vessels to consider themes of sanctuary, mental health, and survival.

Places without a past, actions without agents — Powell’s drawings act as conduits for narrative speculation. When engaged, they can lead to introspective places where stories are revealed, where stories collide – and where ‘double fiction’ emerges as a possible concept to describe how personal, lived experiences coalesce with current, cultural narratives to create new fictions. Steeped in a dizzying, otherworldly ether, works in this show challenge our capacity to be self-aware in the wake of implied-disastrous situations.

Jenna Faye Powell is an artist, writer, and arts administrator based in Toronto. Powell has a MFA degree from NSCAD University (2012) and a BFA degree from University of Western Ontario (2009). Powell continues to exhibit nationally — notably Brave New Worlds at Museum London, the Windsor-Essex Triennial at the Art Gallery of Windsor, and Blue Monday at Robert McLaughlin Gallery. Powell was a finalist for the 2012 RBC Painting Competition, and recently completed a residency at the Vermont Studio Centre.

Deeply rooted in fiction and narrative, Jenna Faye Powell’s practice champions the view that humans are natural storytellers, cognitively wired to understand and make meaning out of experience by narrating it. Powell frequently looks to the fantastical, not to escape reality, but to be further engaged with it. Her artistic endeavors seek to find the extraordinary in the ordinary, frequently confronting cynicism with a cartoonish devotion to optimistic pursuits.