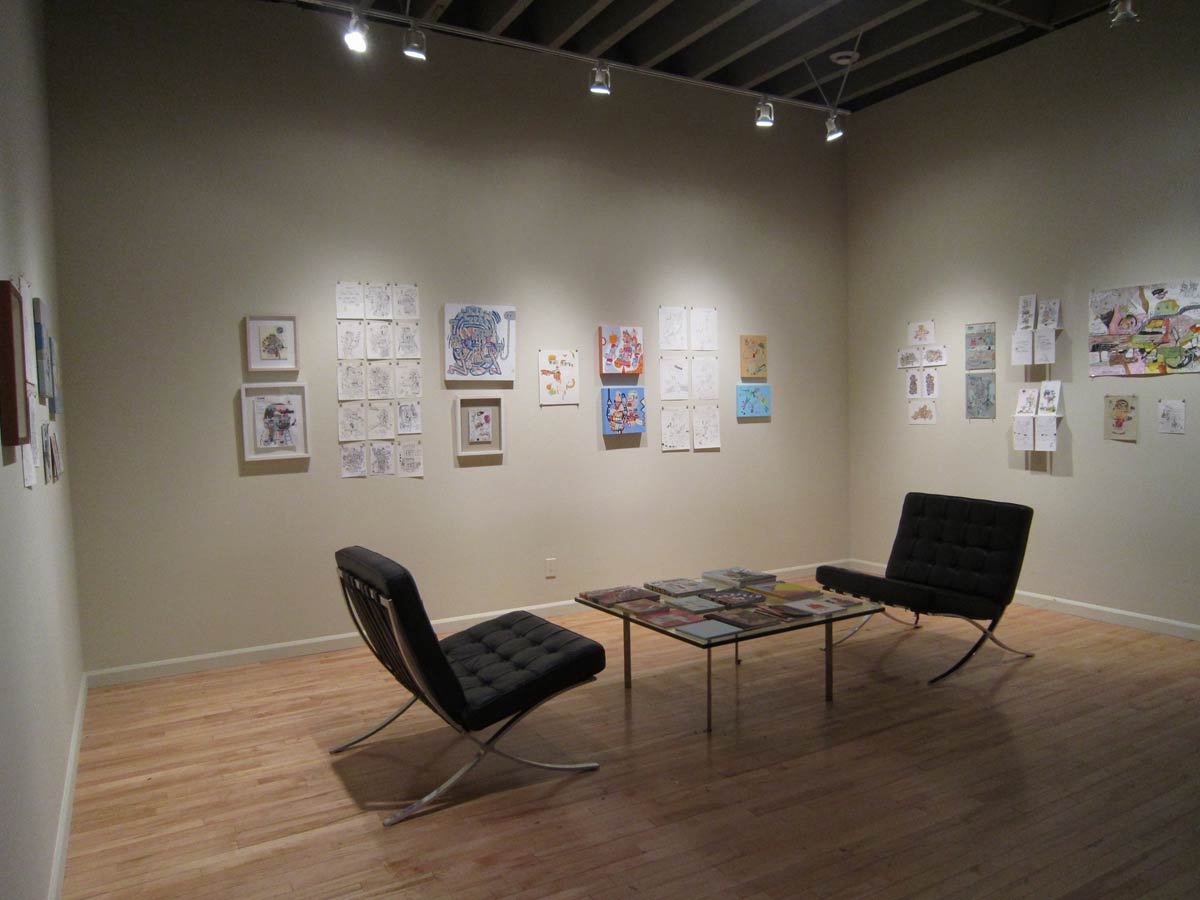 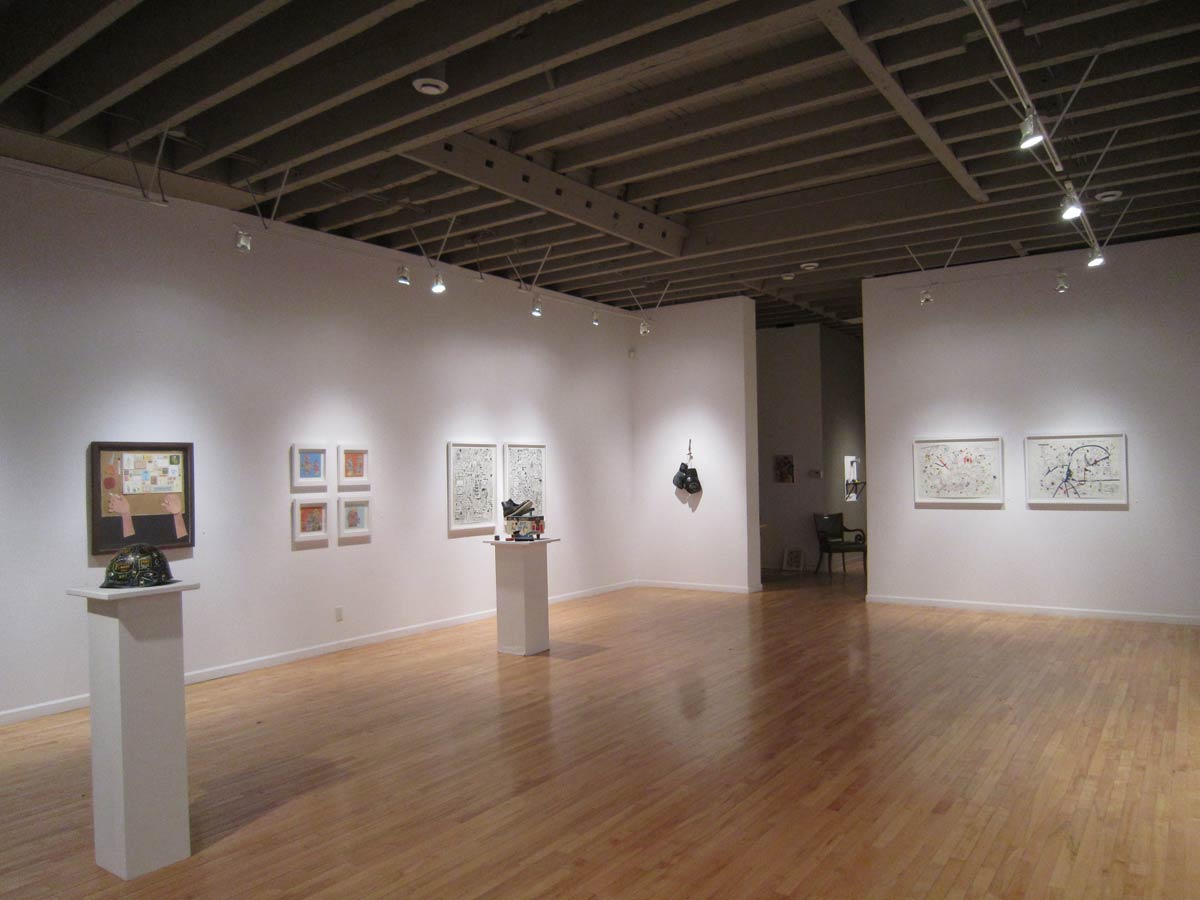 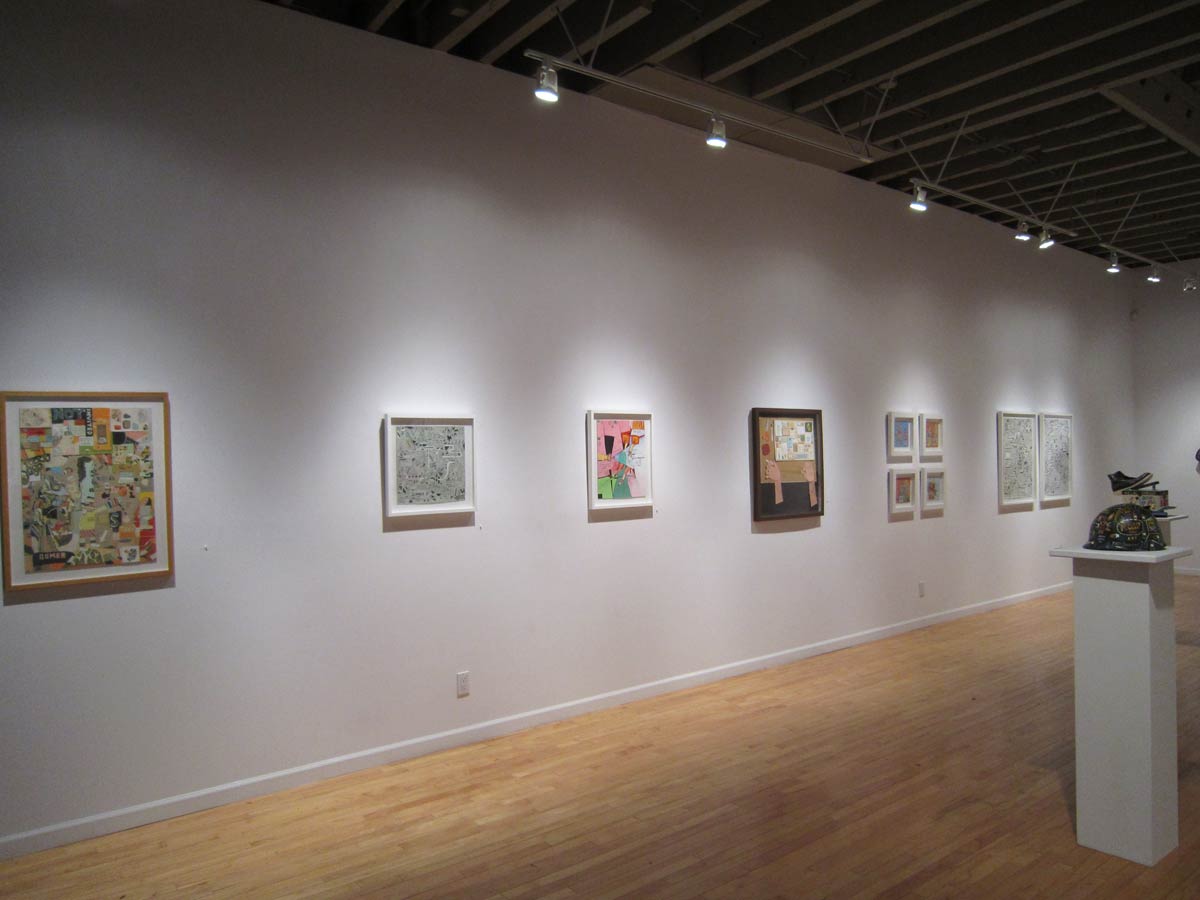 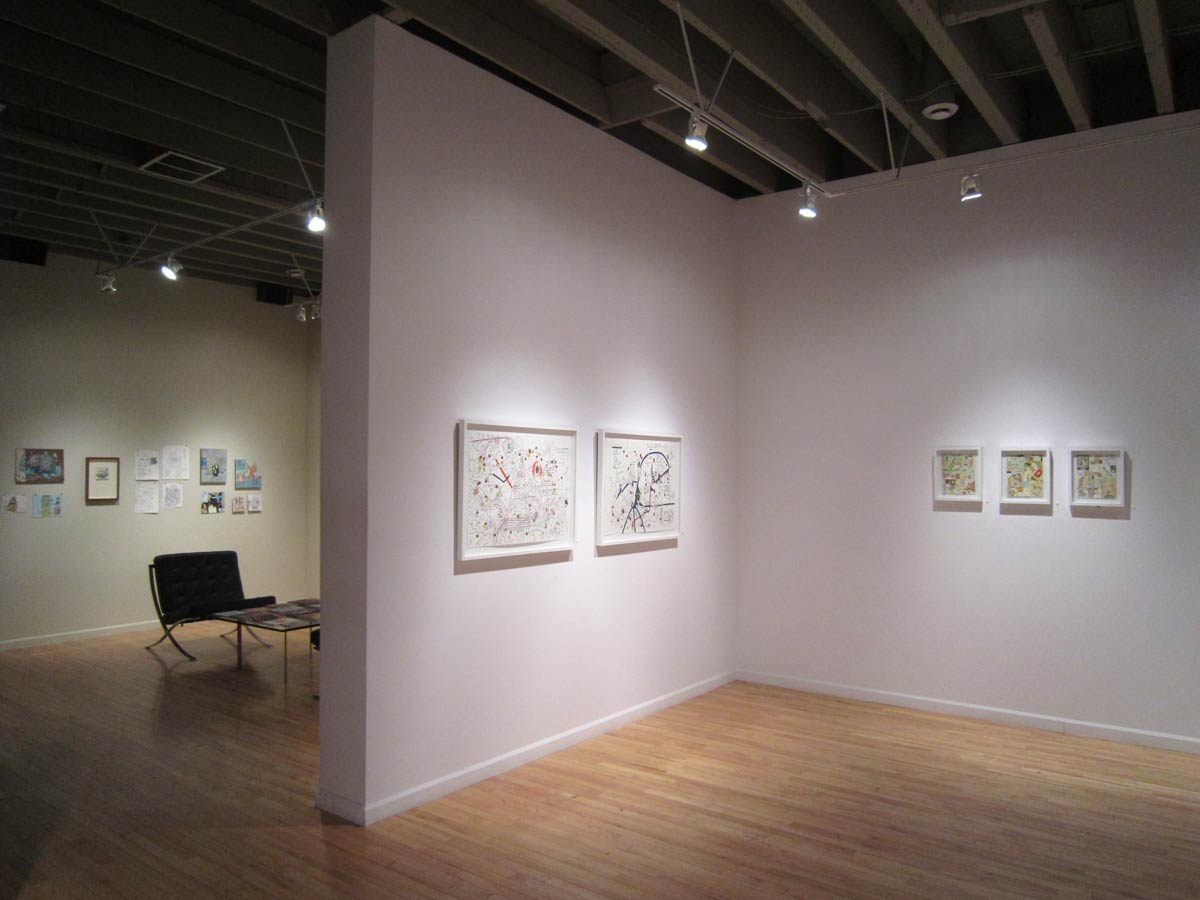 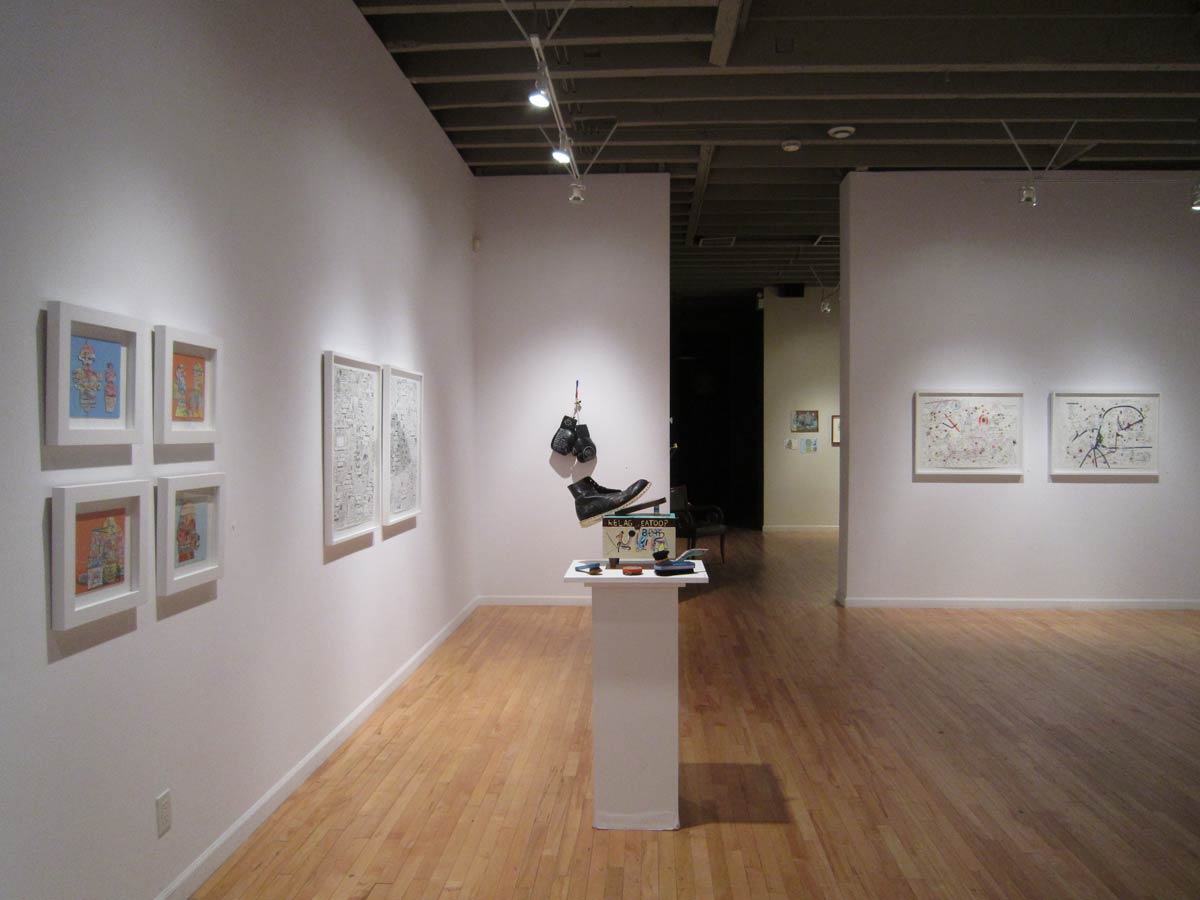 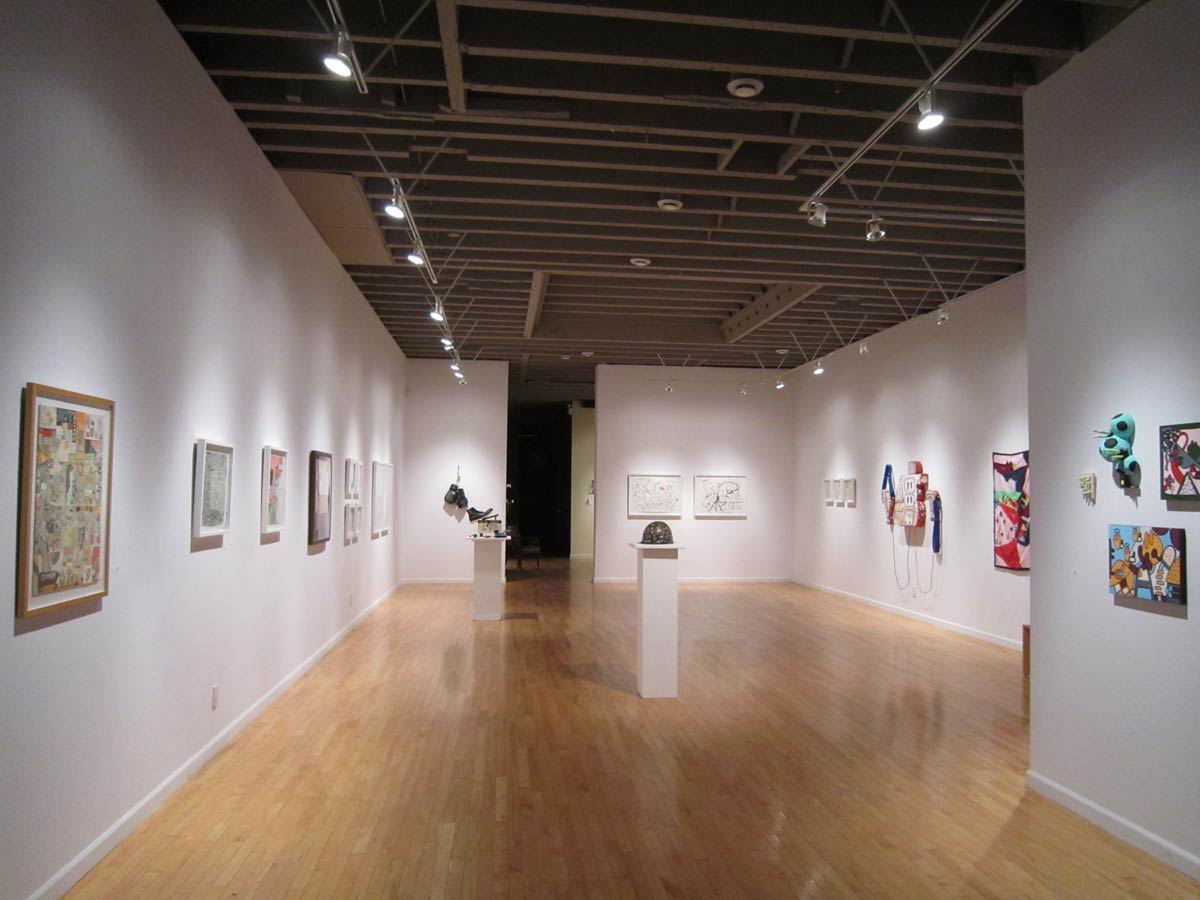 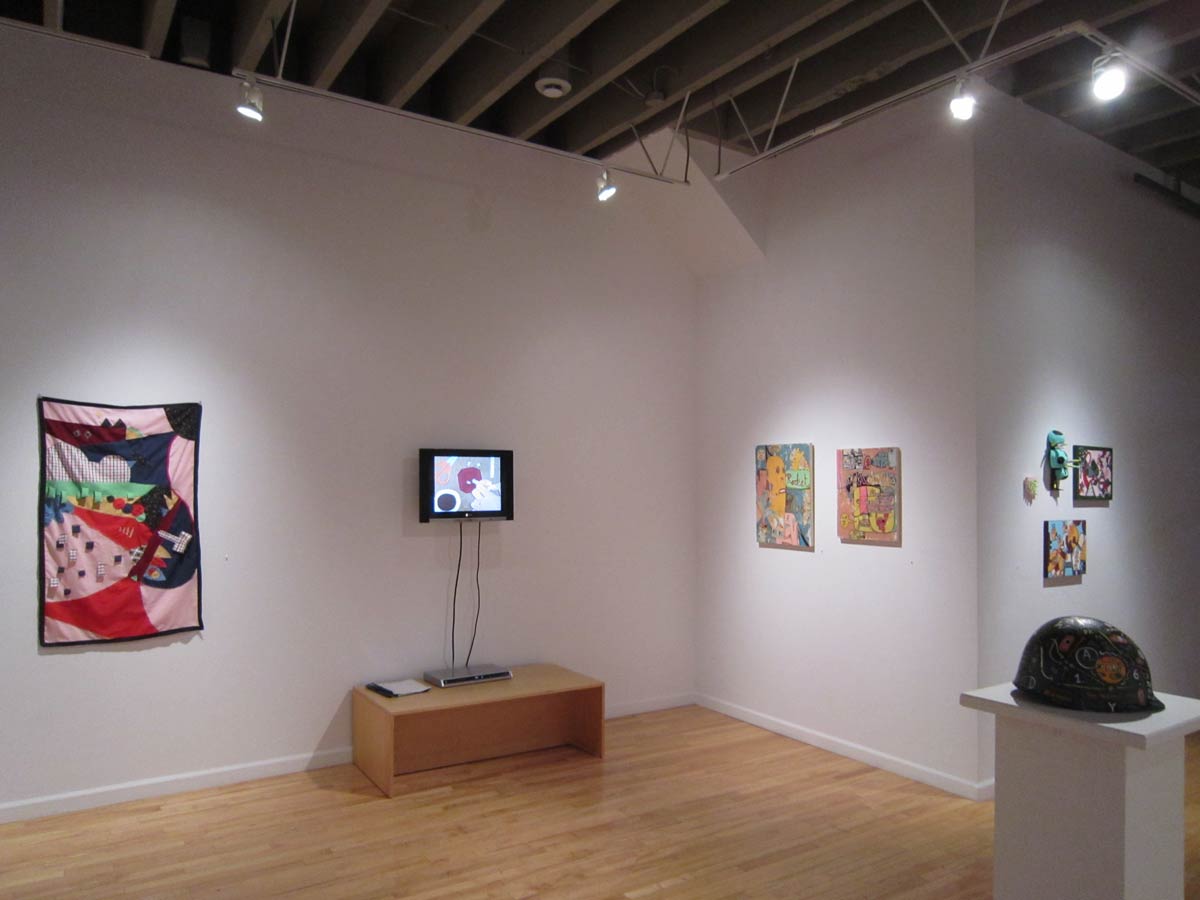 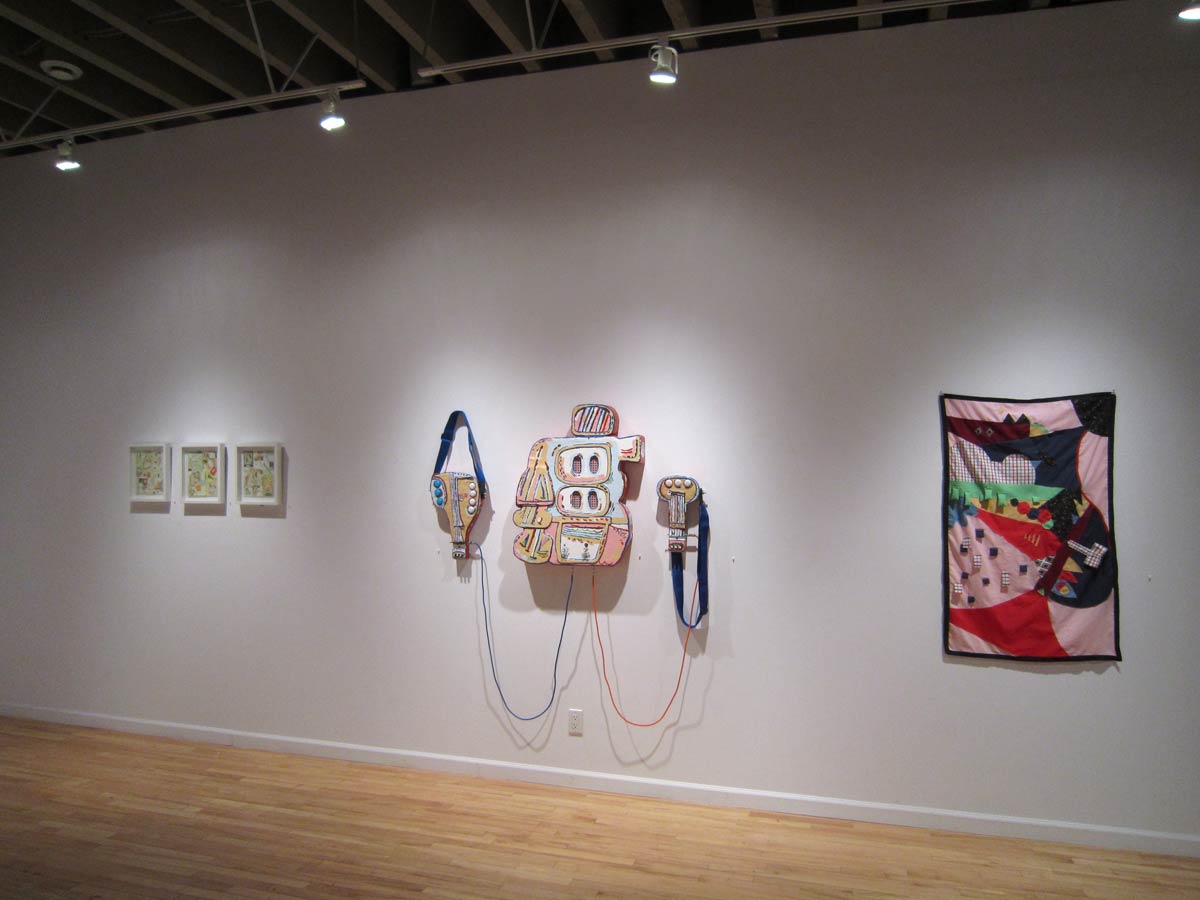 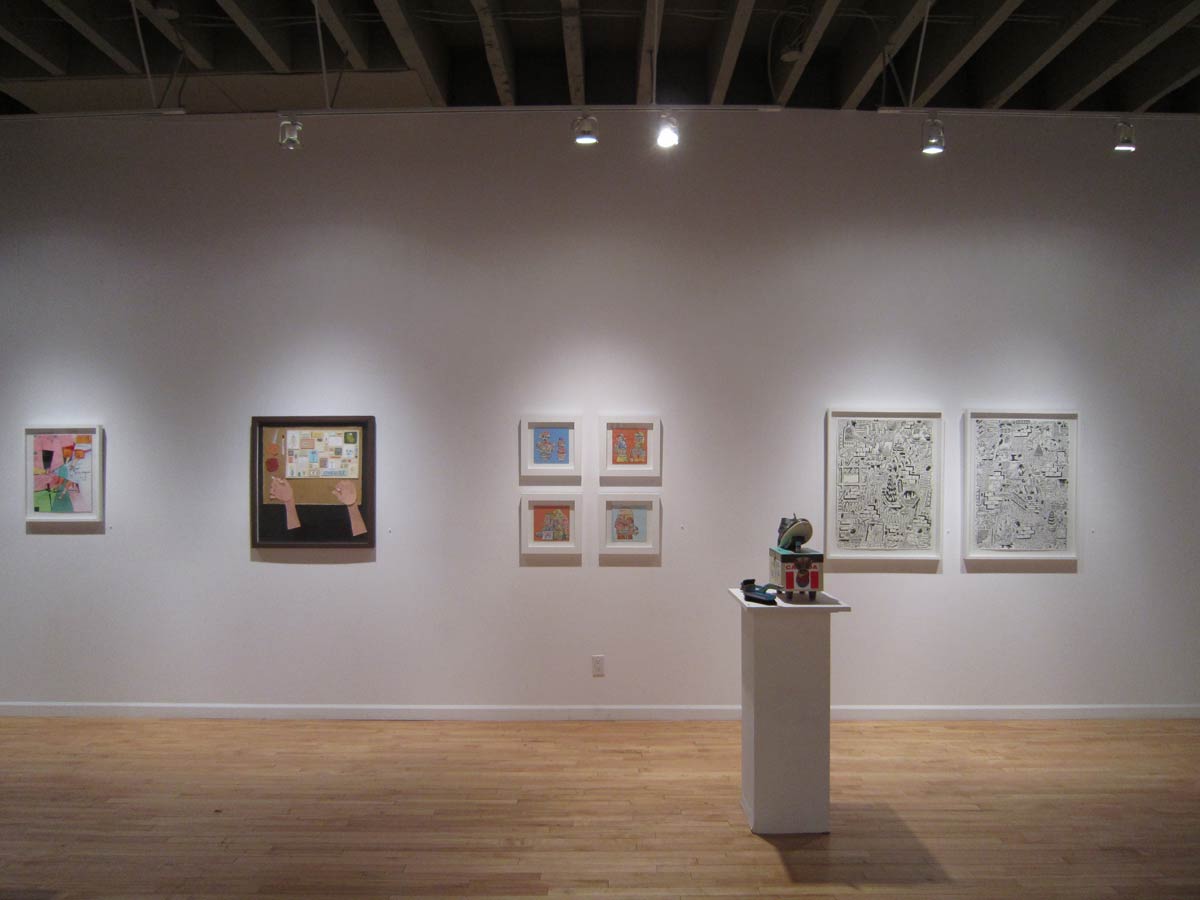 The title Not Bad For London is based on a Jason McLean drawing where a lone tree sits next to a forked river called The Thames. The tree has big googley eyes and a flowing head of hair. But, most importantly, the tree, has roots.

Living and working as an artist in London can sometimes have its challenges. We are situated between the dynamics of Toronto and Detroit, in a city where Greg Curnoe, Paterson Ewen and Jack Chambers became national icons. Perhaps, then, it is the history, and the fact that London is a challenging place to live, that so many artists have chosen to work and stay.

Not Bad For London celebrates a group of young artists who acknowledge this past, but have forged ahead, creating their own identity and relevance. These seven artists are multi-dimensional; they draw, paint, sculpt, make films, installations, zines & sound art. Working alone or together in collaboration, their art creates an imaginary world based on the places they visit, the colours they see and the noises they hear. With this exhibition, you are invited to discover how each artist uses their own and their shared experiences to reflect the world in which we live.

Not Bad For London was curated by Jennie Kraehling. Many thanks to Wyn Geleynse.

Marc Bell was born in London, Ontario in 1971 and attended H. B. Beal Secondary School with Jason McLean and Peter Thompson. Hot Potatoe (sic), a monograph of his recent art and comics work was published by Drawn and Quarterly in the Fall of 2009. He was the editor of Nog a Dod: Prehistoric Canadian Psychedoolia (Conundrum Press, 2006), a survey of contemporary self-published art booklets in Canada and the co-editor of Japanada, the 5th issue of The Ganzfeld (Picture Box, 2007).

Marc Bell has exhibited in solo shows in Paris, Amsterdam, New York and Vancouver. Recently his work was included in the group shows Walpurgis Afternoon at Lawndale Art Center (Houston,Texas) and La Migra! At Vice Mexico (Mexico City). Reviews of his work have appeared in the New York Times, LA Weekly, The Walrus and Globe and Mail. His work is in the Dakis Joannou Collection, Owens Art Gallery and Saint Mary’s University Art Gallery.

James Kirkpatrick, born in London, ON in 1977, attended H. B. Beal Secondary School and received his BFA from the Nova Scotia College of Art and Design in 2002. He has exhibited his work extensively throughout the US and Canada including shows in New York, Boston, Los Angeles, San Francisco, Miami, Halifax, Toronto and Vancouver. In 2009 Kirkpatrick was featured in the group show Pulp Fiction, which traveled from Museum London to the MOCCA in Toronto and St. Mary’s University Art Gallery, Halifax.

Also known as the graffiti artist and rapper, Thesis Sahib, Kirkpatrick works in a variety of media including drawing, painting, avant-garde hip-hop and electronic music, sound sculpture, zines, comics, and mask-making. His paintings incorporate sculptural, kinetic, and auditory elements, as he combines his 2D aesthetic with circuit-bent electronic toys. Likewise, compositions written on modified Gameboys and circuit-bent sounds have become part of his music and on-stage performances.

Amy Lockhart is a filmmaker, animator and artist, whose artwork and award winning films have been exhibited and screened internationally. Born in Winnipeg, MB, Lockhart studied at the Nova Scotia College of Art and Design and has been a resident artist at Calgary’s Quickdraw Animation Society, Strutts Gallery, The School of the Art Institute of Chicago and The California Institute of the Arts. Her work has received international acclaim and been collected by public and private art institutions and film festivals across the globe. Lockhart has received fellowship at the National Film Board of Canada and support from the Canada Council for the Arts. She is currently working on her Masters of Fine Arts at the University of Guelph.

Jason McLean was born in London, ON in 1971. After attending H.B. Beal Secondary School with Marc Bell and Peter Thompson, McLean graduated from the Emily Carr Institute of Art and Design, Vancouver in 1997. He has exhibited nationally and internationally including shows at the Vancouver Art Gallery, Fondazione Bevilacqua La Masa in Venice, Art Gallery of Nova Scotia, Loyal Gallery in Malmo Sweden, and at Richard Heller Gallery in Santa Monica. He has work in major collections throughout North America including the Museum of Modern Art, Vancouver Art Gallery, Bank of Montreal Collection and the Royal Bank of Canada. In 2004 McLean was chosen by Macleans Magazine as one of the top 10 artists to watch in Canada.

Jamie Q works in a variety of media including painting, drawing, zine-making, printmaking, and sculpture. She has shown her art in exhibitions across Canada, including her first major solo show, Make-Believe, at Toronto’s Art Metropole in 2010. Internationally, her sculptures have been included in Family Shirt, a 2011 exhibition of contemporary Canadian art in Malmö, Sweden; and in Dirtstar 2011: Take Root, as part of the National Queer Arts Festival in San Francisco. She has also distributed her solo and collaborative art zines across Canada, and internationally in the United States and Turkey. Jamie Q holds a BFA from the Alberta College of Art & Design (2002) and an MFA from The University of Western Ontario (2010). Originally from Edmonton, via Calgary and Montreal, she now lives and works in London, Ontario. In addition to her solo practice, she works collaboratively with James Kirkpatrick as the art team Dusty Peas.

Peter Thompson was born in London, Ontario in 1970 where he attended H.B. Beal Secondary School with Marc Bell and Jason McLean. In 2009 Thompson’s work was featured in the traveling group show Pulp Fiction at Museum London and MOCCA, Toronto. Thompson has also exhibited in San Francisco, New York, Portland and Seattle and was recently included in Family Shirt at Krets Gallery in Malmo, Sweden. Known for his drawings, Thompson’s collection of drawings, The Chonicles of Lucky Ello, were published by Drawn and Quarterly in 2004. He was also included in Nog a Dod: Prehistoric Canadian Psychedoolia (Conundrum Press, 2006), a survey of contemporary self-published art booklets in Canada. Thompson’s work is in the Dakis Joannou Collection and the St. Mary’s Univeristy Art Gallery. He enjoys sitting on your couch, drawing, and drinking your beer.

Billy Bert Young was born in London, Ontario in 1983. He graduated from H. B. Beal Secondary School in 2003, where he was introduced to the drawings and zines of Marc Bell and Peter Thompson and the graffiti work of James Kirkpatrick’s (AKA Thesis Sahib). In 2004 he moved to Halifax, Nova Scotia where he graduated with a BFA from the Nova Scotia College of Art and Design with a major in printmaking. While in his second year at NSCAD he purchased the book NOG-A-DOD: Prehistoric Canadian Psychedooolia, an anthology of like-minded artists edited by Marc Bell. In this book he was introduced to the work of Jason Mclean and Amy Lockhart, among others. During his time in Halifax he exhibited work in several group and solo shows. In 2008 he moved back to London to be close to family and to work with local artists that had influenced his work in the past. Since then he has made collaboration a main component of his practice; creating zines, drawings and murals alongside fellow artists such as James Kirkpatrick, Jason McLean, Jamie Q, and Peter Thompson.

JASON McLEAN is NOT BAD FOR LONDON

BILLY BERT YOUNG is NOT BAD FOR LONDON