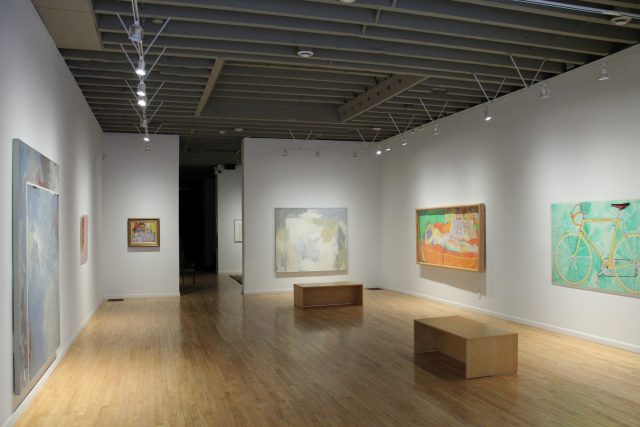 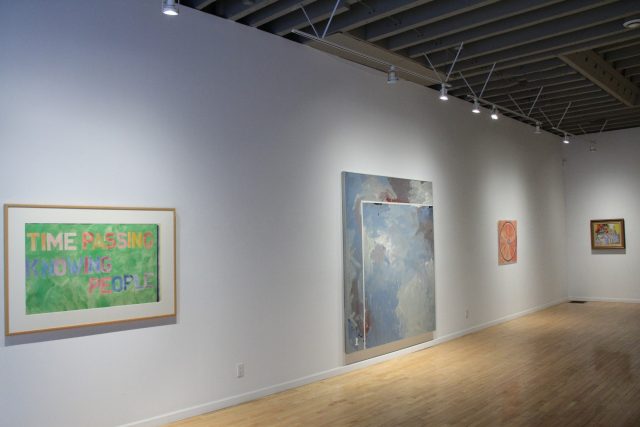 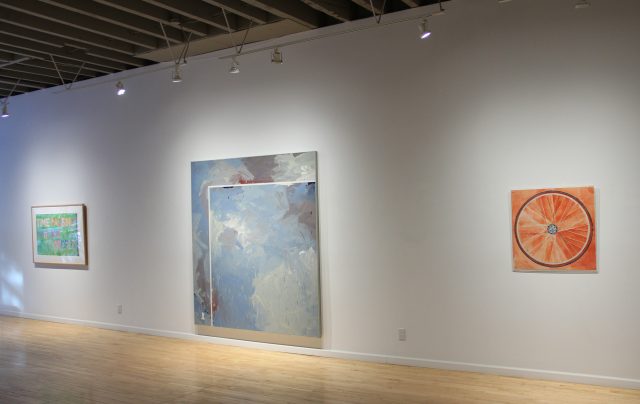 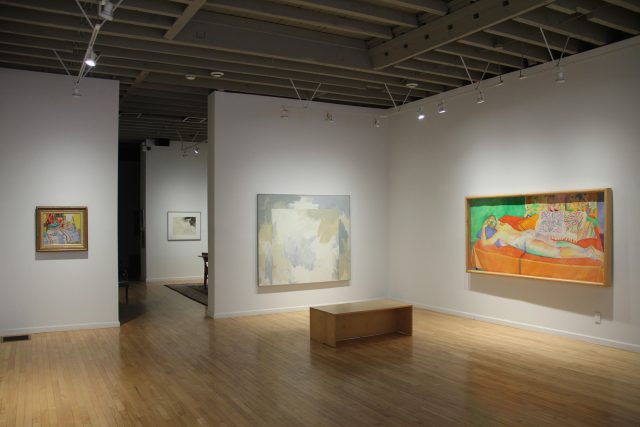 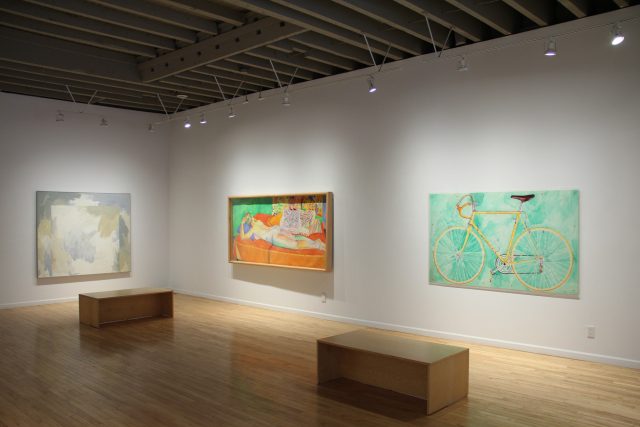 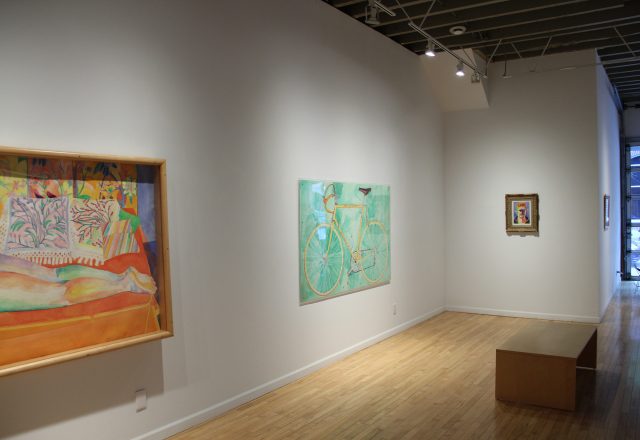 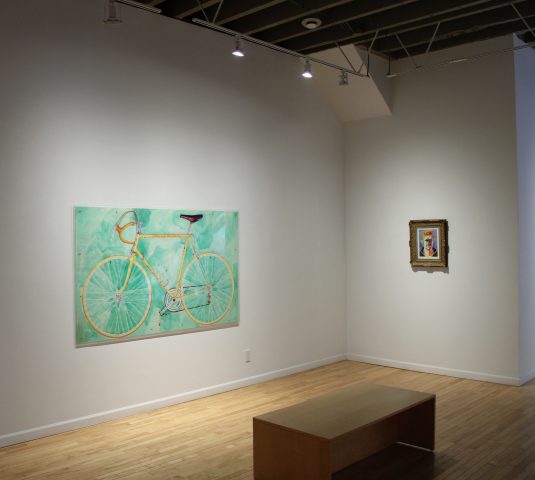 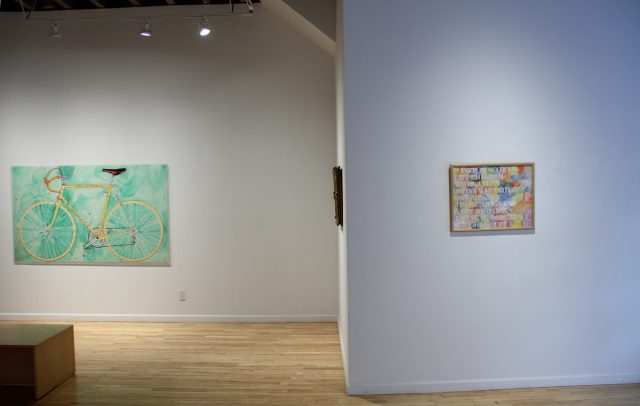 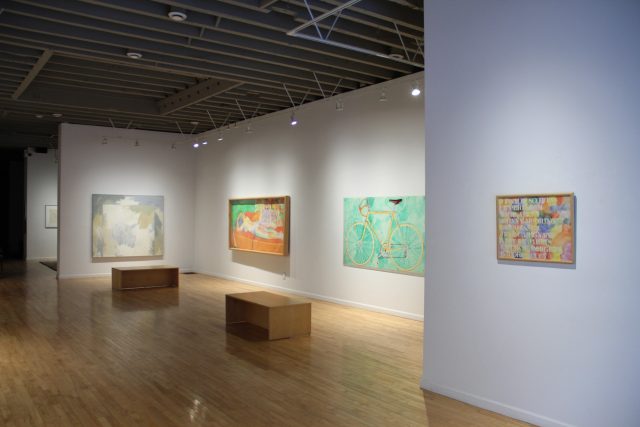 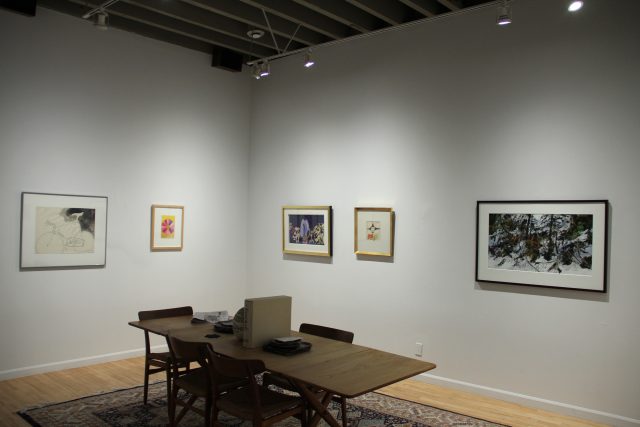 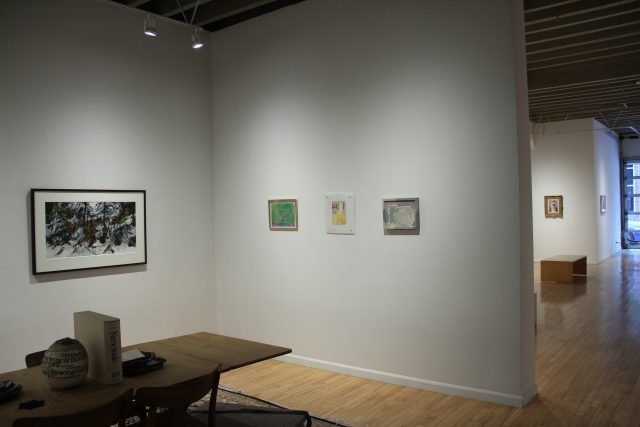 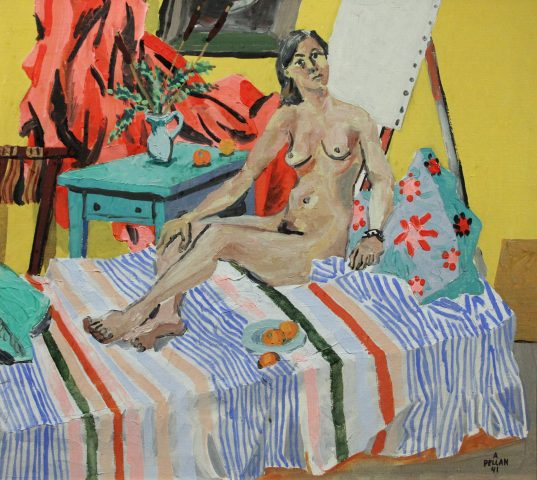 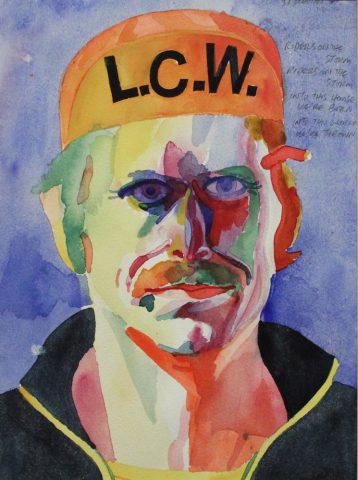 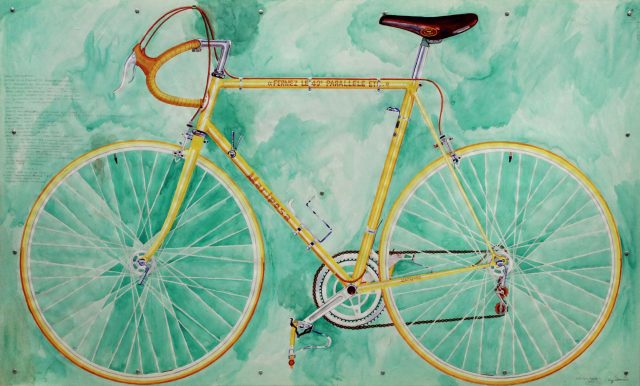 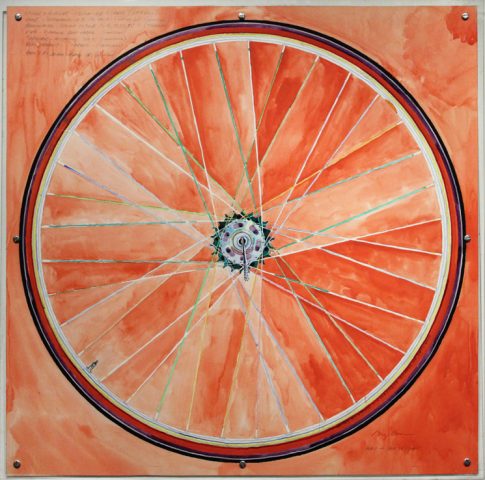 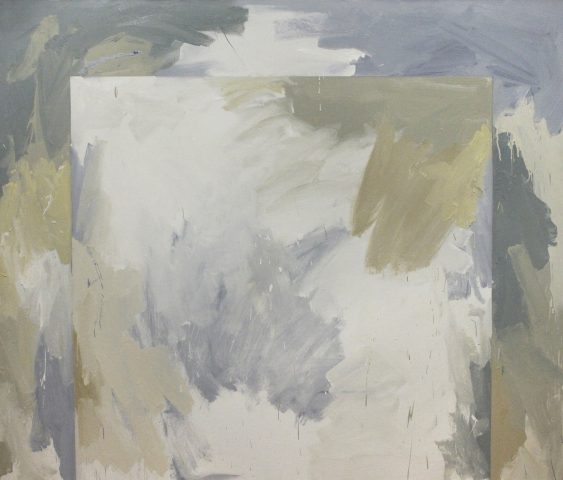 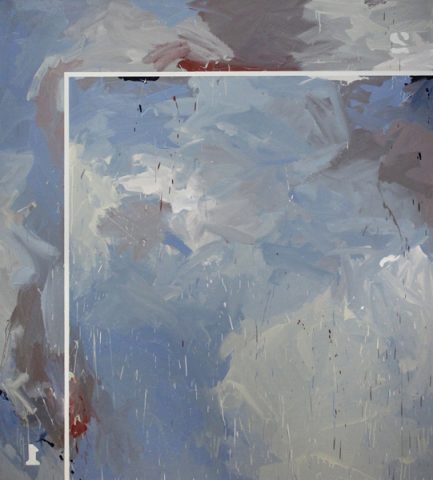 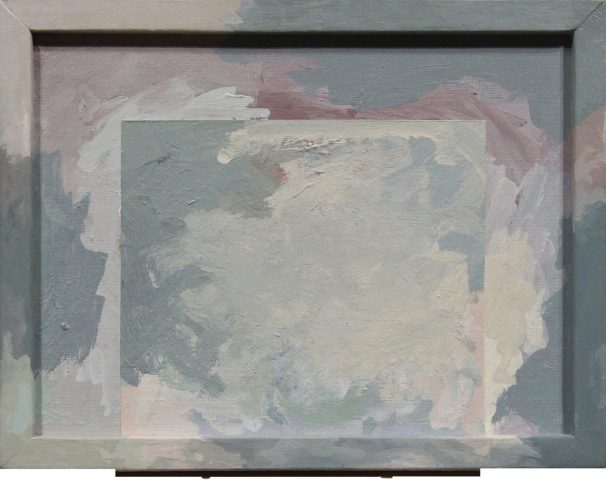 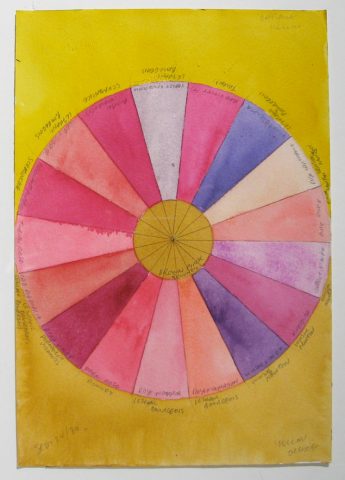 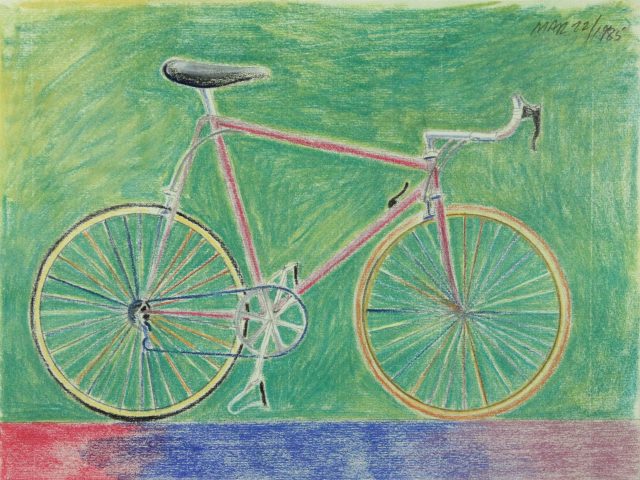 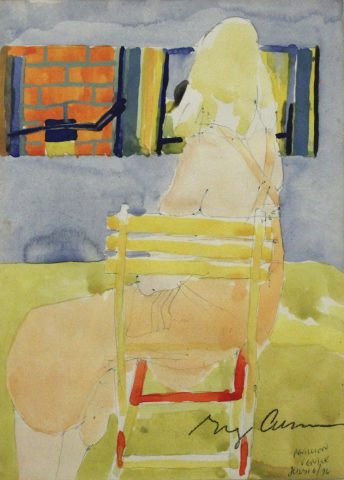 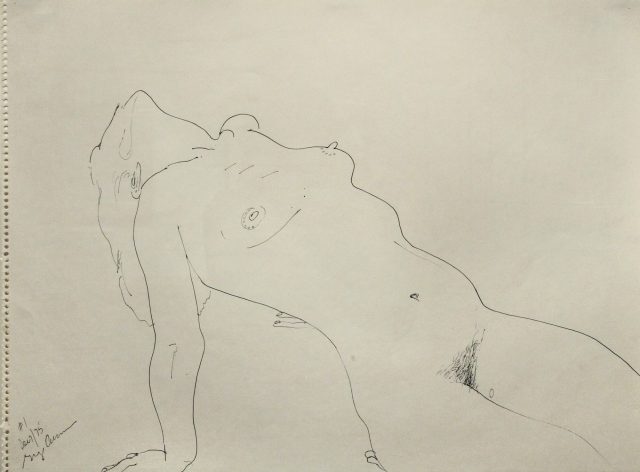 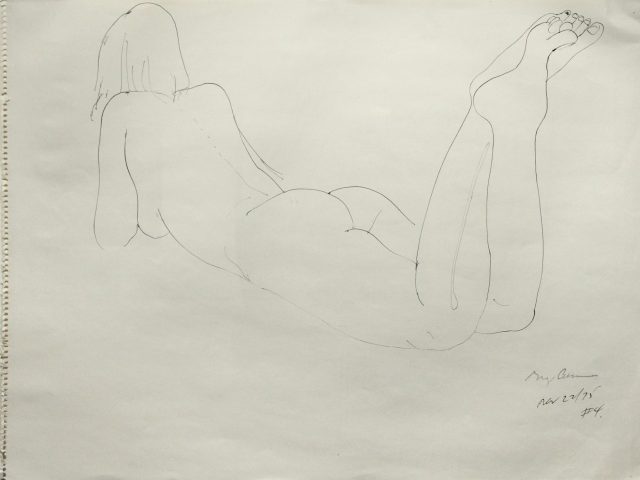 For the month of June we are pleased to exhibit rarely seen works by Greg Curnoe and also feature three paintings by Charles Gagnon, both from the collection of Mr. Roy L. Heenan.

Roy Heenan first met Greg Curnoe in 1974.  Over the years, Heenan developed a close relationship with Curnoe and collected many of his works. While visiting Montreal, Curnoe would often get together with Roy Heenan, curator Pierre Théberge and artist Charles Gagnon.

Walk-Through video of exhibition “The Life of a Bike”:

In 1973 Greg Curnoe started his first life-sized watercolour painting of a bicycle in his Weston Street studio in London. Roy Heenan became Founding Partner and Chairman of Heenan Blaikie. Charles Gagnon began his important Markers/Marqueurs series of paintings. Pierre Théberge was in his 7th year as curator at the National Gallery of Canada. I, was in Grade 9.

Greg Curnoe, Charles Gagnon, Roy Heenan, Pierre Théberge and I have all been connected through our mutual love of art. Both Pierre and Roy were very important people for Greg and Charles. Greg was very much a Londoner and Charles was very much from Montreal. Both were born and died in the cities that they loved.

It is highly unlikely that Greg and Charles would have ever met and become friends without the influences of Pierre Théberge and Roy Heenan. Through the cities of London, Montreal and Ottawa, the four became professionally connected, which benefited them all.

Without the creation of the great works by Greg Curnoe and Charles Gagnon, the curation and loyalty of Pierre Théberge, and consistent patronage of Roy Heenan, this exhibition would not be possible. Thank you to Greg and Charles for making inspiring art. Thanks to Pierre for your great vision and support of both artist’s careers. Roy and Rae Heenan are the glue that has allowed all of this to happen in 2016. It is a great honour for me to present these two artists together in “The Life of a Bike”.

(Our show title follows the path of the Mariposa 10 Speed, #1 from Greg’s London studio, to Isaacs Gallery in Toronto, to Roy’s house in Montreal, and back to the Michael Gibson Gallery in June 2016. This watercolour was the first of many more, and a lot has happened to the four men since 1973).

Greg Curnoe (1936-1992) was a London, Ontario artist known for his pop-inspired artwork based on everyday experiences. Curnoe was an ardent regionalist and a vocal artist-activist. From the early 1960s his career flourished with major nationally touring shows and invitations to Biennials in Paris, Sao Paulo and Venice. An avid cyclist, Curnoe painted watercolour portraits of his bicycles and wheels. These paintings, along with his countless self portraits and works of his wife Sheila and family, document with obsessive detail the intricacies of his life. Tragically, Curnoe was killed on November 14, 1992 while riding his bright yellow Mariposa bicycle.

Charles Gagnon (1934-2003) was one of the generation of Montreal artists born during the 1930s that included Tousignant, Molinari and Gaucher. Gagnon stood out from the others, exploring various media such as film, photography, collage, box constructions as well as painting. At a time when other Montreal artists were looking to Paris, Gagnon was heavily influenced by his time spent in New York from 1955-1960. Two major touring retrospectives of his work were organized: Charles Gagnon / Works 1956-1978, Montreal Museum of Fine Arts in 1978 and Charles Gagnon: A Retrospective Musée d’art contemporain de Montréal in 2001. Charles Gagnon received the Chevalier, Ordre du Quebec in 1991 and the Governor General’s Award in Visual and Media Arts in 2002. He passed away in 2003.

Roy Heenan, O.C., Ad. E. (born 1935) is one of Canada’s most recognized authorities in labour, employment and administrative law. He was Founding Partner / Chairman (1973-2012) of Heenan Blaikie. A well known patron of the arts, Heenan sits on the board of directors of a number of public and private foundations and corporations. He was Chairman and Founding Director of the Pierre Elliott Trudeau Foundation (2002-2012), and since 2012 continues as a director and chairman emeritus. He sits on the Board of the Montreal Museum of Fine Arts since 2002 to the present, as well as on the Board of the Beaverbrook Art Gallery. He was on the Board of the Art Gallery of Ontario, Chairman of the Musée d’art contemporain de Montréal from 1994-1998, and Director of the CBC from 1995-2005. Appointed Officer to the Order of Canada in 1999, Heenan was also conferred the honourary title of Emeritus Lawyer in 2008 by the Quebec Bar and in the same year awarded an Honorary Doctor of Laws degree from McGill University.

Pierre Théberge, O.C. (born 1942) began his professional career as a curator at the National Gallery of Canada in 1966. After working as the Chief Curator and Director of the Montreal Museum of Fine Arts, he became the Director of the National Gallery of Canada 1998-2009. Théberge was appointed Knight of the Ordre national du Québec in 1992, and Officer of the Ordre des Arts et des Lettres by the French government in 1994. In 2001, Théberge was appointed Officer of the Order of Canada for his exceptional contribution to the visual arts in Canada.