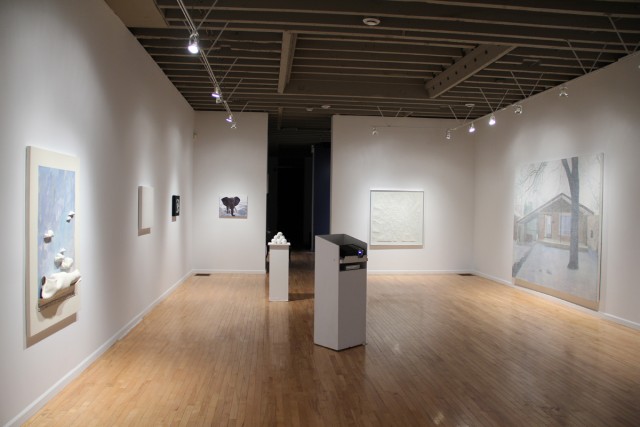 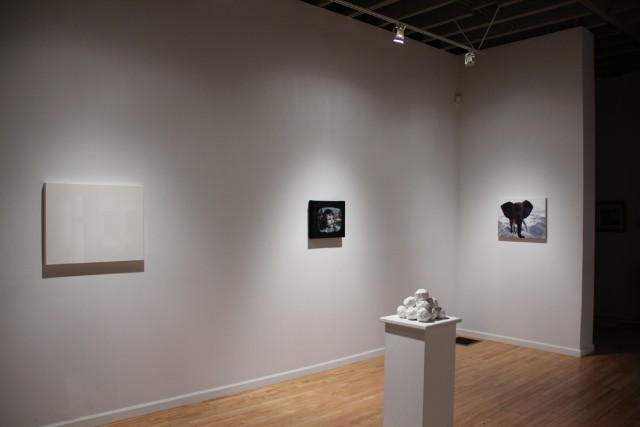 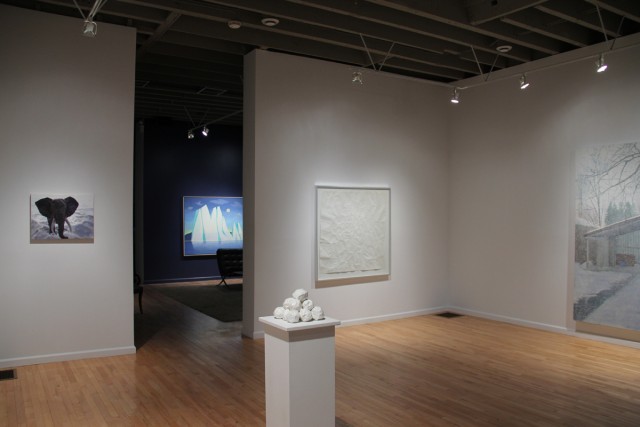 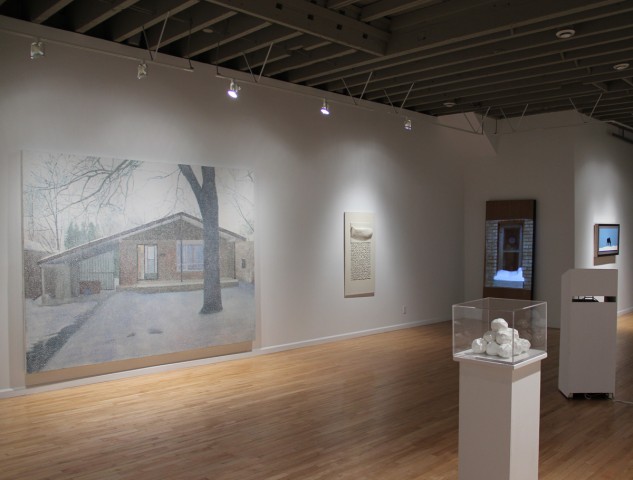 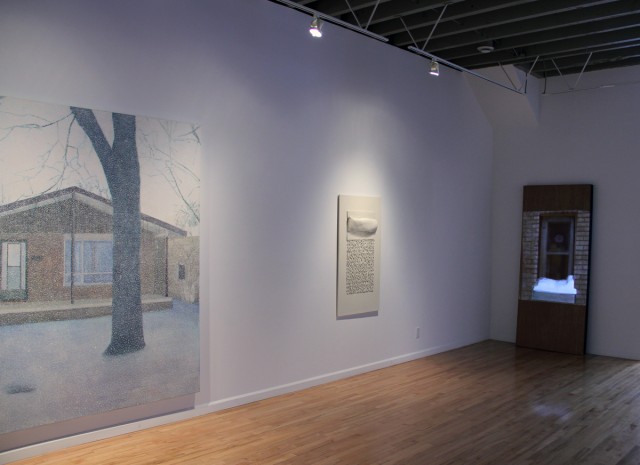 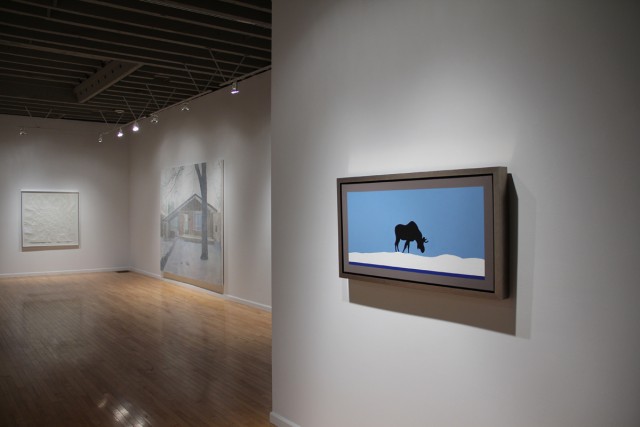 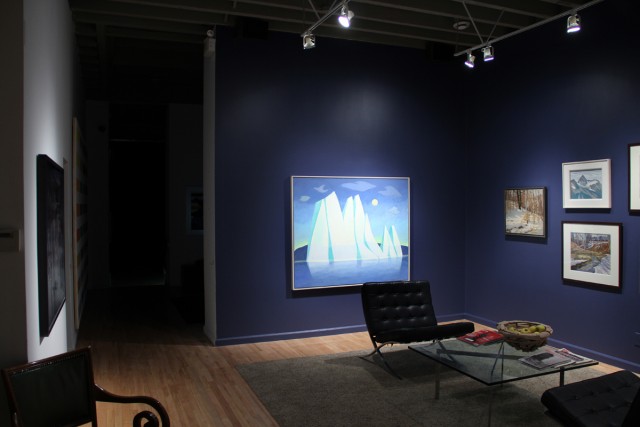 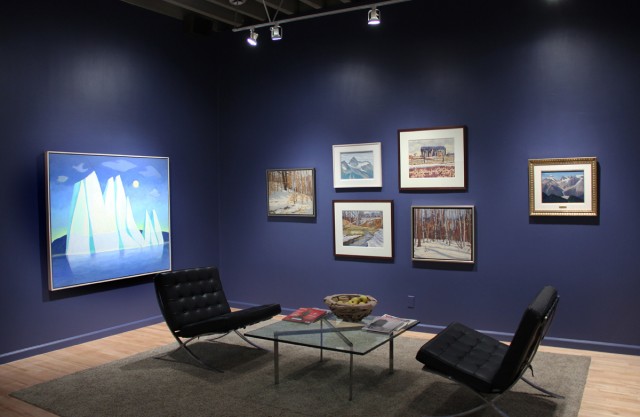 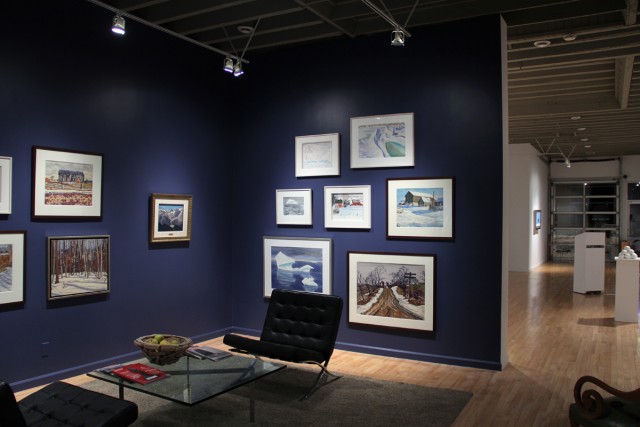 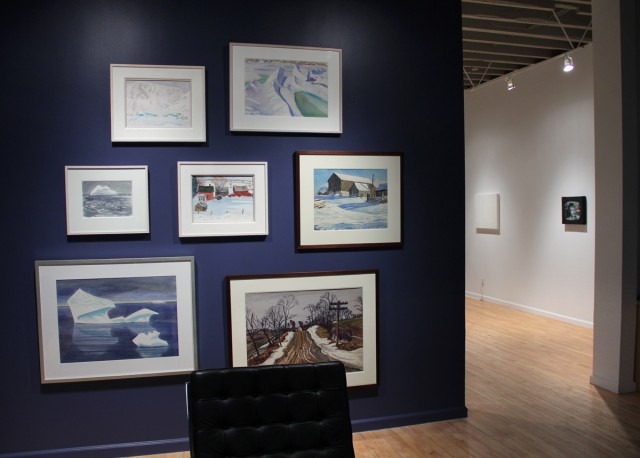 The snow show is not a Michael Snow show as many have suggested. This summer I acquired a painting where snow was the dominating force. As we put it on the rack for storage (as you can’t sell snow in July), it came to me I could curate a December show with snow, or the colour white, as the main theme.

I have sought out new connections to curate what I feel is a great overview of what we all love: snow in December. Snow in March, not so much. From Murray Favro’s projection sculpture to the mighty Lawren Harris mountains, this exhibition will blow a gust of acknowledgment that Canada and snow are forever synonymous.

Margot Ariss began working as a sculptor in the late 1950’s, stamping words into soft clay with a child’s set of wooden letters. Throughout the 1960s and 70s, she created intricate text-based clay wall panels, pots and cubes by scratching, stenciling or stamping personal poems or quotations into the clay. Margot was an avid reader and poet and often used quotations from Michael Ondaatje and John Bruce in her sculpture, illuminating the meaning of their poetry into elegant, visual, sculptural equivalents. Several of Ariss’s wall panels were inspired by the phenomenon of snow and often reference her childhood memory of writing poems in the snow.

Gathie Falk has defined her work as a “veneration of the ordinary,” the witty and whimsical treatment of the common objects of everyday life. In the 1960s and 1970s Falk made a series of “fruit piles,” brightly glazed ceramic pyramids representing the displays of apples, oranges and grapefruits that she saw at her local grocery store. Repetition and architectural forms are hallmarks for Falk. She recently re-visited the idea of the “pile”and has made for our Snow Show a papier mache sculpture of 14 snowballs: “Arsenal: 14 Snowballs”.

Murray Favro is widely regarded for his highly original exploration of invention, perception and cognition. Working in drawing, sculpture, performance and installation, Favro often incorporates slide and film projections, lighting effects, and computer and electronic technology. His work involves inquisitive play and studied observation. The “Window, Winter” projection in The Snow Show is a remarkable example of a Favro “projected reconstruction”, an image projected onto a three dimensional object whose surface has been modified to fit the distortions of the projected image.

Primarily a painter, Sky Glabush studied art at the University of Saskatchewan which led to a residency in the Netherlands and several subsequent years in Amsterdam, where he began to paint local architecture. He returned to Canada, where he received an MFA at the University of Alberta in Edmonton. He moved to London, ON in 2006 to take a teaching position at the University of Western Ontario. In his first few years in London he painted a suite of expansive canvases inspired by London’s backyards and postwar bungalows. “White Out” features one of the houses that Glabush walked by each day on his way to UWO.

Will Gorlitz explores the empathetic potential of painting and critically engages issues of representation, interpretation and presentation. His series of “animals in snow” is a continuation of his fascination with metaphorical subjects that reflect on nature, culture and technology. Gorlitz intentionally has chosen two juxtaposing subjects: exotic wild animals estranged in fields of white snow. Through the act of painting and intense observation Gorlitz examines a hypothetical near-future ice age and our human domination over natural order.

Natalka Husar’s paintings explore her Ukrainian heritage and her sense of identity within that heritage. Often following an interconnected narrative or theme, Husar’s paintings exude raw emotion. Her newest work incorporates pieces of abandoned needlepoint with exquisite painting. The youthful girl in First Snow exudes a feeling of hope amongst the sparkling snow and mountain grandeur. The painting, the dimensions of an old style TV, feels nostalgic, hand crafted and comforting.

The Snow Show features a rare 1924 painting of Emerald Lake by Lawren Harris. 1924 was the first year that Harris travelled with JEH MacDonald to the Emerald Lake area in BC. For Harris, the mountain spirit was the spirit of Canada. He believed strongly in the purity of the landscape and strove, through his paintings, to convey that spirit. Through the 1920s his work became less and less about the human world and more about reductive landscapes of the Rocky mountains and Arctic. In the mountains, he had a strong affinity with the clear air and simple sculptural mountain forms.

Simon Hughes was born in Winnipeg, Manitoba in 1973. He holds a BFA from the University of Manitoba (1996) and an MFA from the University of California (2010), in Irvine. His art practice encompasses painting, drawing, film and video. Since 2000, Hughes has worked almost exclusively on paper using watercolour, collage and other media. His “Northern” series of narrative works explore regionalism and common stereotypes of Canada’s north. Through his abstracts and quasi-architectural renderings, Hughes creates fantastical Canadian scenarios with a playful childlike attitude.

Wanda Koop is one of Canada’s most inventive and renowned artists. Her work explores the relationship between nature and technology and our human impact on nature or with technology. The painting “Interweave (White on White)” in The Snow Show was inspired by the pixilated images that Koop photographed on her distorted high-definition television. Koop “weaves” majestic bands of white paint across the canvas to give the impression of a representational field of snow, a screen gone blank or an abstract constructivist painting. The simplicity and complexity of the painting is classic Koop.

Doris McCarthy is best known for her depictions of the Canadian landscape and arctic icebergs. Inspired by Lawren Harris, McCarthy made her first trip to the Canadian Arctic in 1972. A deep love of the North is evident in her ‘Iceberg Fantasies’ series, considered to be among some of her best known and celebrated works. The Doris McCarthy paintings that we have selected for The Snow Show are reflective of Doris’s passion for depicting the “feel” of being in the Canadian landscape and exemplify her incredible talent as a painter.

Clark McDougall is well known for his depictions of rural towns and the landscapes of North Yarmouth Township. Often painting directly from nature, McDougall was an intense observer of light and colour. He had an inherent understanding of how to compose paintings and to convey the feeling of being in the landscape. In a few touches of paint McDougall communicates the colour of sun on snow, the smell of wet mud on a field and the freshness of a crisp winter wind.

For The Snow Show we are showing a rare 1973 water on paper painting by Ron Martin. The painting explores Martin’s ongoing investigation of the subjective nature of art and his exploration of the symbiotic relationship of water on paper. Even though the painting lacks colour and paint, Untitled #34 is an experiment in gesture, mark making and process – a consistent idea for Martin.

Over the arc of a distinguished career, Charles Pachter has developed an artistic practice that channels everyday Canadian icons—moose, hockey players, Mounties, and the Queen—into stylized pop images. While the exuberance, humour, and grand scale of Charles Pachter’s art has defied the stereotypes of humble and polite Canadians, the images that he has crafted, and in some cases reflected, promote a modern Canadian mythology for all.

Diana Thorneycroft’s wildly popular “Group of Seven Awkward Moments” series of photographs acknowledges and satirizes the mythology and icons of Canadian culture. Reproductions of paintings by Tom Thomson, Emily Carr and the Group of Seven are used as backdrops to dioramas that Thorneycroft constructs and then photographs. The plastic dolls and figurines act out the drama in the foreground, creating the awkward moment in the “mise en scene”. “Group of Seven Awkward Moments” was listed by Canadian Art Magazine as one of the best exhibitions of 2008. The exhibition has travelled across Canada from the McMichael Canadian Art Collection to the Winnipeg Art Gallery, Windsor Art Gallery, Carleton University Art Gallery, Reach Gallery Museum, Art Gallery of Algoma, Art Gallery of Sudbury and to the Canadian Cultural Centre in Paris.