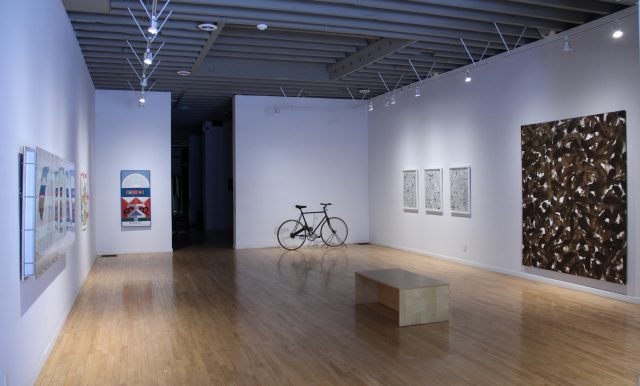 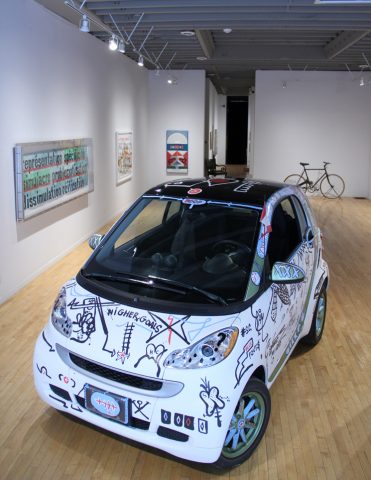 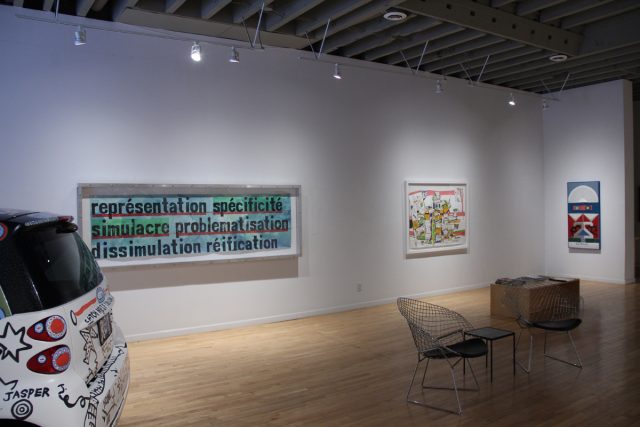 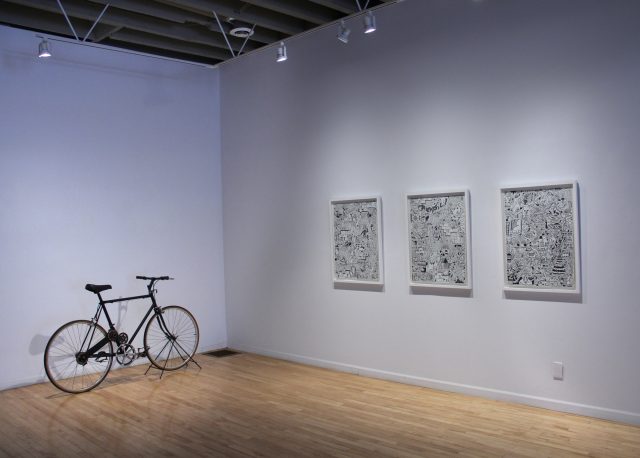 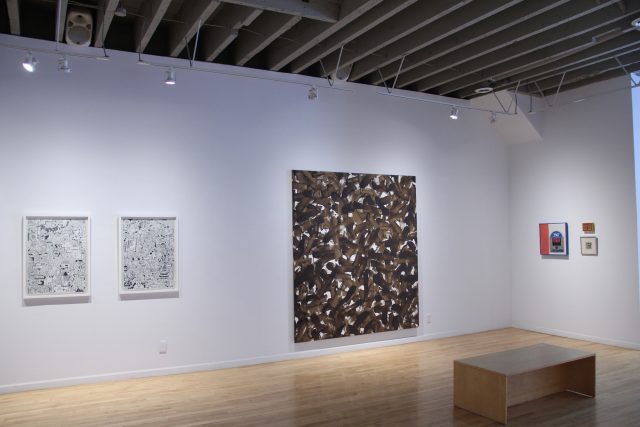 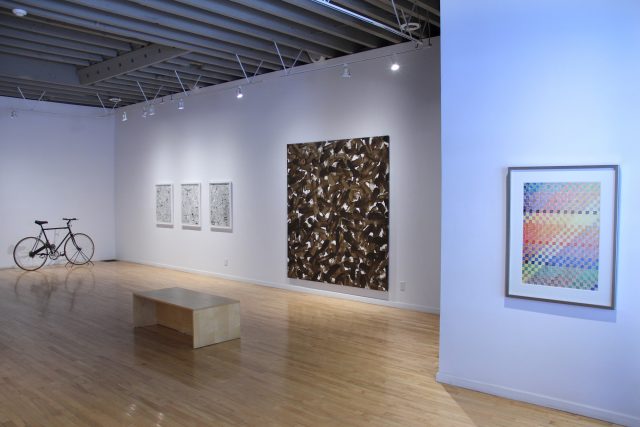 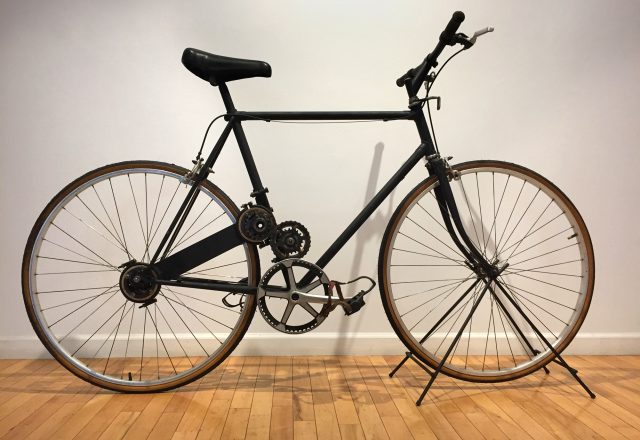 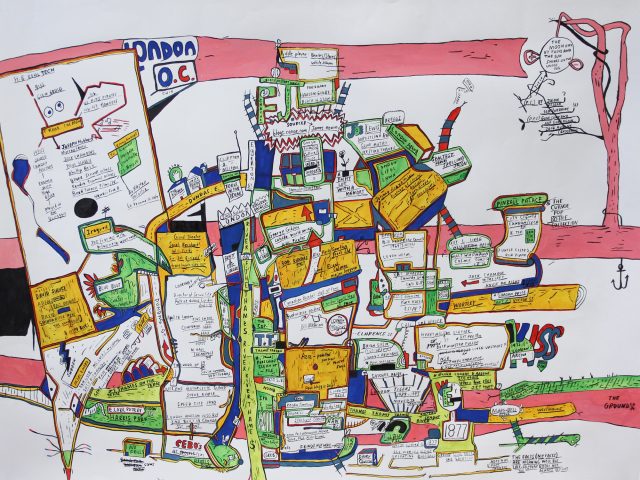 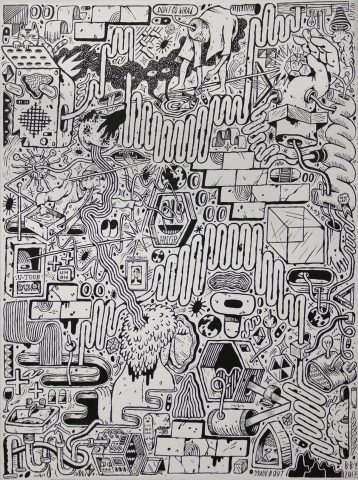 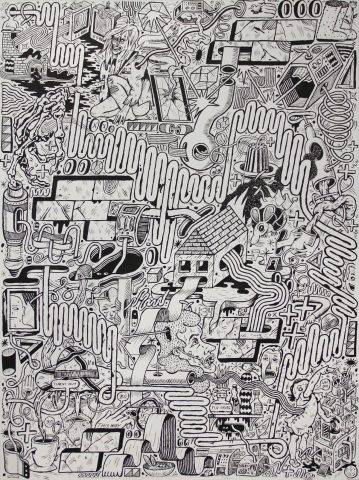 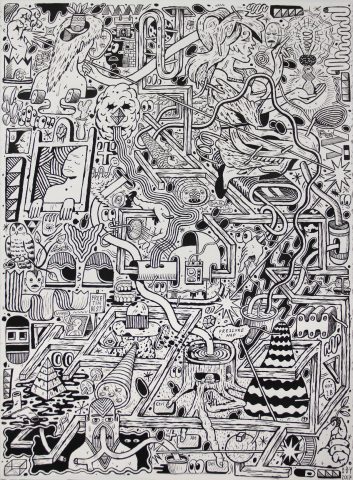 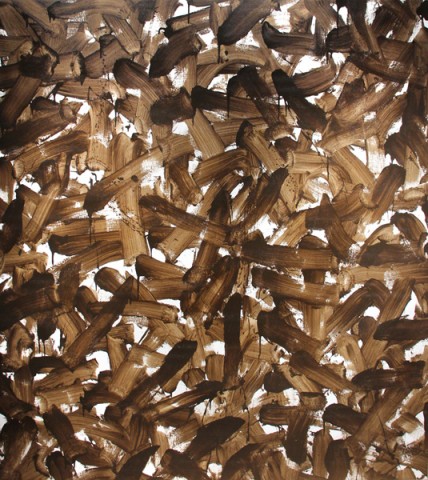 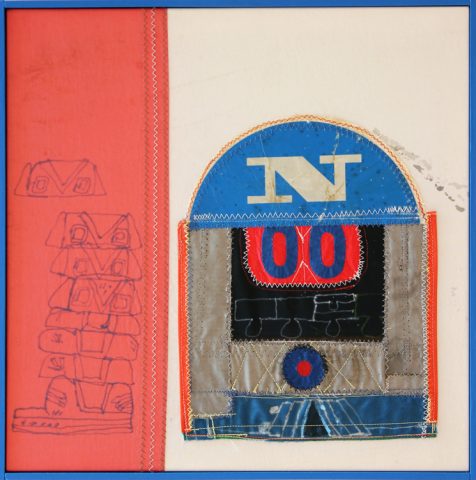 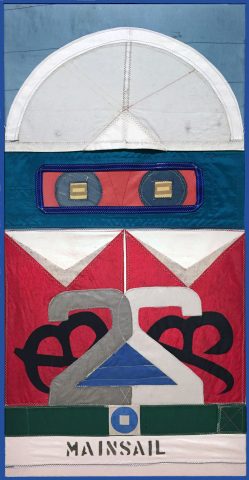 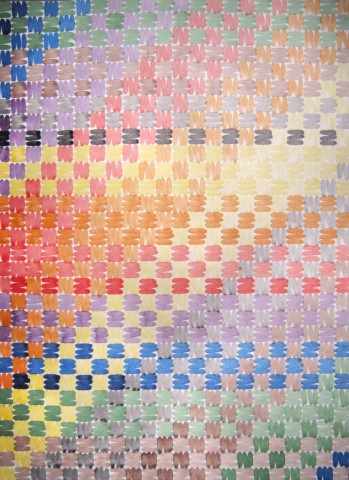 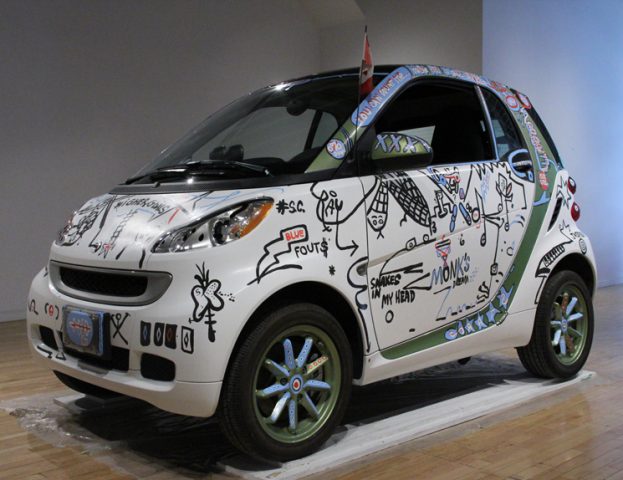 Our September exhibition includes Greg Curnoe, Murray Favro and Ron Martin paired with James Kirkpatrick, Jason McLean and Billy Bert Young.  All six artists came of age as artists in London, Ontario and studied at HB Beal.  Curnoe, Favro and Martin were part of the London Regionalist Canadian art movement that developed in the 1960s.  Kirkpatrick, McLean and Young, emerged as artists directly influenced by Regionalism.  Through this exhibition we celebrate the diverse artistic output from these artists and highlight direct influences.

We are exhibiting a new hand-made chain-less bicycle by Murray Favro, Ron Martin’s important 1972 “Early One Colour Painting” and a 1990 stamp-pad-ink work by Greg Curnoe that contemplates contemporary art criticism.

Murray Favro was born in Huntsville, ON in 1940.  He moved to London as a teenager where he studied art at H. B. Beal Technical and Commercial High School. With Jack Chambers, Greg Curnoe, Ron Martin and others, Favro was part of the generation of London artists who became nationally recognized in the 1960s. He is also well known as a founding member of the Nihilist Spasm Band, which was crucial to the development of his artistic approach.

Around 1965 he abandoned painting for other-than-art interests – guitars, machines, airplanes, experiments with film images and inventions. A Canada Council Arts Bursary in 1970 allowed him to devote himself to his art. That year he developed his first successful “projected reconstruction,” in which images on a slide are projected onto their wooden, white, life-sized counterparts, giving them colour, detail and identity. He later produced modified inventions (Windmill Electric Generator, 1975-76; Perpetual Motion Machine, 1976-77), evolved inventions (Propeller Engine, 1978), and material, 3-dimensional renderings of airplanes (Sabre Jet, 55% Size, 1979-83).

Known for his multi-disciplinary practice, Favro’s artwork has been the subject of a major retrospective organized by the Art Gallery of Ontario in 1983 and in 1998 at the London Regional Art & Historical Museum. Murray Favro received the Gerhson Iskowitz Award in 1997 and the Governor General’s Award in Visual and Media Arts in 2007.

James Kirkpatrick, born in London, ON in 1977, attended H.B. Beal Secondary School and received his BFA from the Nova Scotia College of Art and Design in 2002. He has exhibited his work extensively throughout the US and Canada including shows in new York, Boston, Los Angeles, San Francisco, Miami, Halifax, Toronto and Vancouver. In 2009 Kirkpatrick was featured in the group show Pulp Fiction, which traveled from Museum London to the MOCCA in Toronto and St. Mary’s University Art Gallery in Halifax. Kirkpatrick was included in the successful Not Bad For London group exhibition at the Michael Gibson Gallery and L.O. Today at Museum London. In 2014 the McIntosh Gallery at Western University mounted a solo exhibition of James Kirkpatrick’s paintings, drawings, video, sound sculpture and installation work. Also known for his participation in the early Canadian graffiti movement and as avant-garde hip-hop artist Thesis Sahib, Kirkpatrick works in a variety of media including drawing, painting, sculpture, zines, mask-making and experimental sound improvisation.

Billy Bert Young was born in London, Ontario in 1983. He graduated from H. B. Beal Secondary School in 2003, where he was introduced to the drawings and zines of Marc Bell and Peter Thompson and the graffiti work of James Kirkpatrick’s (AKA Thesis Sahib). In 2004 he moved to Halifax, Nova Scotia where he graduated with a BFA from the Nova Scotia College of Art and Design with a major in printmaking.  During his time in Halifax he exhibited work in several group and solo shows. In 2008 he moved back to London to be close to family and to work with local artists that had influenced his work in the past. Since then he has made collaboration a main component of his practice; creating zines, drawings and murals alongside fellow artists such as James Kirkpatrick and Jason McLean.