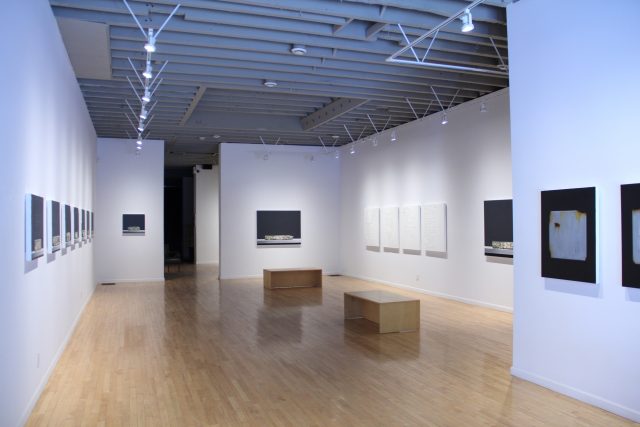 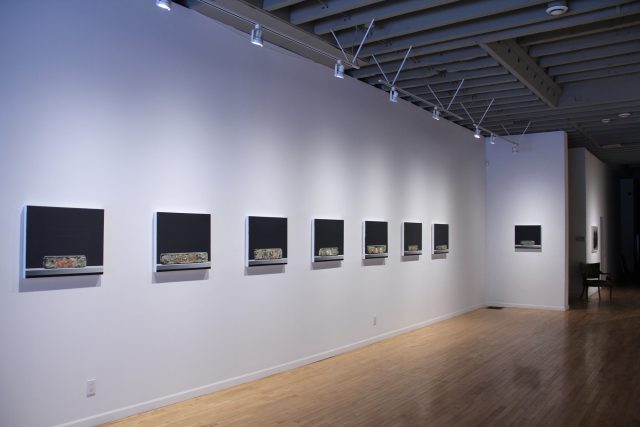 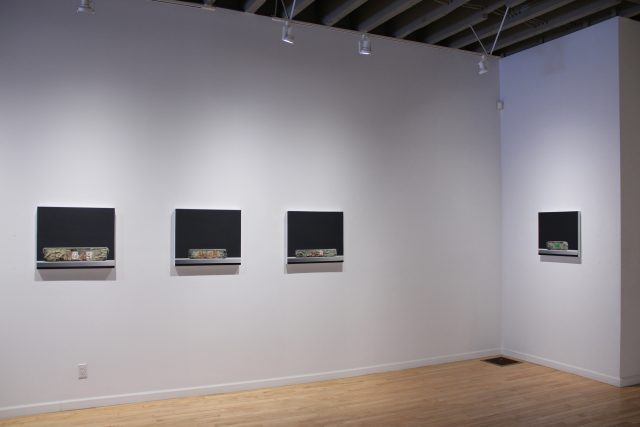 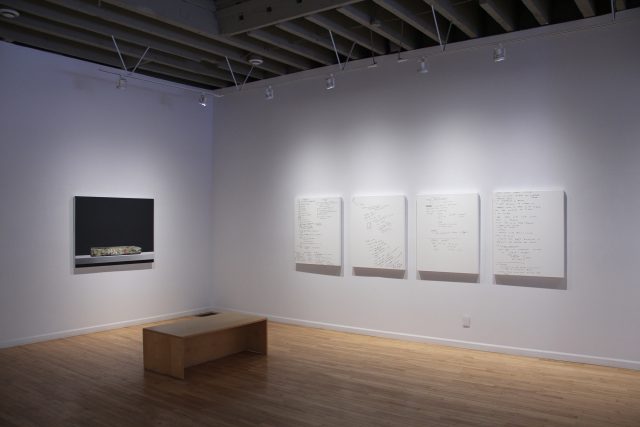 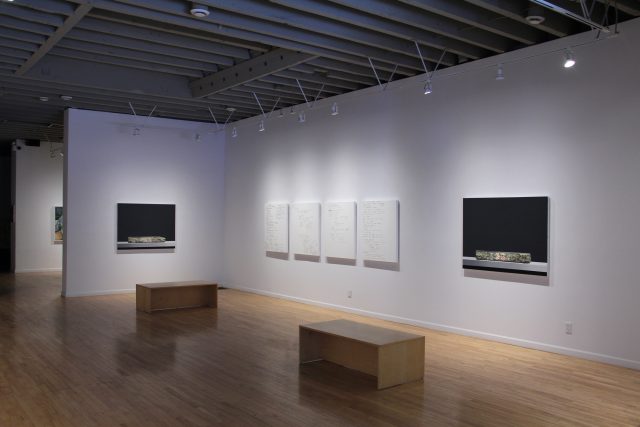 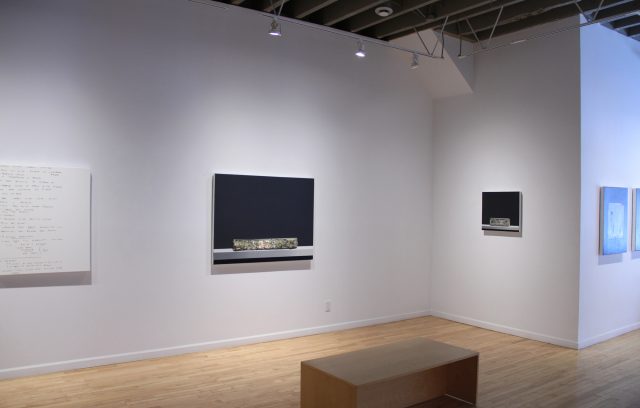 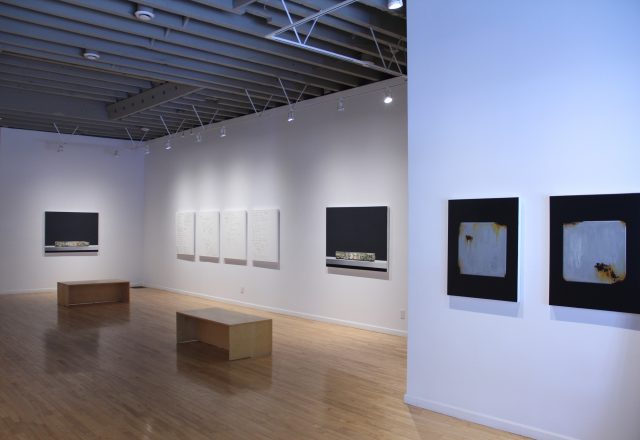 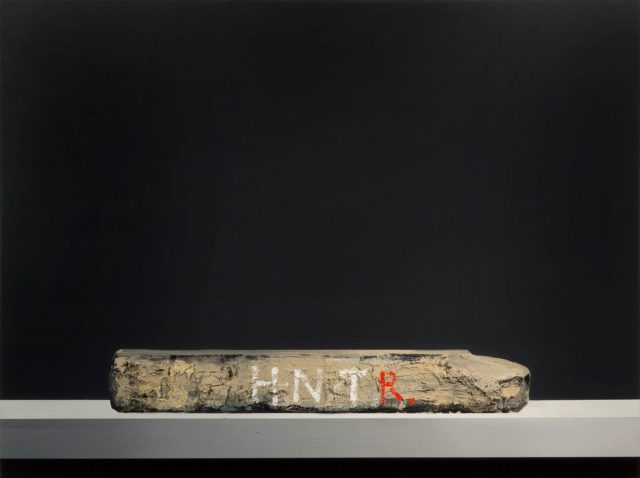 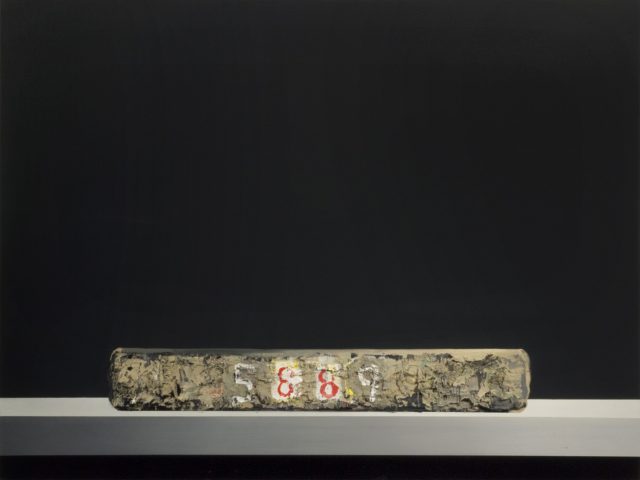 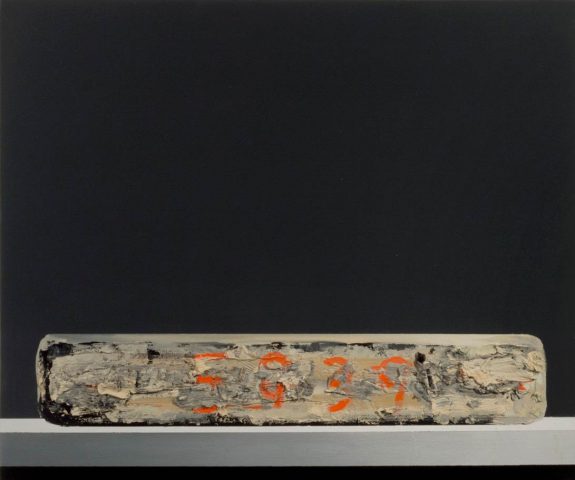 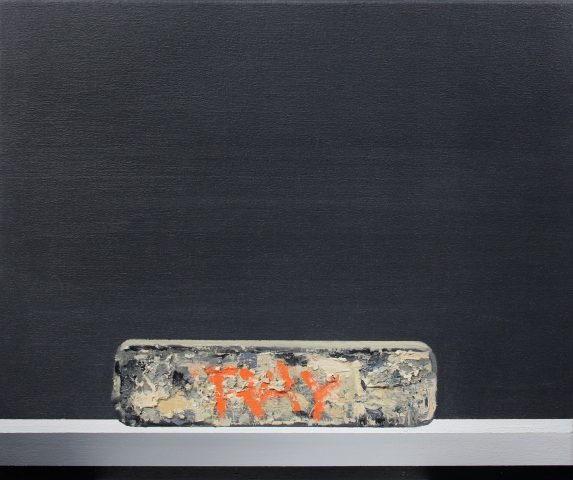 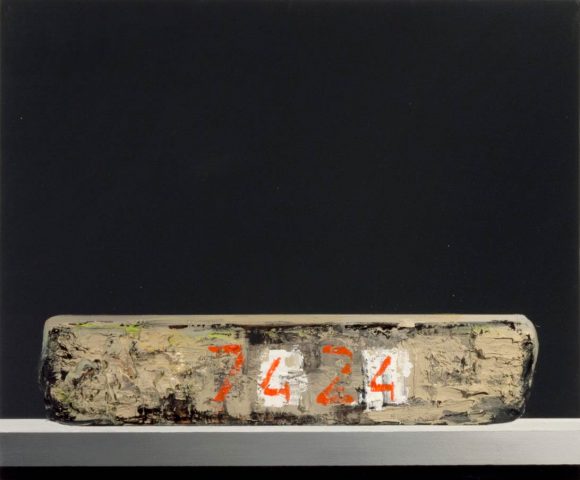 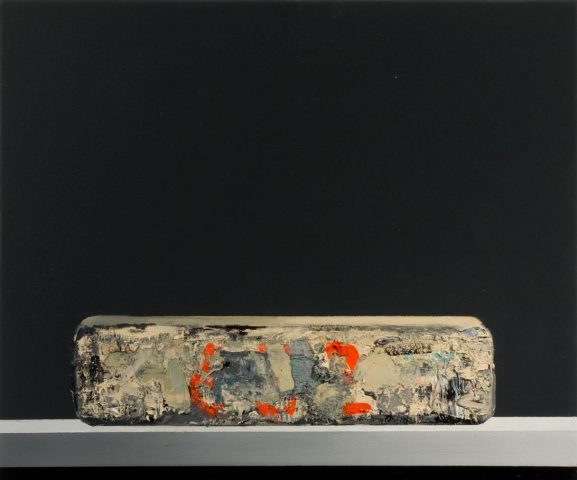 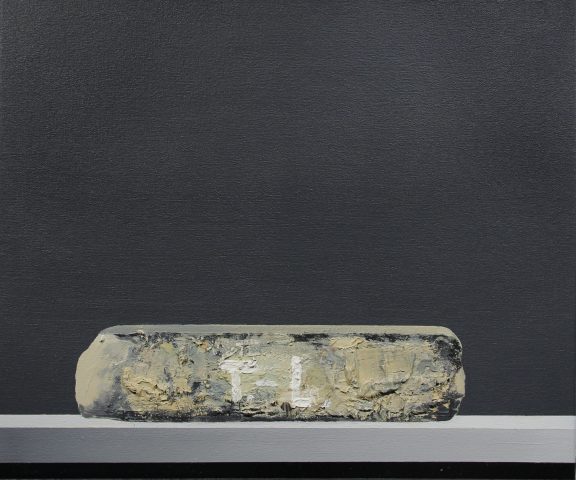 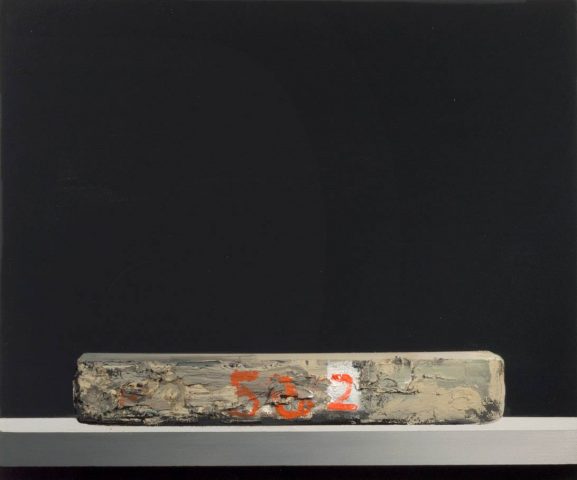 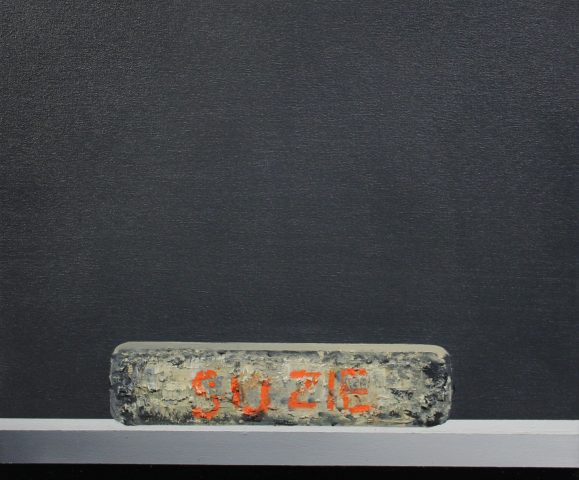 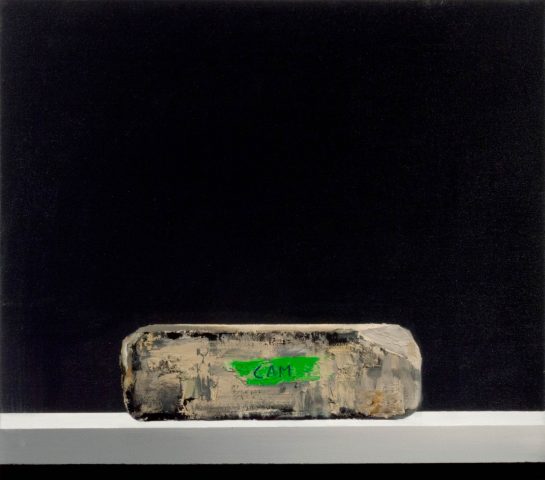 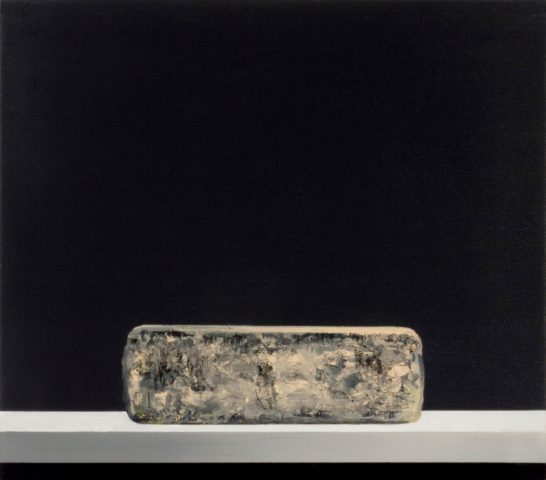 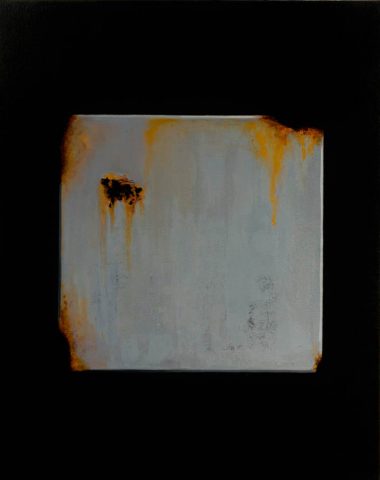 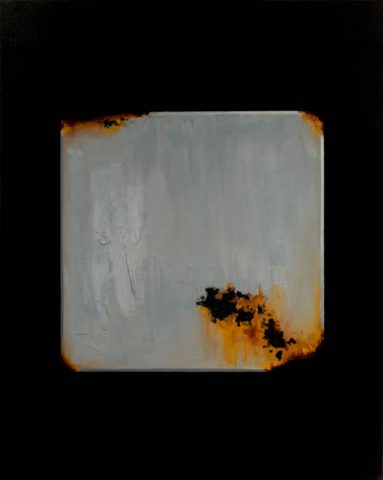 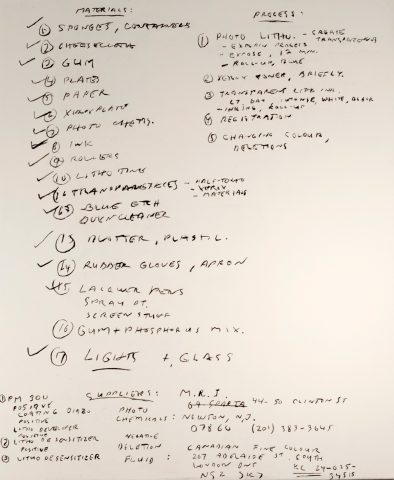 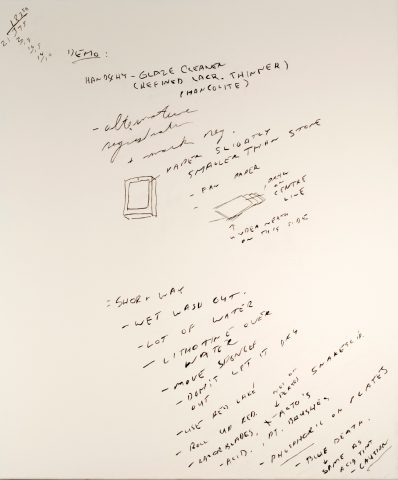 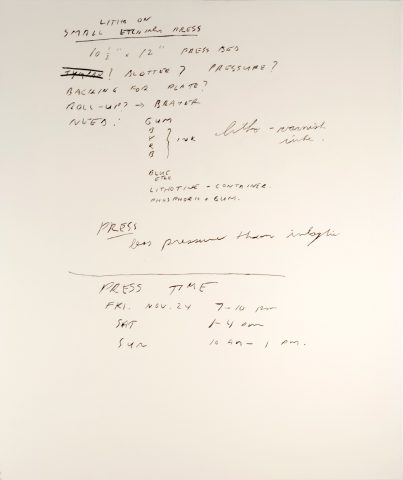 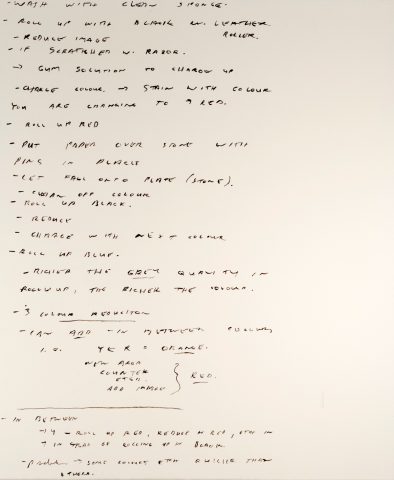 The Lithography Stones are inspired by an old lithography manual that Ufuk received from his father-in-law.  He has collected images of stones, paying particular attention to their thickness, weight, size and label.  The stones in the paintings are not from direct observation or copied from the manual, rather are constructed by the artist from his careful study of the object.  The names and numbers on the stones are either personal dedications to people Ufuk knows or actual inventory identification numbers.

The Plates are metal etching plates. Similar to the stones, they are not from direct observation. Ufuk is interested in the history of the square as a motif and has chosen the metal etching plate to explore this minimalism. He has reinvigorated the square and made it look new. The plates feel slightly different than the stones as they are placed on a glistening black ground.

The Lithography Notes are hand-painted reproductions of process notes of Ufuk’s father-in-law, which he found abandoned in an old lithography manual.  “I was interested in using subject matter as an obvious connection between works that look very different from one another, and in subverting the idea of mechanical and chemical reproduction—trying my best to copy his handwriting, the process felt similar to speaking a foreign language with one’s own accent. As a body of work, these paintings are about the unrealized potential of brand-new, inviting surface, the patina of steady use, and the threat of obsolescence. They also engage with methods of artistic reproduction and mimetic strategies in painting and in lithography.”

“My most recent series of works deals with the medium of stone lithography as subject matter and motif. Invented by German playwright Alois Senefelder in the late 18th century, this technique initially provided a low-cost alternative to etching for reproducing plays, musical scores, and other written publications. Followings its decline as an industrially and economically viable process in the mid-20th century, the use of these stones has now been relegated to art schools and printmaking centres, where a steadily diminishing audience can engage in the endgame of a medium. Found in only one small and near-exhausted quarry in Germany, these stones have now become rare and very hard to procure: each new motif demands that the stone is ground, polished, and partially pulverized; each new image thus brings the stone closer to its breaking point.

There is a poignancy in this imminent obsolescence. I work primarily in painting, a medium which is frequently declared dead or dying, but which in fact has no substantial material threat to its continuation. Painting is the business of illusions and make-believe: in the studio, I can build up my stones over and over again on pieces of canvas, rather than carving them out of a Bavarian quarry, and the supply in my studio can be replenished whenever I choose. My studio is filling up with these images of lithographic stones: each with a particular thickness, weight, and size; each identified by a name, number or label. The stones take on personalities, importing some of the communal spirit of a print shop into my otherwise solitary production space. Some of the stones are dedicated to people I know and like (using first names or initials), while in others, identifying numbers are copied from actual stones.”

Ufuk Gueray (b. Herrenberg, Germany in 1979) has lived in Germany, Canada and Scotland. He holds a BFA in Studio Art and French Studies from Concordia University, and an MFA in Fine Art from the Glasgow School of Art. He has been working as an instructor at the University of Manitoba School of Art since 2013. In 2014, he received an Honourable Mention in the RBC Canadian Painting Competition.

His work has been featured in exhibitions in Canada and the UK, as well as in national publications including Border Crossings, Art Windsor, and the Winnipeg Free Press.

Ufuk Gueray would like to thank the Winnipeg Arts Council, the Manitoba Arts Council and the Canada Council for the Arts for their support.