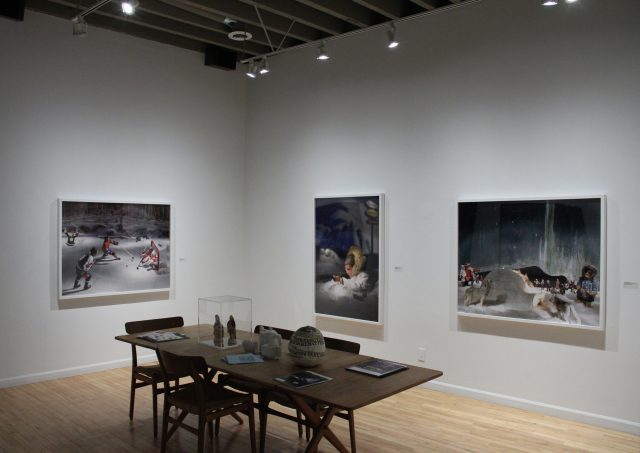 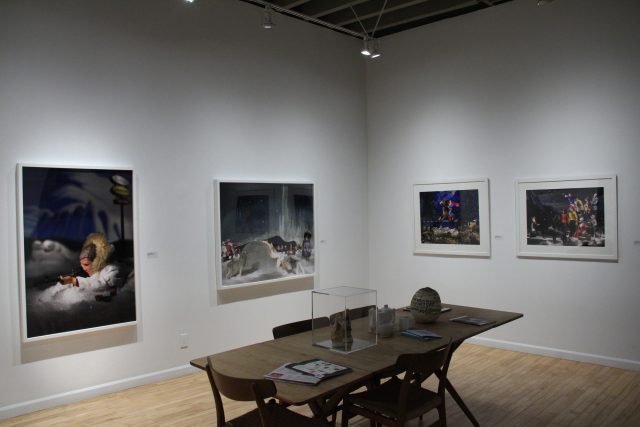 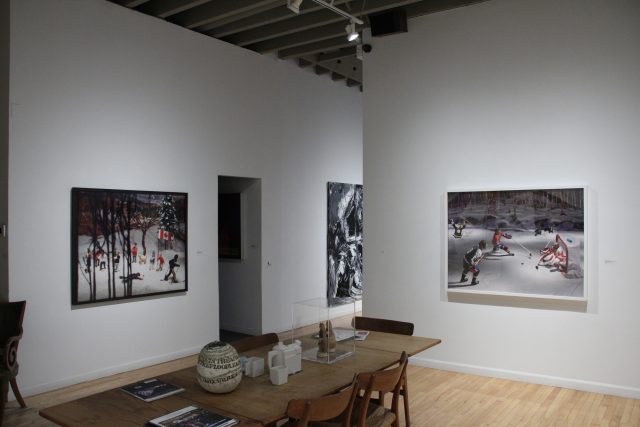 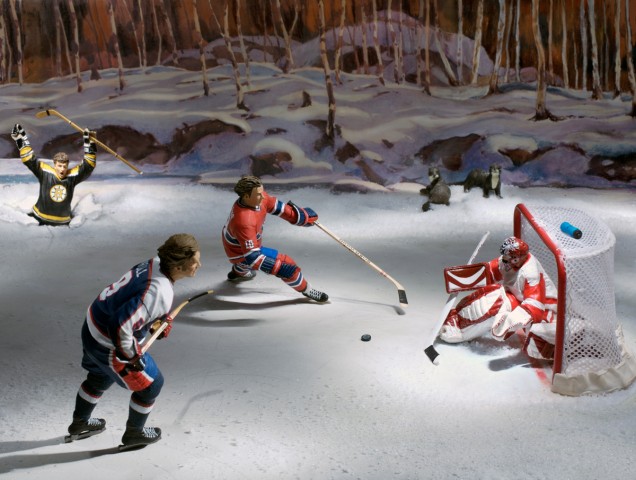 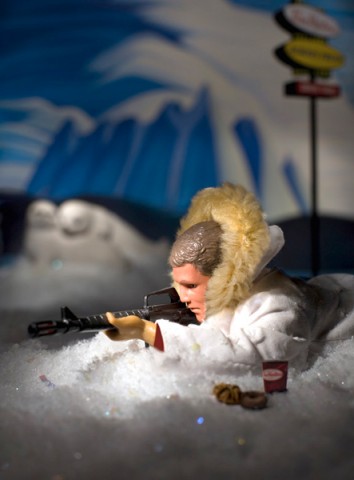 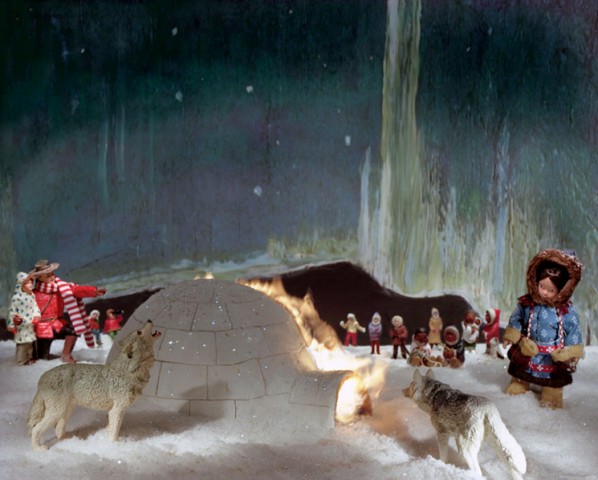 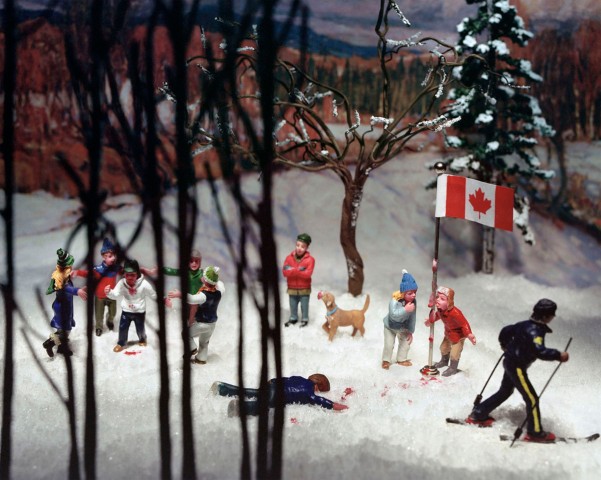 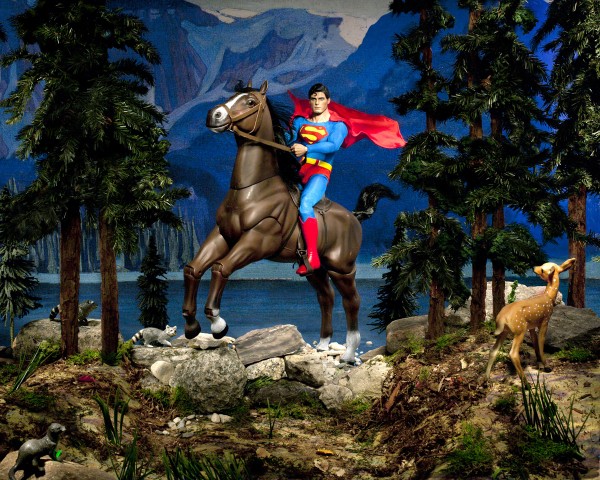 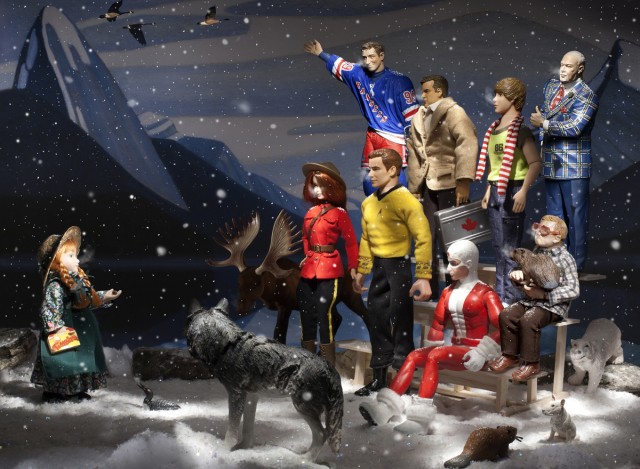 In our middle gallery for the month of February we have hung a series of Diana Thorneycroft’s popular “Group of Seven Awkward Moments” photographs.   Each photograph explores a different human “awkward moment” set within a Canadian winter.

Diana Thorneycroft uses the gaze of the camera lens to capture “awkward moments” of accidents, injuries, disasters, bad behaviour, and terrible predicaments.  As she sets out to construct her imaginary scenes composed of toys, dolls, and figurines representing real people and fictional characters engaged in the mundane activities of life, she could not foresee where it would lead.  It began with humour – a satirical comedy of things typically Canadian; but after the laughter subsides, several important issues come to the surface that are of no laughing matter.  Suddenly the darker side of human nature reveals itself: social indifference, acts of violence, primal subconscious wishes, repressed dreams, and nightmares.

This less-than-perfect picture of the Canadian nation is exemplified by the actions and attitudes of its people is juxtaposed with reproductions of the Romanticized landscape paintings of the Group of Seven and two artists with whom they have been closely associated, Tom Thomson and Emily Carr that have come to symbolize the Canadian myth in which we mostly believe.  The heroic appeal of the paintings contrasts and yet blends with the kitsch objects of the child-like dioramas in the foreground.  The paintings strangely envelope these staged tableaux, and find a new expression within the context of Thorneycroft’s surreal creations.  “Group of Seven Awkward Moments” are images full of contradictions and complex ambiguity that mimic the absurdity of the human or national condition.  Amidst all the chaos, one question remains: who are we really?

Thorneycroft examines our apathetic nature in “Winter on the Don”.  As a group of famous hockey players engages in an informal game, one of their own, the legendary Bobby Orr falls through the ice, an unfortunate and deadly hazard of Canadian outdoor winter sports.  His life is in danger but none of his fellow players stop to help him out of the water.

The RCMP officer is identified by his uniform.  While pointing to an igloo that has caught on fire, he does not seem to be concerned about the fire spreading.  He relates to the scene in front of him as a bystander unaffected by the danger that the fire poses to the people in its vicinity.

A man is lying in the snow in a region far north in the Arctic as indicated by the seals and reproduction of Lawren S. Harris’ “Lake and Mountains”, 1927.  The man is pointing a firearm at someone we cannot see.  We do not know if the man is a sniper, a seal hunter or part of an environmental or animal protection organization because we cannot see his target and cannot be certain of his identity.  Under normal circumstances, the sight of someone holding and aiming a deadly weapon so intently would be taken very seriously causing psychological anxiety.  But Thorneycroft inserts an element of surprise that undermines the severe tone of the image.  She places a Tim Hortons coffee cup and donuts in the foreground which normally we would not see in the Arctic tundra, certainly not a totemic sign of the conglomerate which stands prominently in the background.  The kitsch-like feel of the Tim Hortons cup and signage diminishes the scene’s intended effect, and diverts attention from the weapon to Tim Hortons as if mocking the entire scene.

With “In the Algonquin Park”, Thorneycroft deconstructs the myth behind of of Canada’s most distinguished institutions, the RCMP.  On skis, he is fleeing a tragic scene where a number of children are hurting after having torn their tongues on a metal flag pole.