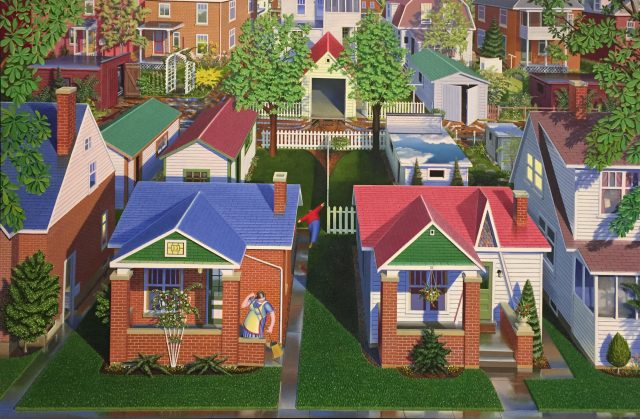 Brian Jones has not had a public gallery solo exhibition since 1989.  The survey exhibition “Brian Jones: The Sun Shines in All Yards” opens at Museum London on Sunday, February 5 at 1pm.

A native of Chatham, Ontario, Jones moved to London to enroll in the ground-breaking studio program offered by H.B. Beal Secondary School, and his works have been collected in the region since his emergence as an artist in the early 1970s. Jones relocated to Toronto in the early 1980s, where he gained a devoted and growing audience. He continued to live and work there, and in Collingwood, Ontario, until his untimely death in 2008.

Jones’ practice encompasses early figurative works and landscapes inspired by the look of family photographs and youthful memories; investigations of dramatic light and shape; and a long-running, lyrical ode to suburban North American family life. Over the course of his career, Jones developed two concurrent styles for which he garnered acclaim: one highly realistic, and the other eccentric and unique. The latter came to be known as his Neighbours series, sampling the title of a 1973 painting of homeowners looking out from hedge-divided yards. In these paintings, his subjects go about their daily business: tending their lawns, walking their dogs, spending leisure time with their families, rushing to and from work. By depicting individuals in flamboyant, stylized poses, sculpturesque, often symmetrical forms and vivid colour, Jones made each narrative a celebration of everyday verve and plenty. At first glance apolitical, the pieces are emotionally layered, expressing shared dreams and uncertainties.

The exhibition features works drawn from the collections of Museum London and the McIntosh Gallery, as well as private loans from collectors in London, Toronto, and beyond. A publication accompanying the exhibition will follow in the spring.