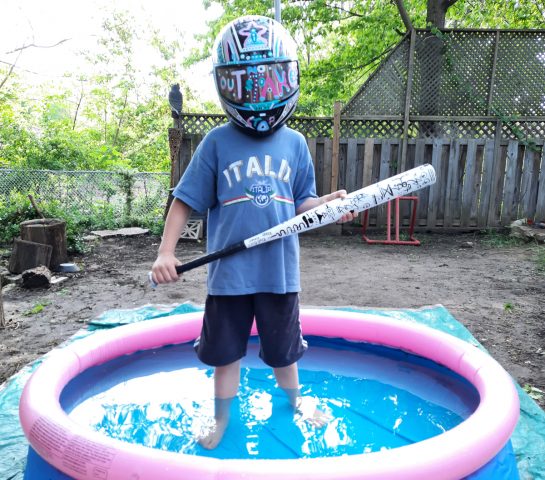 “Dad Club”, a two-person exhibit with Jason McLean and Ross Bell opens at Gallery Stratford on Saturday, June 4 from 1-4pm.

When it comes to artists working together, the least obvious pairings can sometimes produce the most interesting results – think Andy Warhol and Jean-Michel Basquiat. Such partnerships are about solo artists breaking away from long-held approaches to artmaking and embracing collaboration.

Such was Jason McLean’s motivation for inviting Ross Bell to participate in this exhibition, the working title of which, at the time of writing, was “Dad Art”. (Both artists are fathers.) For more than 25 years, McLean has produced paintings, drawings, collage, zines and objects of a decidedly funky, free-form and maximalist nature, the imagery rooted in pop culture, history, lived experiences and unconscious memory. He cites Art Green, a founding member of Chicago’s fantastical Hairy Who collective as an inspiration. Bell, on the other hand, is known for large-scale hard-edged sculptures that take a reductionist approach to form. He has an appreciation for Minimalists like Carl Andre. How can two artists, whose aesthetics seem poles apart, come together?

“Quite simply, Ross has abilities that I don’t have,” explains McLean. “I can’t build things like he does, so he is making the structures on which I will paint and draw. Working with Ross has been like having a handyman for a partner, someone who knows how to fix anything.” For example, Bell is building an arcade game structure in which McLean will show animations. He is also refurbishing a vintage radio cabinet to house McLean’s “Cough Park” project. Inspired by poet John Giorno’s “Dial-a-Poem” work, people are invited to call a number and leave a message about anything – a joke, a song, a poem, a recollection, a dream. To date, “Cough Park” includes recordings left by everyone from Elton John to the artist’s parents.

For Bell, the exhibition presented an opportunity to put aside his usual studio-based rules about art making. “My work is about paring back, but Jason’s isn’t about that,” he says. “I can’t wait to see how the structures I’m building are transformed by Jason painting on them. I’m also an artist who gets all the work for a show finished well in advance, but the pandemic forced us to think differently about making work together.”

An object sure to be an audience favourite is called the “Stratfordcaster”, a guitar constructed by Bell – inspired by the guitars of London, Ontario-based sculptor Murray Favro – on which McLean will likely map out Stratford’s musical legacies. According to McLean – whose practice involves researching the pop culture and social histories of where he’s exhibiting – some musicians in the legendary rock group The Band and Janis Joplin’s Full-Tilt Boogie Band have ties to the Stratford area. McLean’s “detective work” is integral to an artwork’s production, and viewers must use their own sleuthing skills to uncover the associations between the fragments of text and images. In fact, both artists’ practices require viewers to take their time: in McLean’s case to discern the thread that winds through a painting or drawing, in Bell’s case to recognize the beauty in his structures’ material qualities.

“In the end, people will interact with and interpret the objects based on their own experiences and knowledge,” says Bell. And, perhaps, viewers will also leave the exhibition feeling as if they’ve just emerged from a dream.