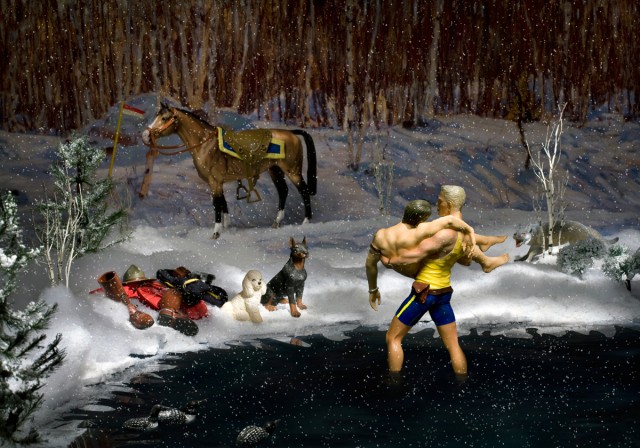 Diana Thorneycroft was recently interviewed by Talking Pictures, a magazine that interviews photographers from around the world.

Alasdair Foster writes: Canada is a place with two distinct identities. One is the urban and urbane multicultural nation, friend to all, an ethnic mosaic to the north of its more powerful sibling, the United States. The other is a vast territory of ancient indigenous peoples, timeless landscapes and dark forgotten histories.

The human mind is also the theatre of two distinct identities. One is the sense of the external self: the pilot of our corporeal and sensual experiences as we negotiate our place in the world and our relationship with others. But there is also an interior self, wholly and privately the domain of the individual, a place of imagination which, while it colours our sensibility, may not always be revealed to our consciousness.

Diana Thorneycroft explores these two zones of uncertain compromise; in particular the things we know but try to forget. An artist with a hybrid background, her photographic works are, like drawings or paintings, constructed rather than simply excised from ‘reality’. Some involve the artist herself as a living, breathing actor or everywoman caught in a kind of performance of the psychological self. In this way she seeks to use the camera, a machine inextricably tied to the exterior world of objective reality, to explore the interior realm of subjective perception.

Her later works use dolls, which stand not only for people as individuals but also as iconic depictions of abstract qualities such as heroism or vulnerability. These plastic figures are placed within dioramas that evoke the clichéd images of Canada familiar through fine art and popular culture. Echoing the multiculturalism of Canada, her dolls are drawn from a diverse catalogue of modern myth and make-believe. The stories they tell suggest that, beneath the verdant landscapes of Canadian national mythology, there lies a murkier subsoil of anxiety and incongruity.

Combining humour with social critique; history with psychology, Diana Thorneycroft has gained a significant reputation as, in the words of the writer and art critic Robert Enright, “one of the most exciting photographers working in North America”.