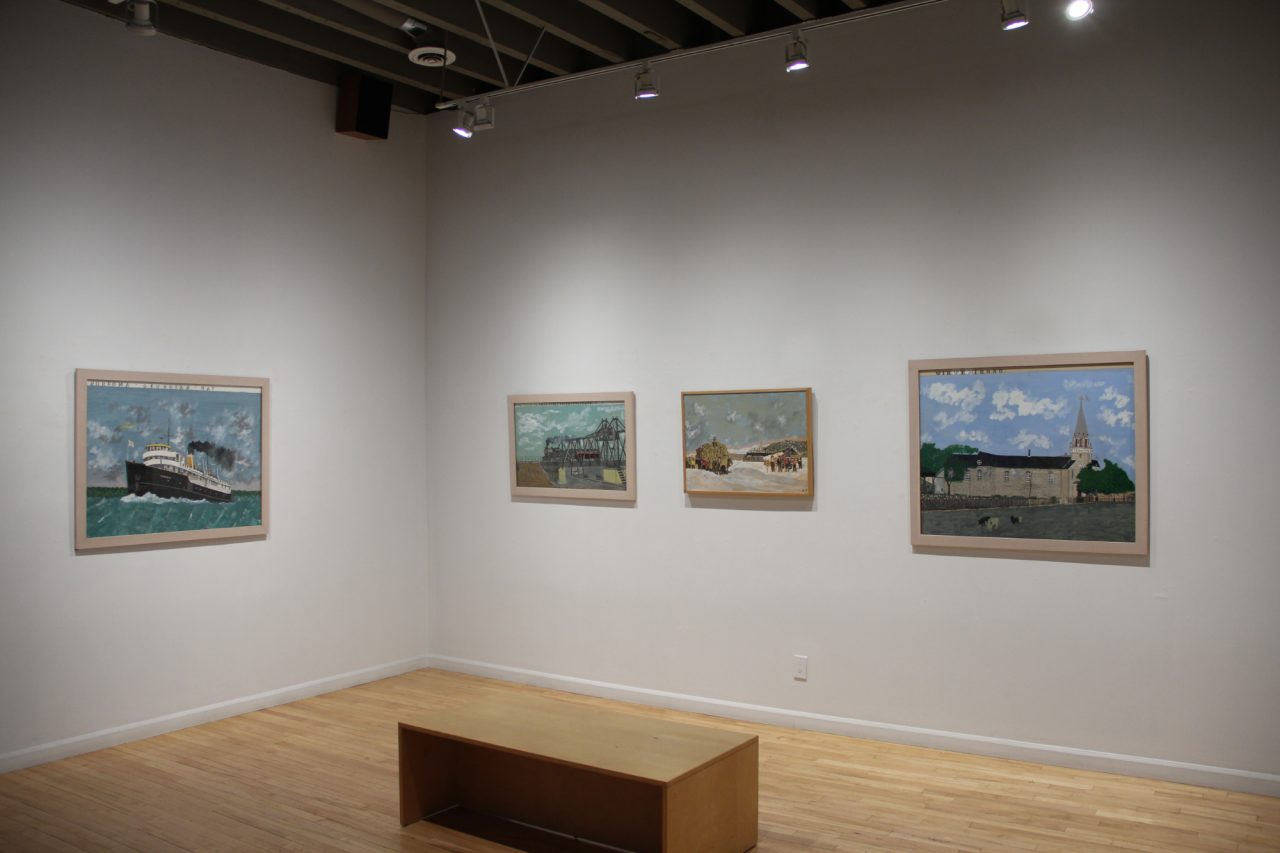 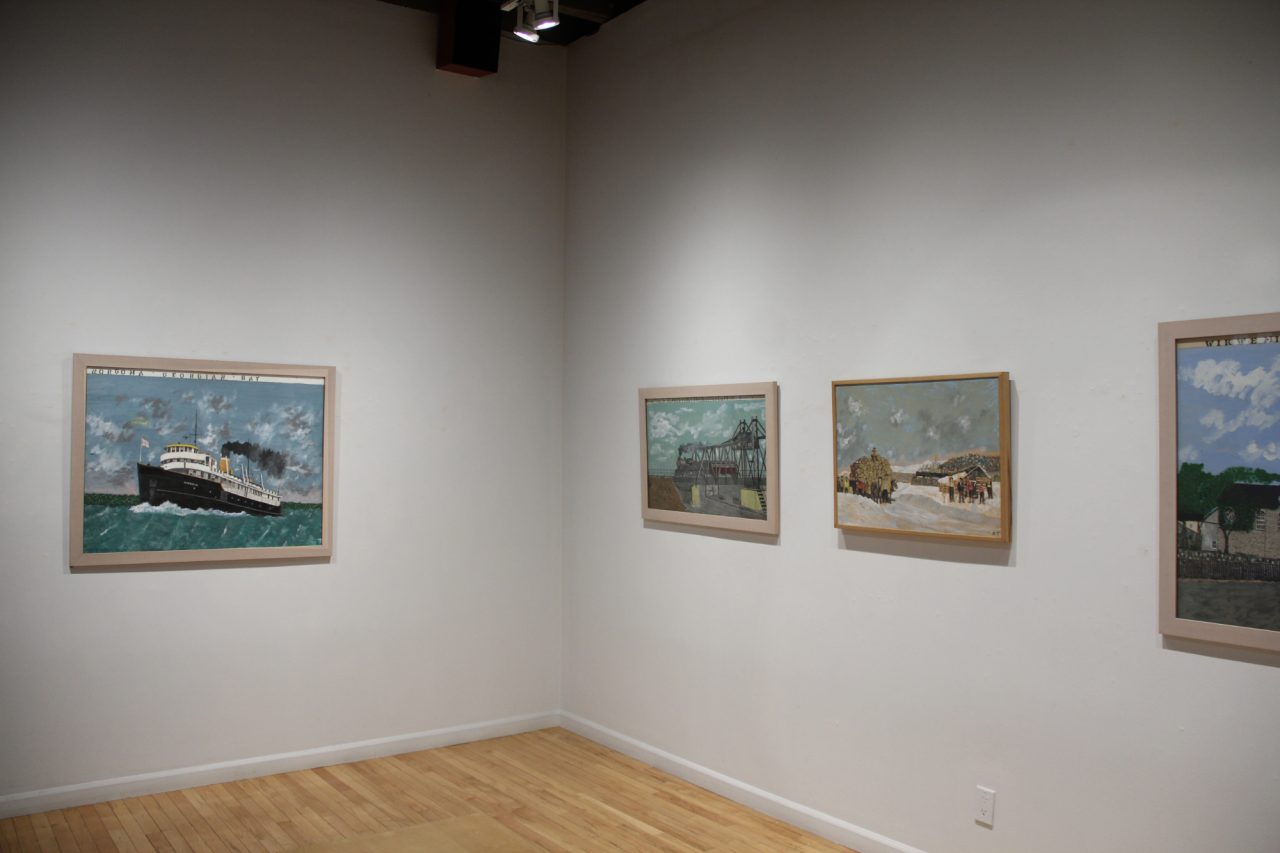 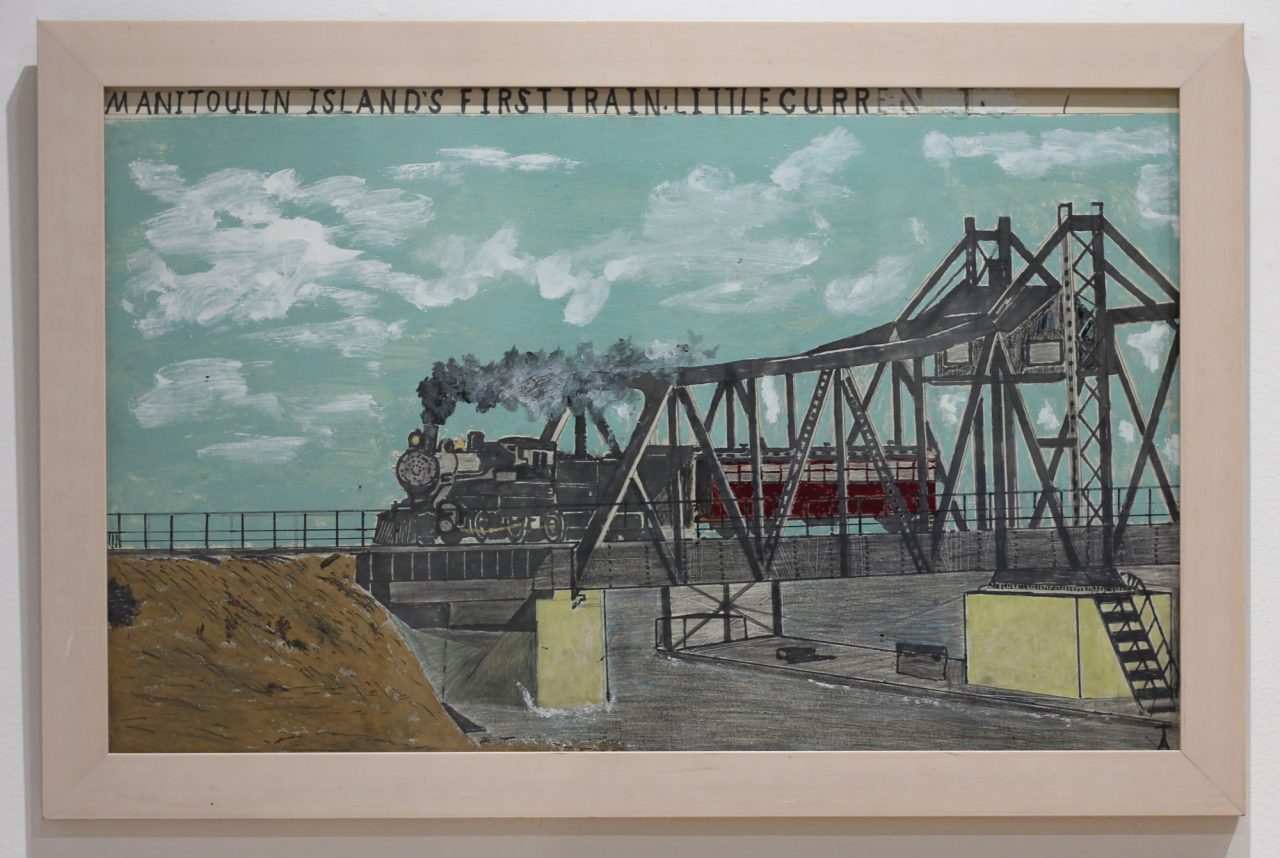 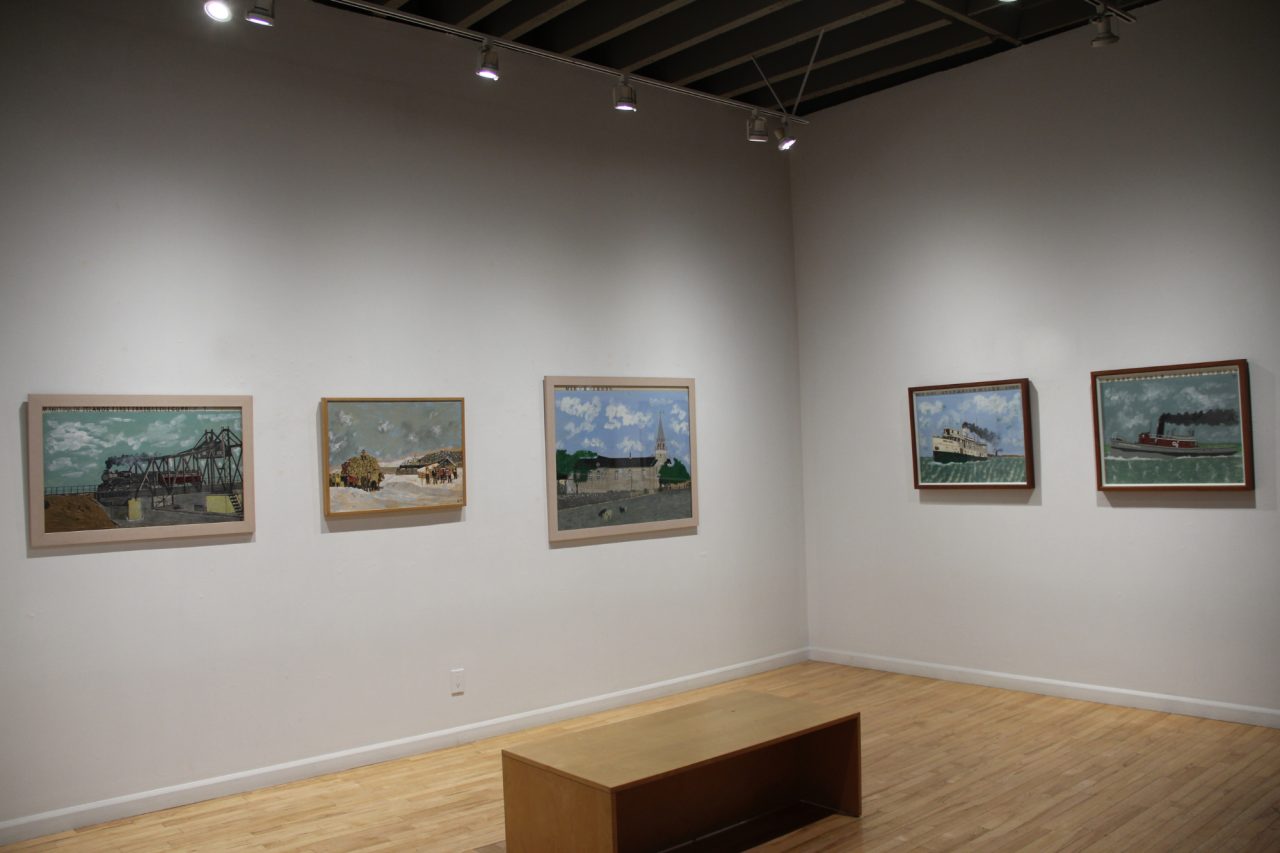 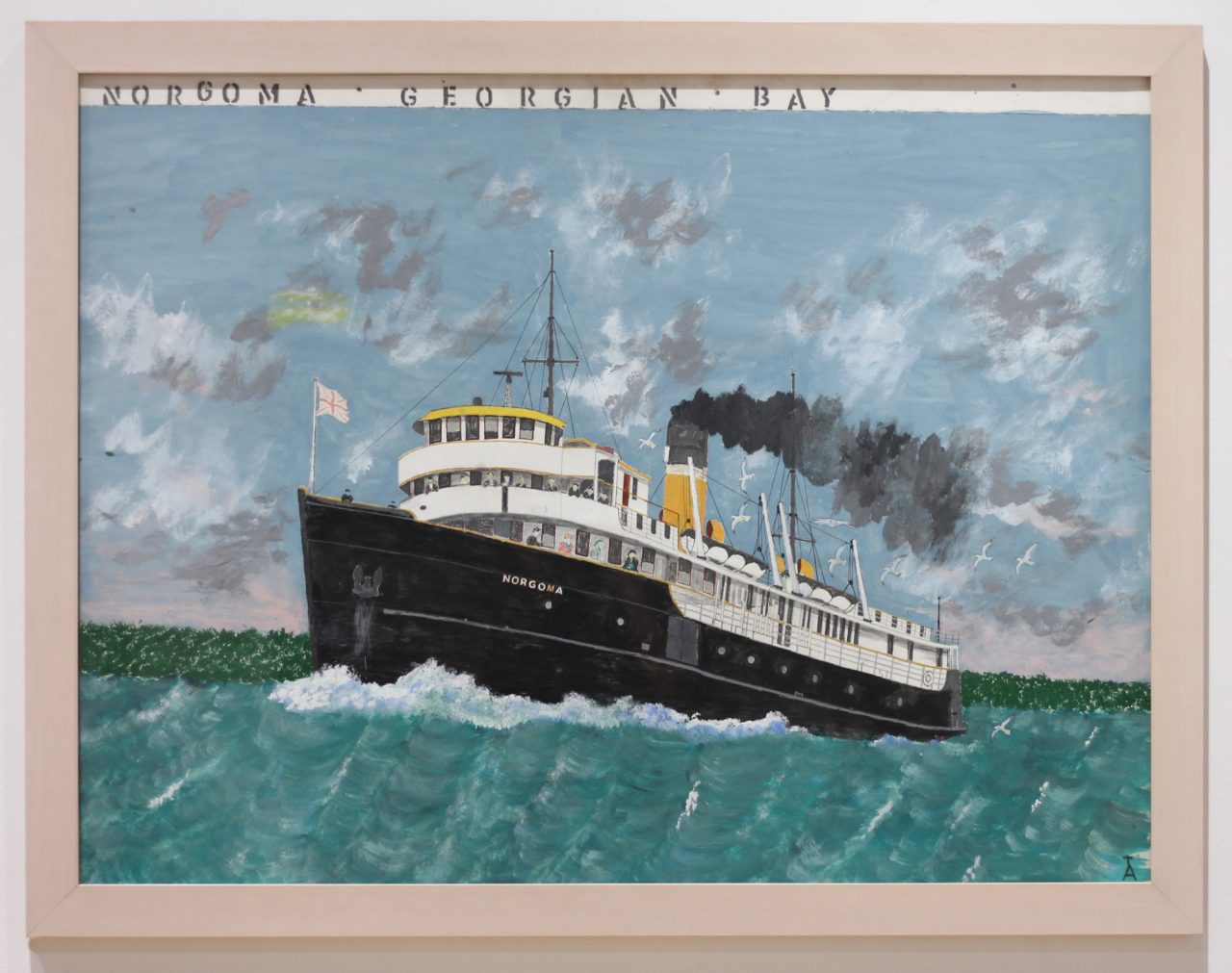 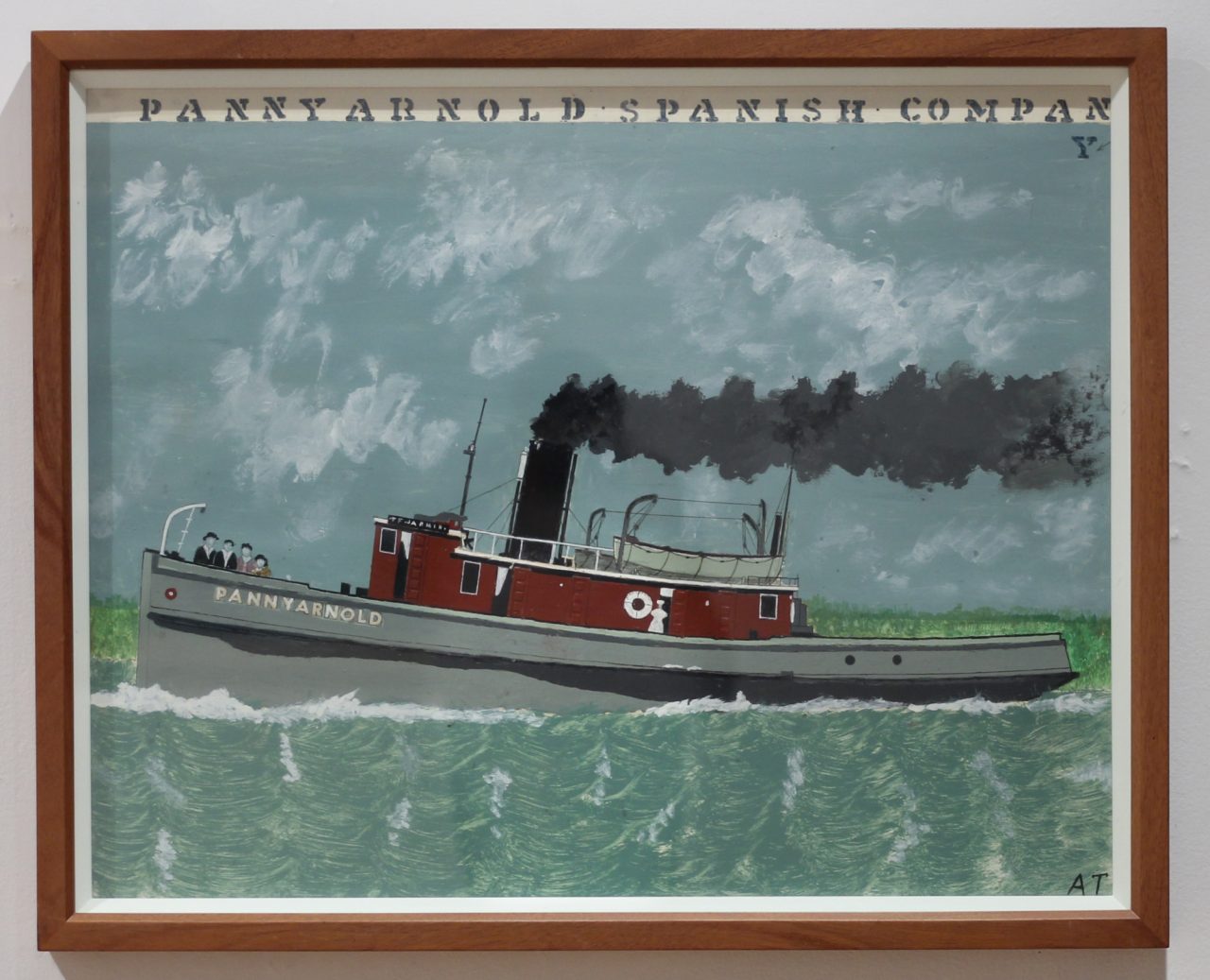 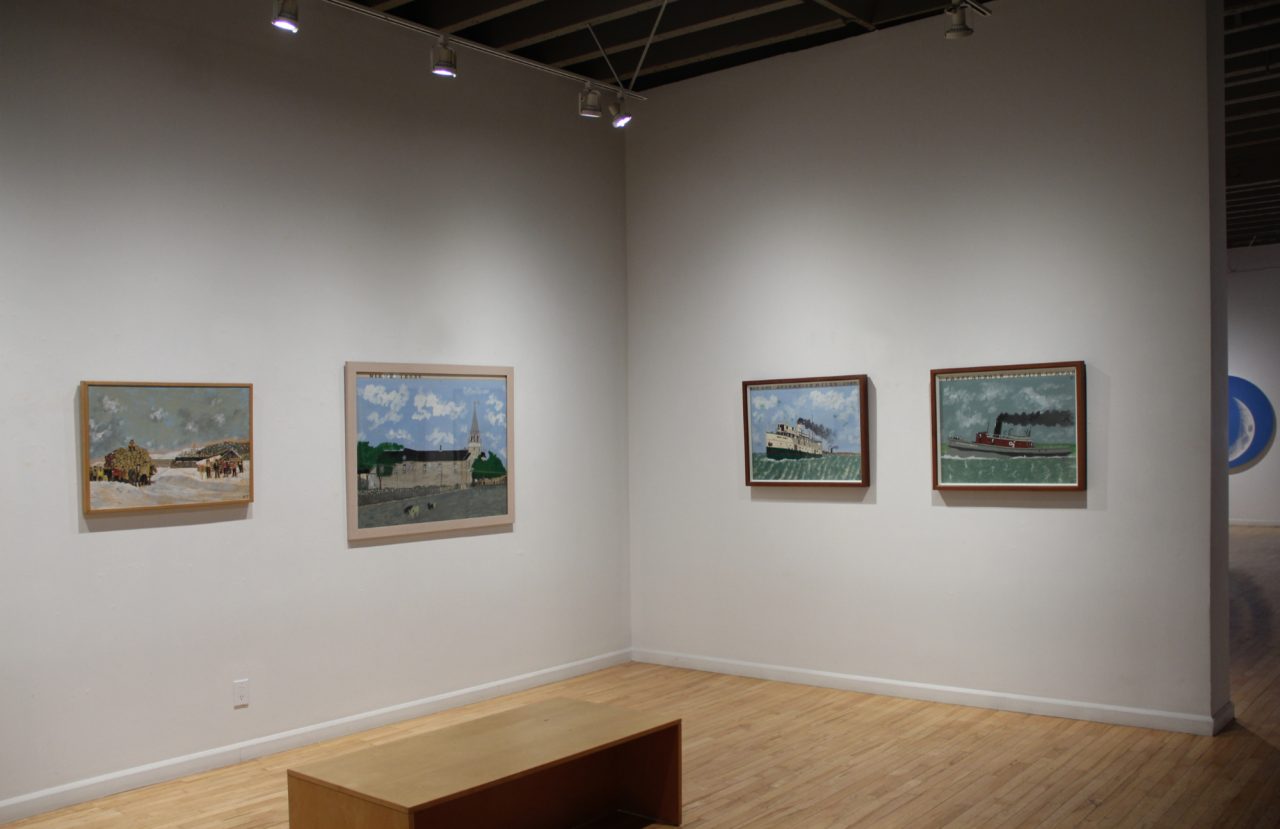 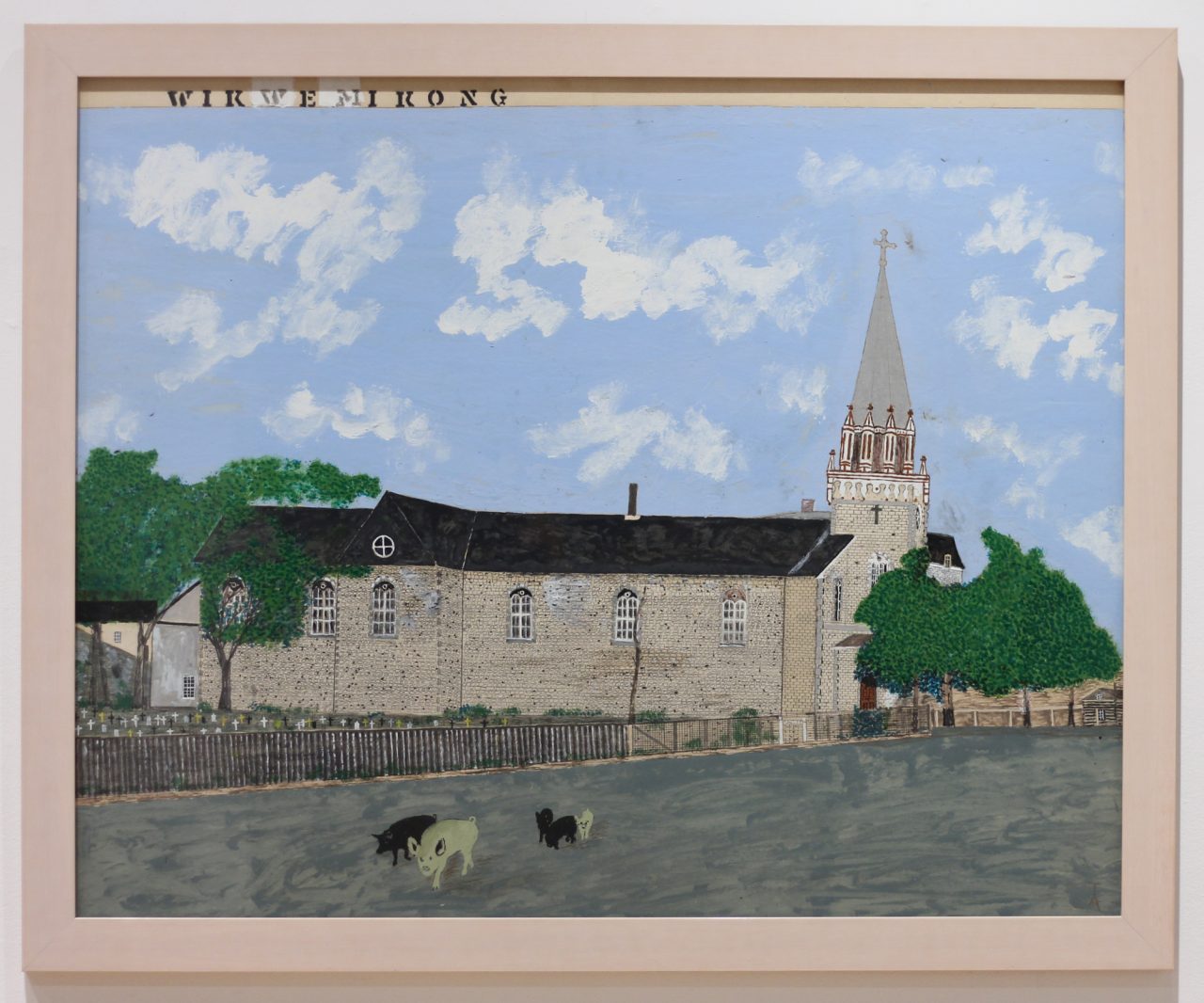 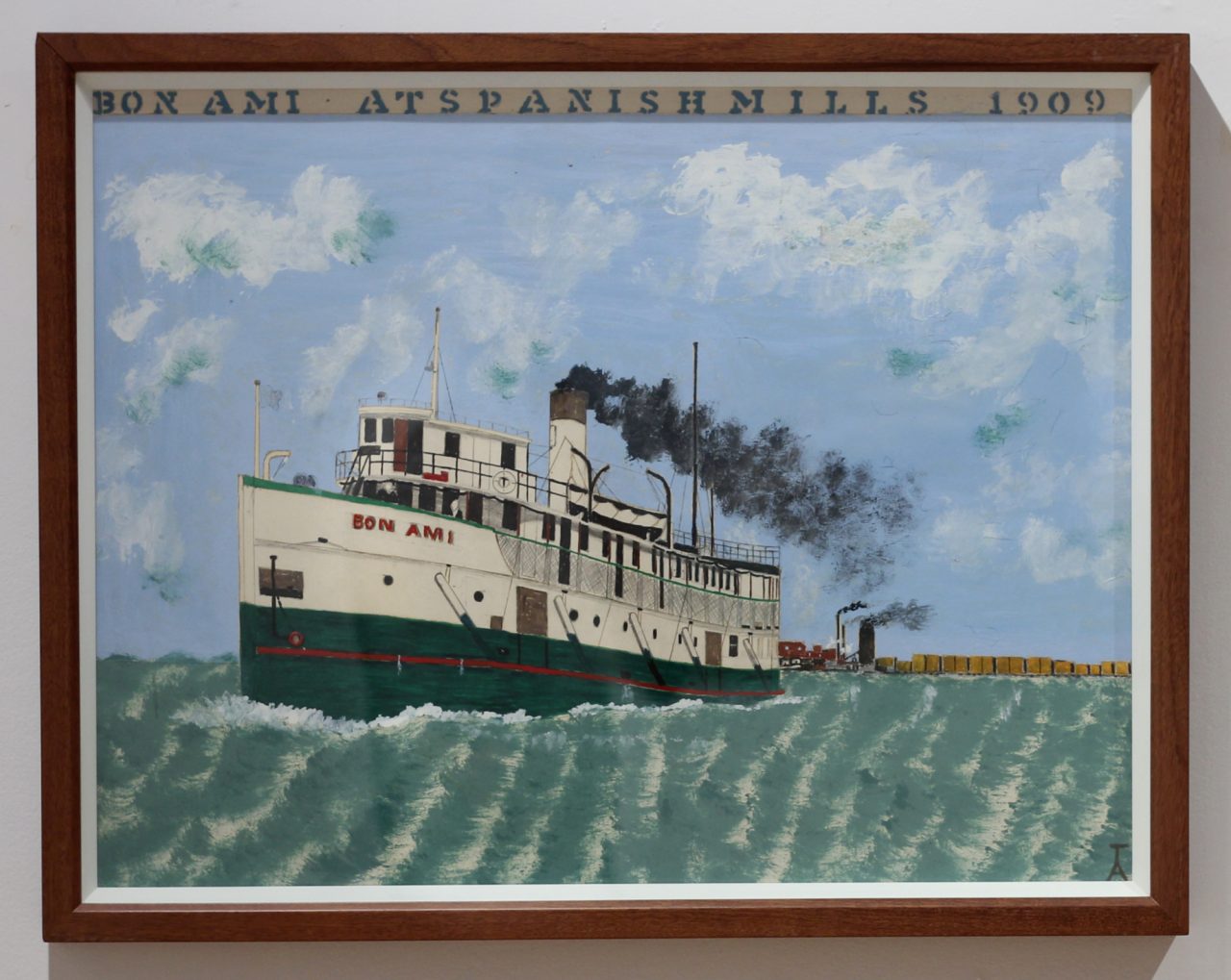 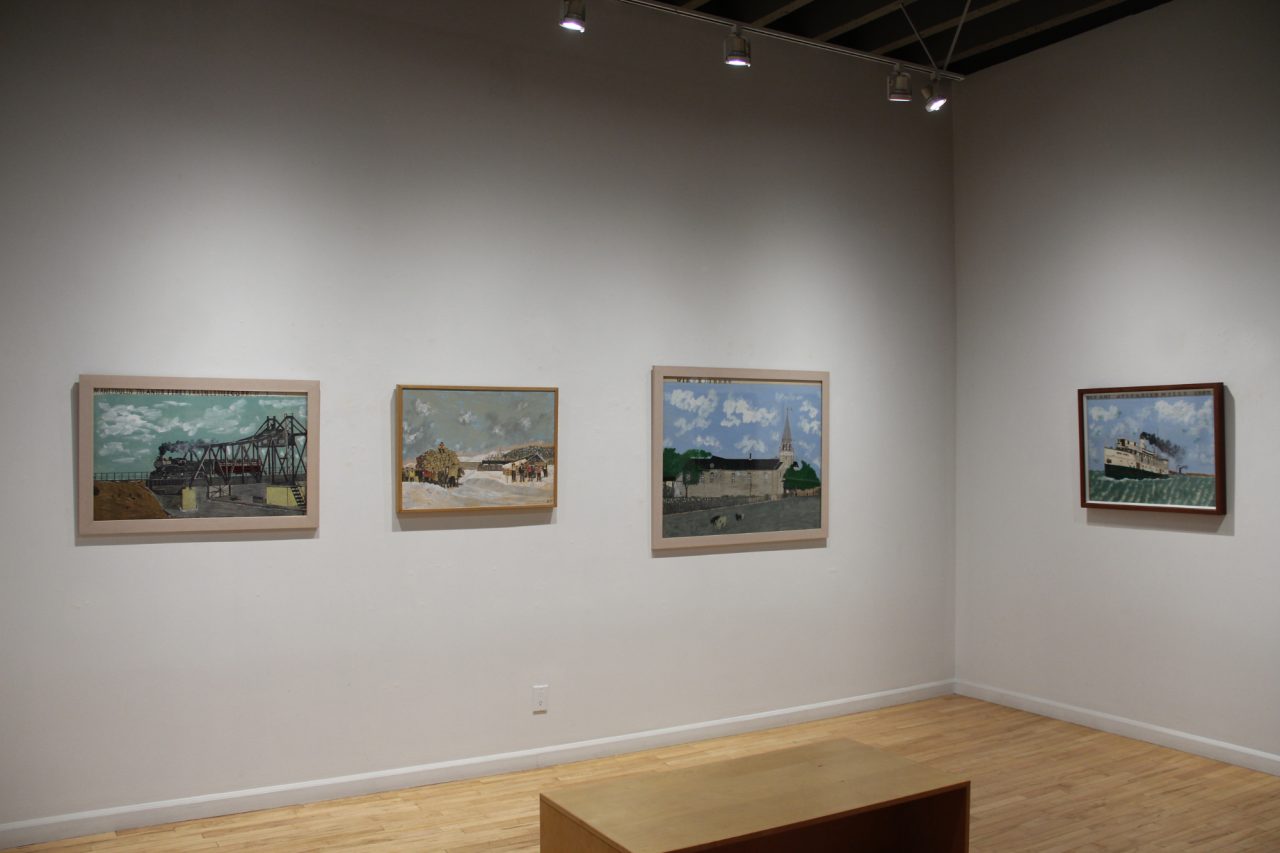 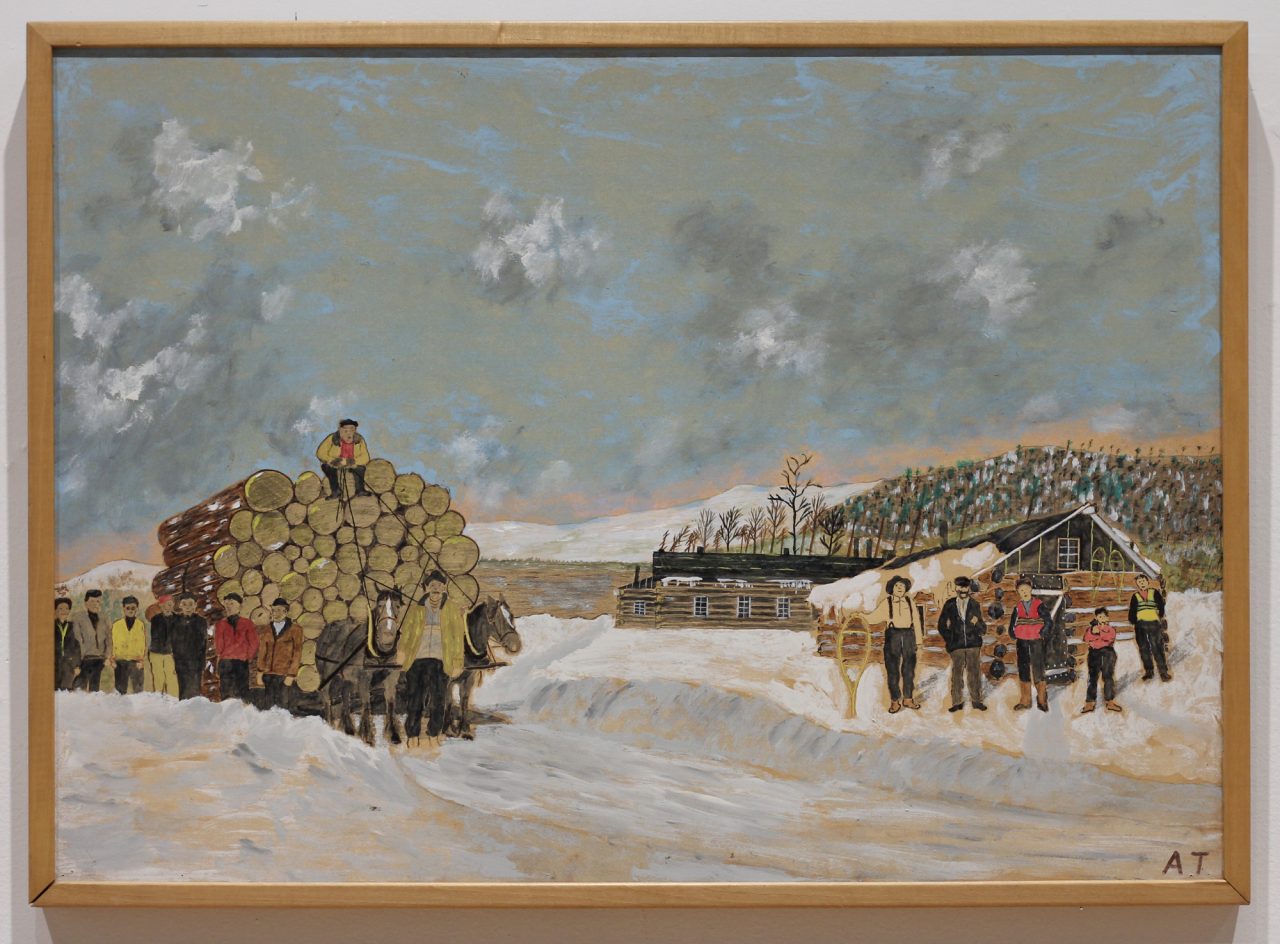 Our July exhibition celebrates the Manitoulin Island paintings of Angus Trudeau.  As fans of Trudeau’s idiosyncratic and joyful paintings for many years, we were recently approached by a family who knew Trudeau and supported his art practice by bringing him art supplies and purchasing his paintings.  The variety of subjects ranged from his beloved lake boats and logging activities to the church at Wikwemikong, making for a perfect exhibit to explore Trudeau’s love of life spent on Manitoulin Island.

Trudeau painted from memory, newspaper clippings, photographs and postcards, documenting his past experiences and the world that he grew up and lived in.  Self-taught, his paintings used a variety of materials (felt pen, oil paint, acrylic) and methods (collage, tracing).  He had a strong decorative sense and would, with amazing accuracy, re-create intricate details of the mechanics of the decommissioned lake boats.  Using flamboyant colours and delightful patterns in waves and clouds, Trudeau made paintings that are alive and extraordinarily personal.   He was an important historian and chronicler of island life.

“Many “naive” artists, once discovered, and once realizing what will sell, proceed to repeat themselves endlessly.  Angus, on the other hand, was constantly evolving and improving.  He developed an ability to paint the various moods of the sky and water that was quite exceptional.  If you came across a painting by Angus in the art gallery you would probably not suspect that he was a native.  His tradition of painting preceded the contemporary Indian traditions depicted by artists such as Morrisseau, Odjig , Ray and others…. He knew nothing about the rules and as a result, regularly and very successfully broke them.” 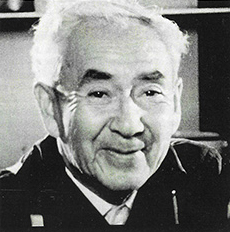 Angus Trudeau (1908-1984) was an Anishinaabe self-taught artist from Manitoulin Island who painted the ferryboats, lake freighters, logging camps and small community villages in and around the island.

From the age of 12 Trudeau worked as a pulpwood cutter at lumber camps and as a cook aboard Lake Huron commercial ships.  He painted during his spare time.   Fascinated by steam ships and lake boats, he painted from memory and from his collection of old postcards and photographs of old ships.  His paintings often incorporated a variety of media, including collage, and are lively and vivid in sensibility.

His paintings and models are in the public gallery collections of the Beaverbrook Art Gallery, McMichael Canadian Art Collection and Art Gallery of Windsor.