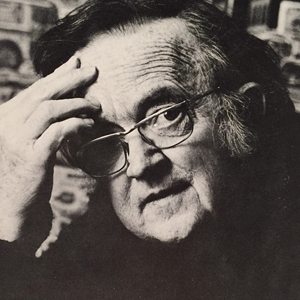 Clark McDougall was born in St. Thomas in 1921. At the age of 16 Clark left high school determined to become an artist. He would ride his bike north of St. Thomas into North Yarmouth and paint watercolours directly from nature. He taught himself proper technique from library books and sought advice from local artist William St. Thomas Smith. In 1950, at the age of 29, Clark traveled to Montreal and Quebec City where he first experienced the paintings of Henri Matisse. He now realized that colour and line could be used in a completely different way. By 1952-3 Clark was working as a “Fauve” painter, where his colours were intensely vivid and non-naturalistic.

A coronary in 1957 forced Clark to paint from photographs in his studio. His painting style changed where the outline became very important to the structure and design of the painting.  Clark’s unique “black enamel” style set him apart from other regional artists.  His first exhibition of these “black enamel” paintings was in 1968 at the 20/20 Gallery, London.  In 1976 the Volunteer Committee at the London Regional Art Gallery commissioned a painting, “Site”, to commemorate the building of the new gallery.  In 1977 the Vancouver Art Gallery organized an exhibition “Clark McDougall: Paintings since 1953”.

Regardless of the style, however, Clark had a highly individual way of interpreting his beloved landscape of North Yarmouth. Clark McDougall passed away of a brain tumor in 1980 at the age of 59. In 1987 the London Regional Art Gallery mounted a large retrospective exhibition of Clark’s work.  Most recently in 2011, the McIntosh Gallery, UWO produced a hard-cover book to accompany their exhibition “Fugitive Light: Clark McDougall’s Destination Places”.  Michael Gibson Gallery represents the Estate of Clark McDougall.  His paintings are in countless corporate collections as well as the Art Gallery of Ontario, Vancouver Art Gallery, Museum London and the Canada Council Art Bank.

As representatives of the Estate of Clark McDougall, MGG specializes in the acquisition and sale of artwork by Clark McDougall.  If you own a Clark McDougall and would like assistance in determining its value, please contact Michael directly HERE or call 519.439.0451. 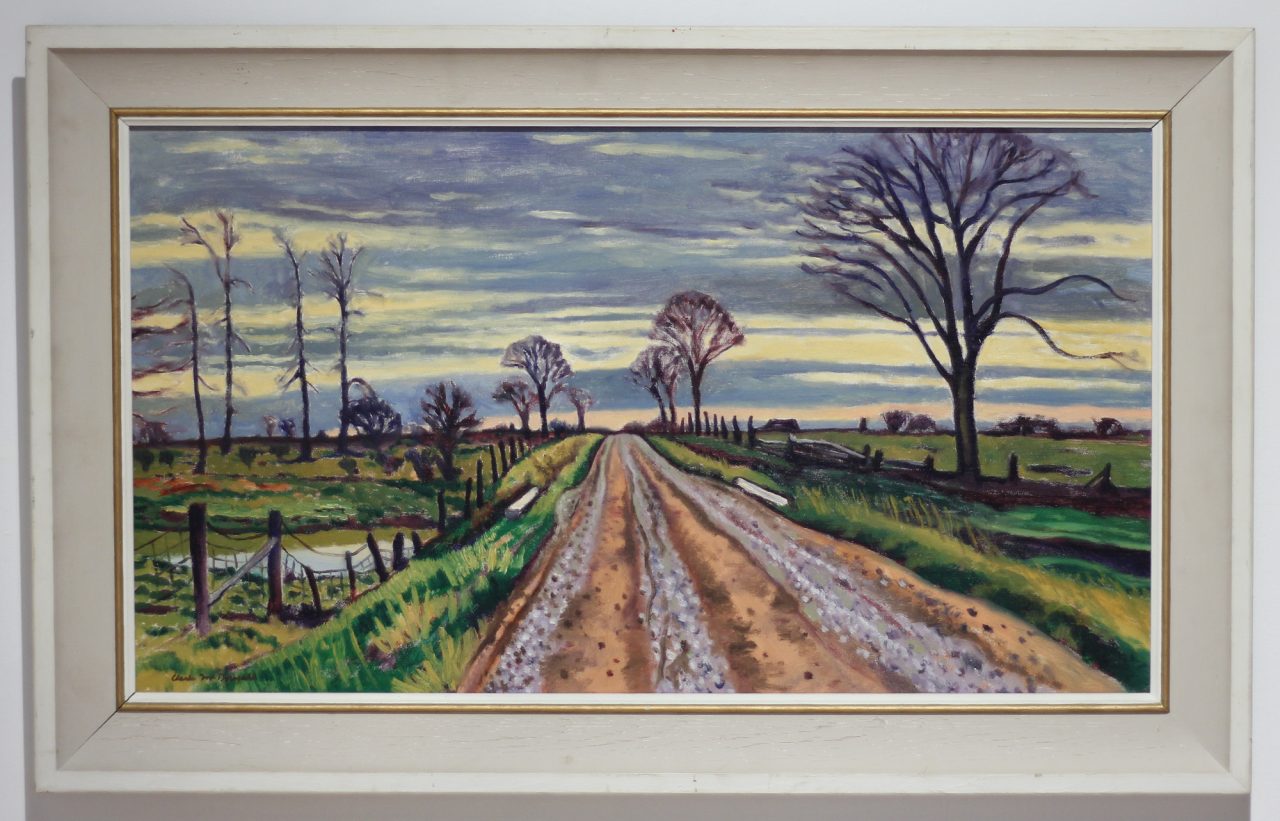 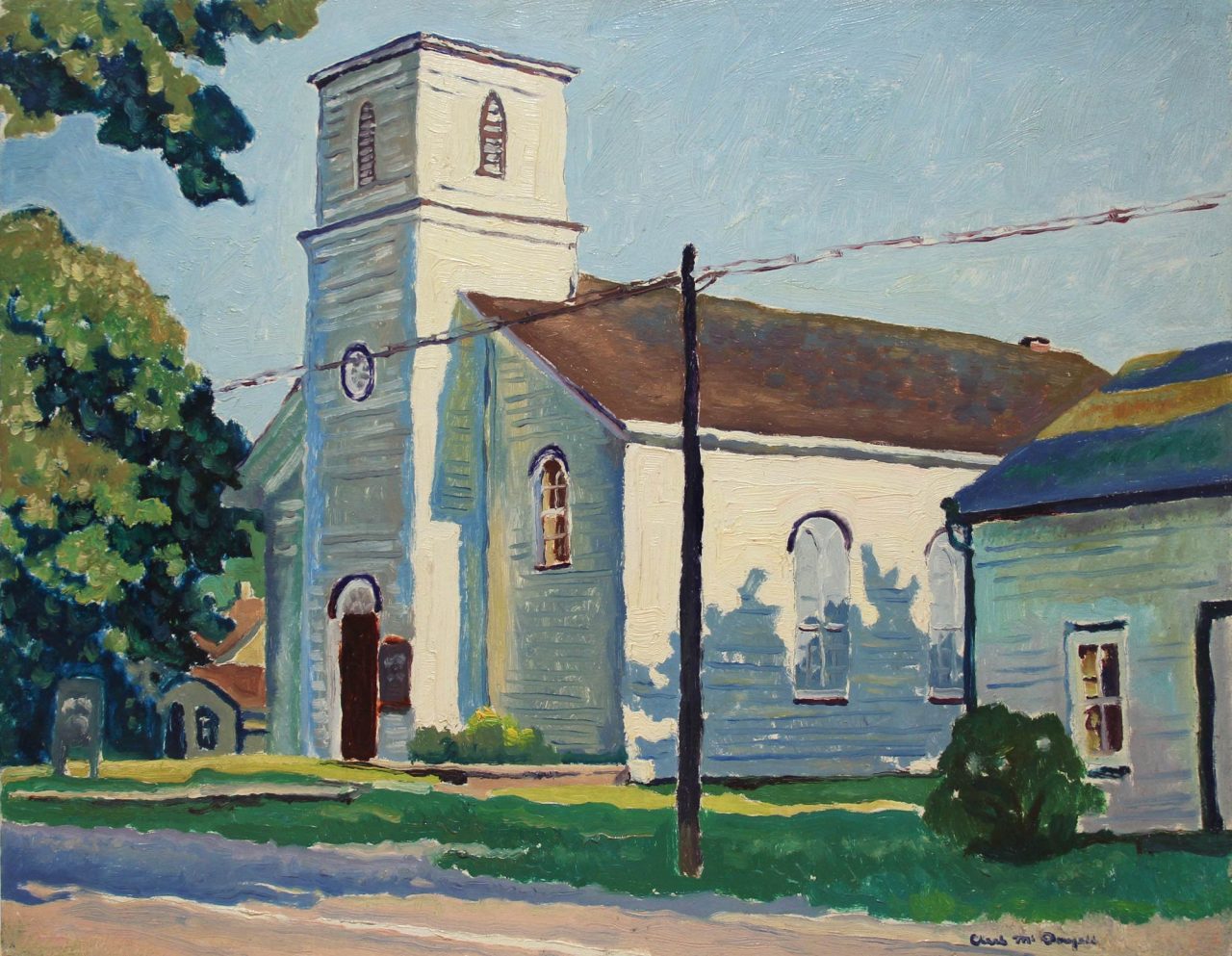 A Church at Port Burwell (D18) 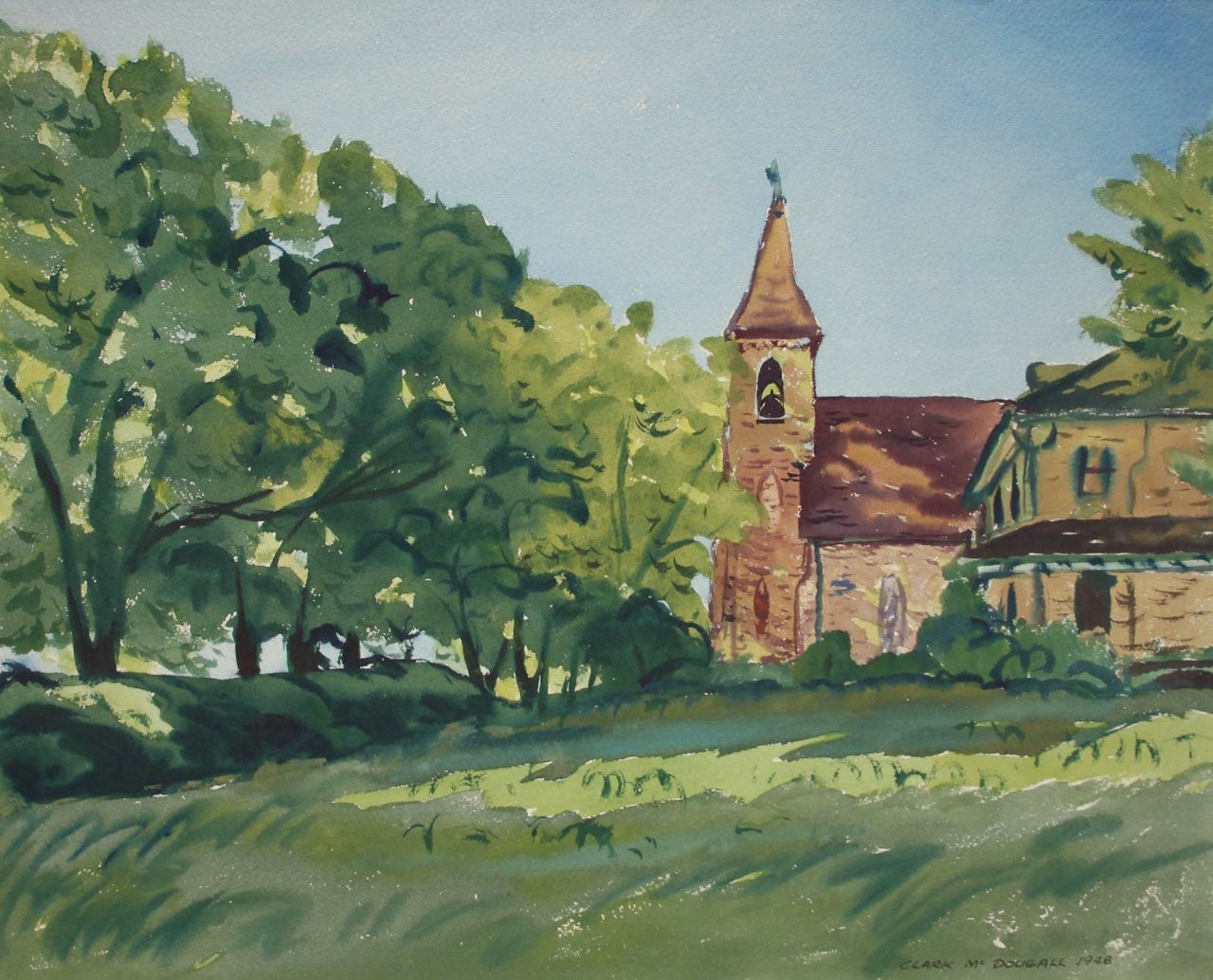 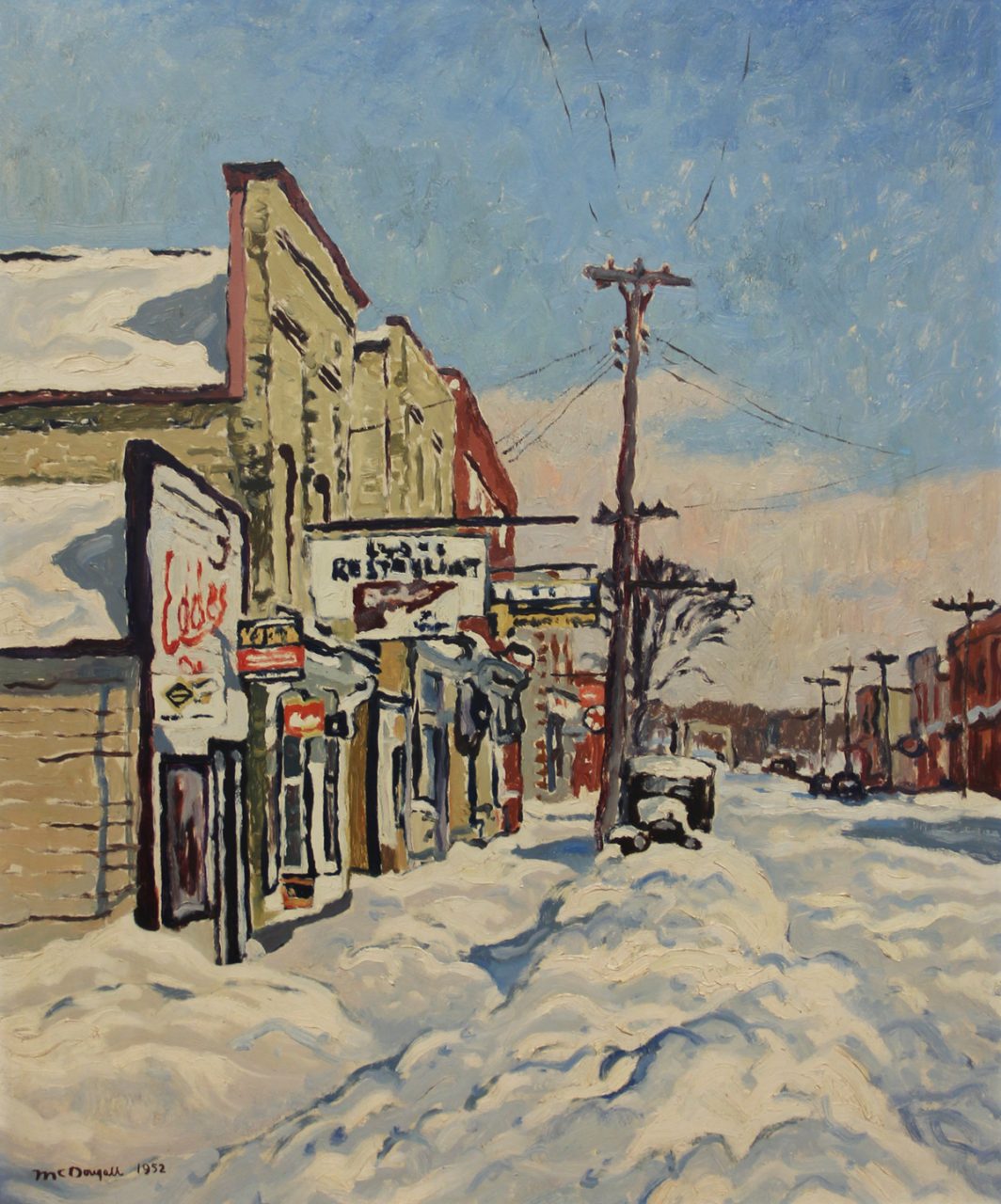 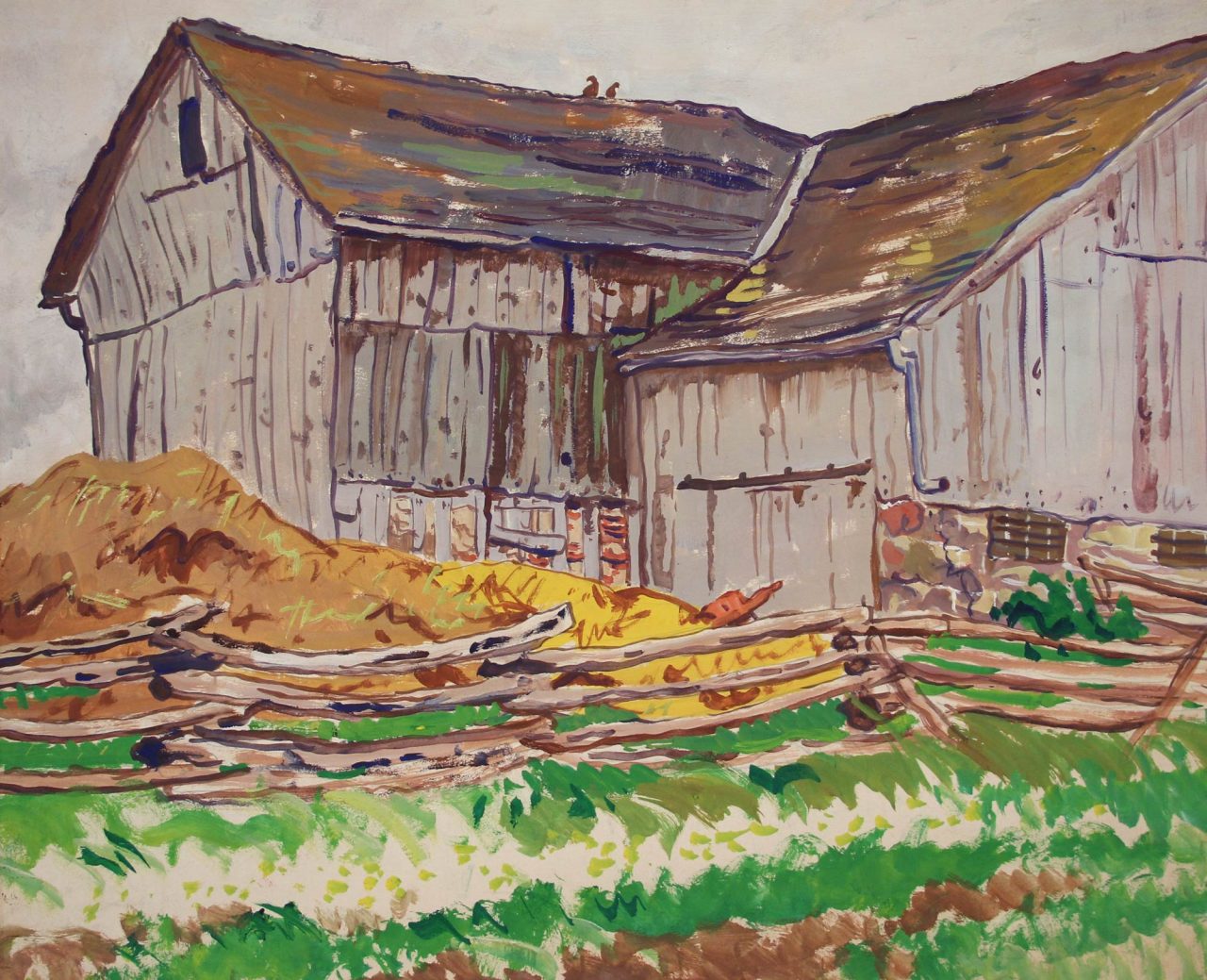 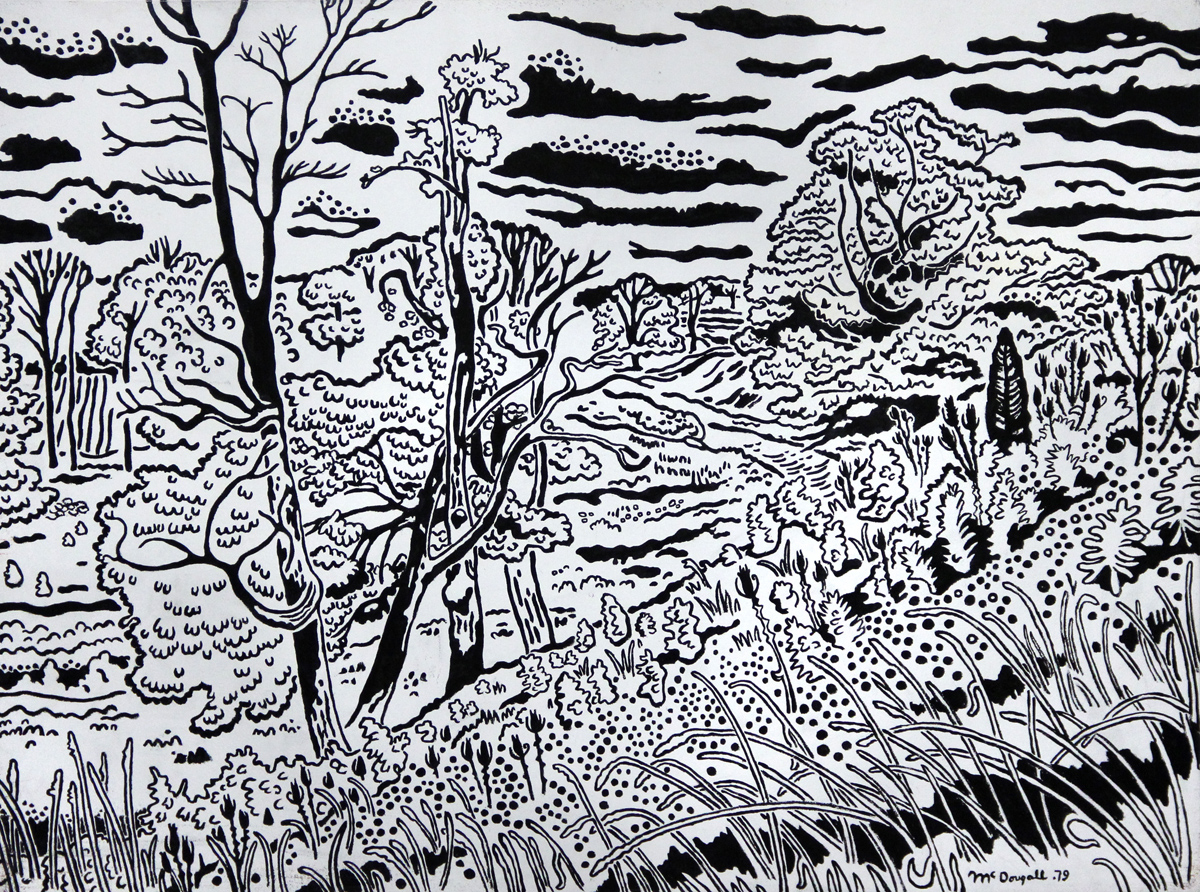 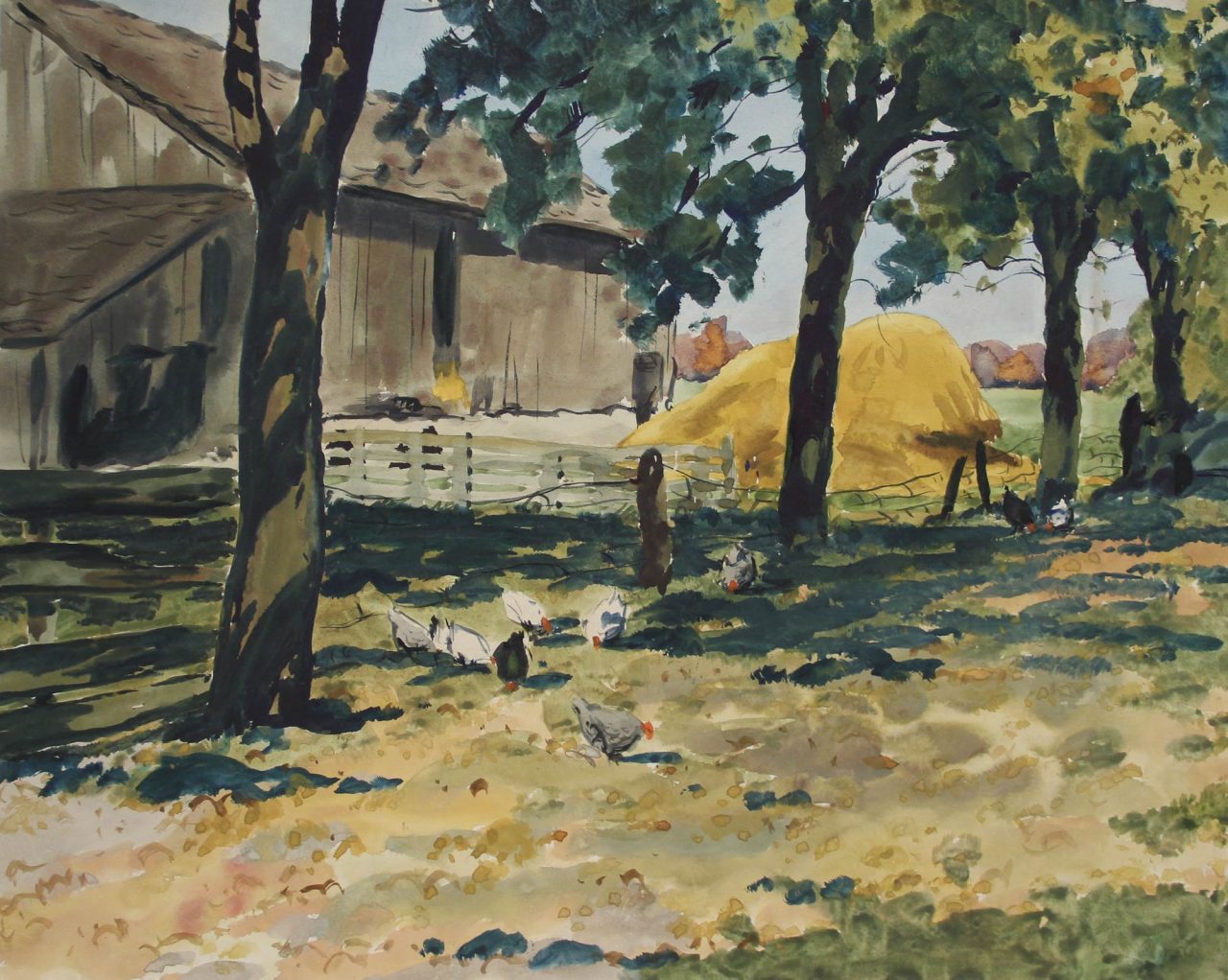 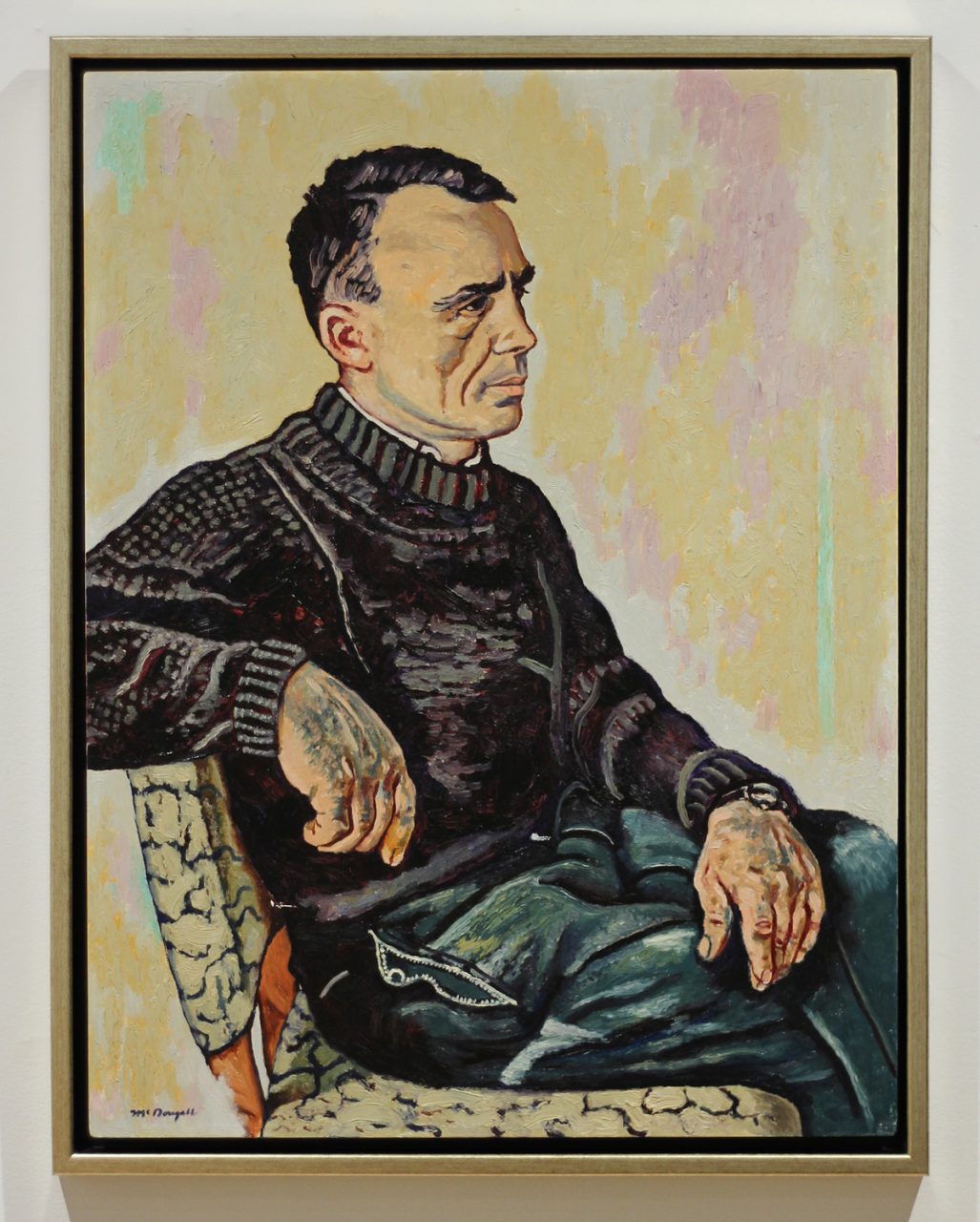 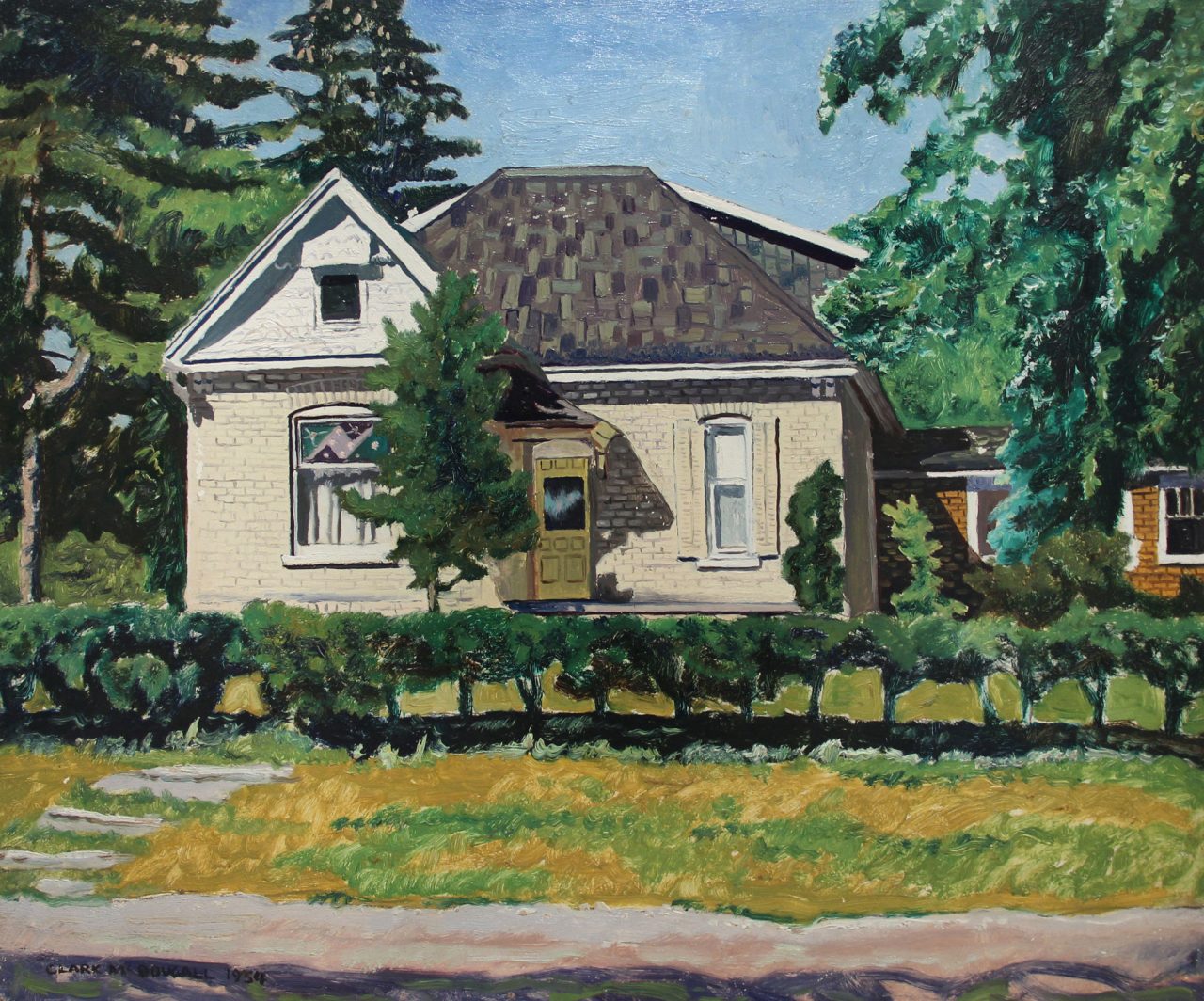 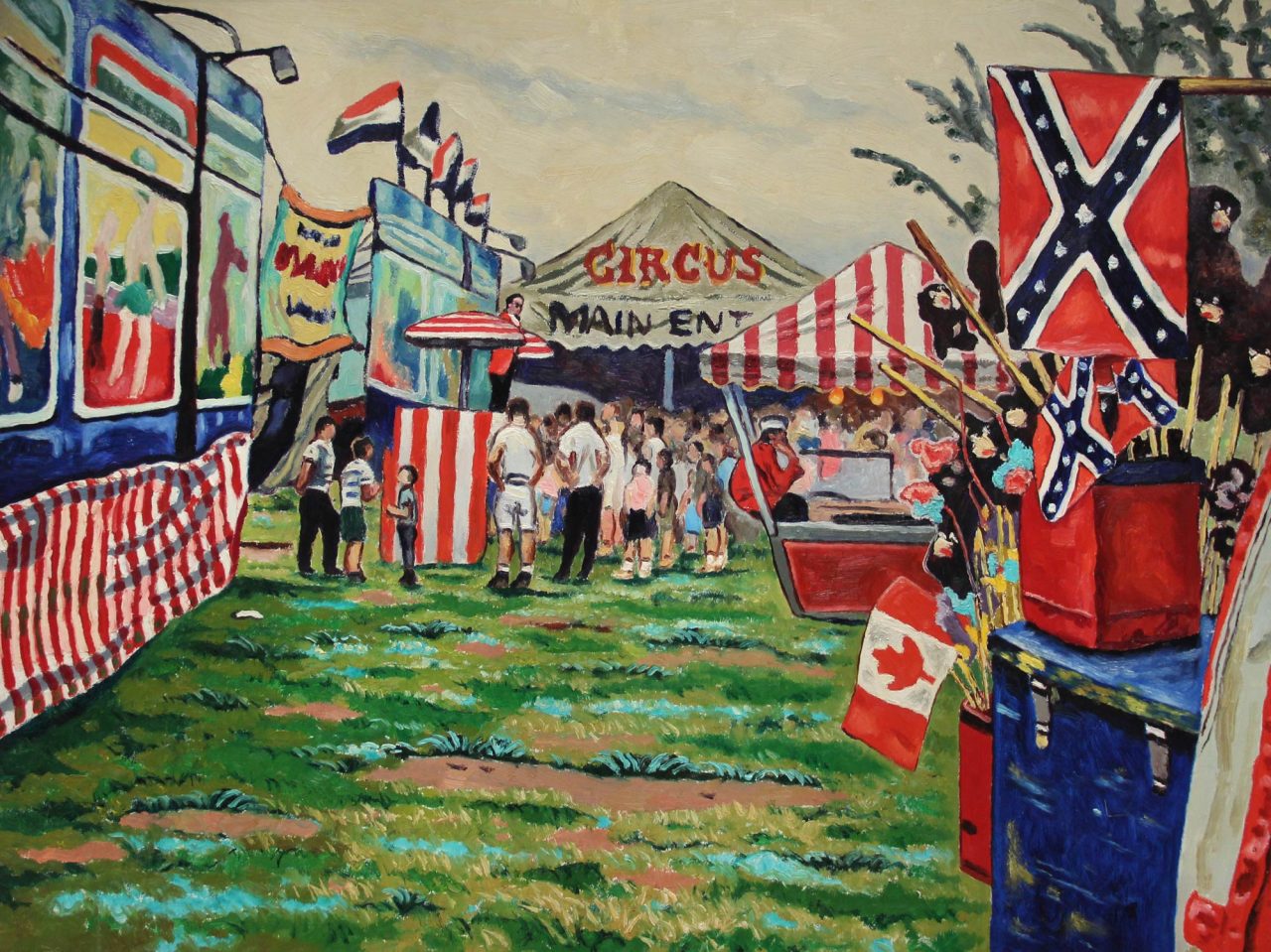 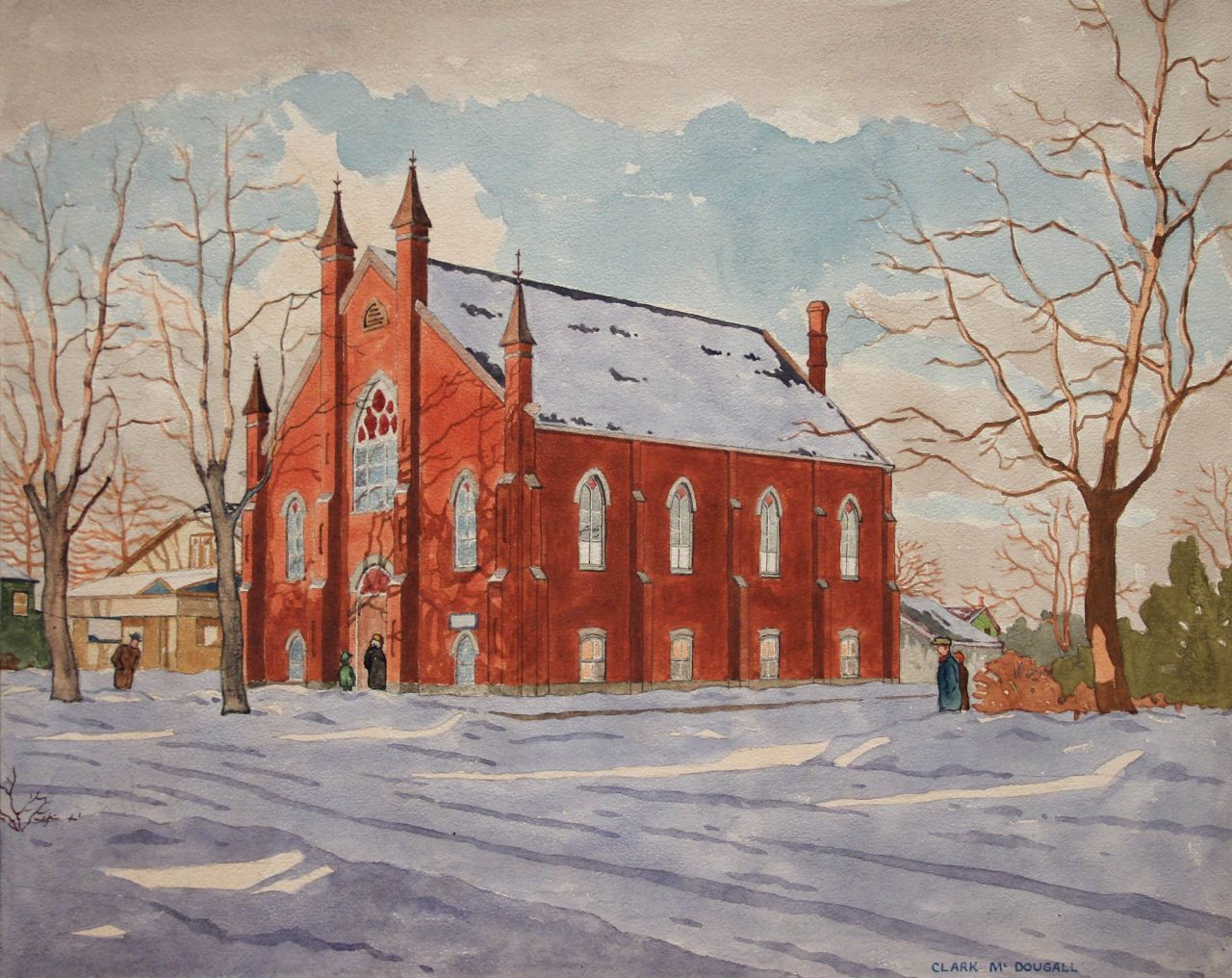 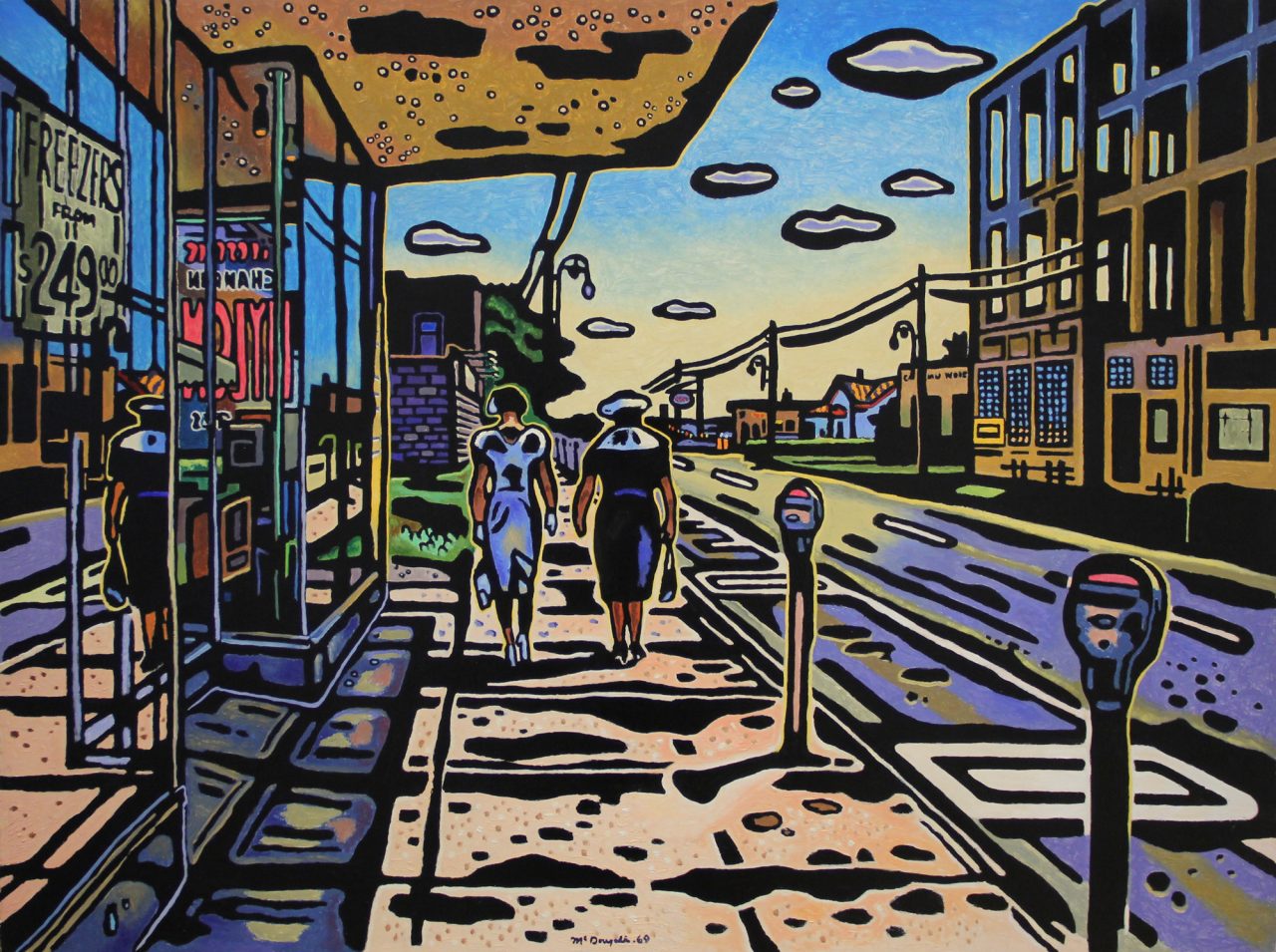 In this exhibition we are sharing Clark’s work from private and public collections and highlighting two subjects that he returned to often: the rural landscapes of North Yarmouth Township and the energetic city streets for[...]

1921 Born November 21 at 56 Inkerman Street, St. Thomas where he lived all his life except for the period from 1939-1945. Went to Balaclava Street Public School and St. Thomas Collegiate Institute.

1932 Met St. Thomas painters William St. Thomas Smith & Ross Osgoode. From then on had them as friends and critics.

1933 Began to paint from nature. First attempts in watercolour. Subjects from North Yarmouth (north of St. Thomas). Taught himself technique from books borrowed from the St. Thomas Public Library: “The History of British Watercolour Painting” by Cundall & “Technique of Landscape Painting in Oils” by Sir Alfred East.

1937 Left School. Supported himself by selling paintings. Read about American painter Charles Burchfield in one of the first Life Magazines. Travelled to Buffalo to meet him and have him criticize his work. Also visited the Albright-Knox School for the same purpose. In both cases he was advised that he would probably benefit very little from formal instruction. His watercolour heroes were John Sell Cotman, Richard Parkes Bonington & Winslow Homer.

1939 Tried to join the Air Force. Transferred to war work because of leaky heart valve.

1940 Worked for Fleet aircraft in Fort Erie, did layout work for sheet metal and then Sutton Horsley Instrument Co. in Toronto. Returned to St. Thomas practically every weekend for 5 years.

(Clark McDougall had a car for a short while after the war but got into an accident; after that he used a bicycle until his coronary, then hitched rides to locations with his brother Don and other friends).
1946 Commissioned by E.L. Cockshutt to paint the Cockshutt Memorial Shield for the Zion United Chruch in Brantford, in memory of those killed in WW II. Exhibited with the Buffalo Society of Artists at the Hotel Statten, Buffalo (April 20-28).

1950 Began painting in oils. Exhibited in 3rd Annual Winter Exhibition, Art Gallery of Hamilton. With his wife and Brock Dais he visited Montreal and Quebec City. Saw paintings by Henri Matisse, James Wilson Morrice & John Lyman which had a decisive impact on his painting, use of colour, and the way he looked at the landscape. Spent a lot of time painting in Erin, Ontario.

1954 Commissioned by the Elgin County Board of Education to do a series of murals for the entrance lobby of the Central Elgin Collegiate Institute, St. Thomas. Painting in what Clark called his “Fauve Period”. Painted again at Glen Allan, also in Port Stanley. Attended a symposium at Albright-Knox Gallery, Buffalo to hear Clement Greenberg speak. Showed Greenberg some of his Port Stanley paintings which Greenberg liked and was encouraging. Painted a painting there of East Broadway which was eventually printed as a serigraph by Editions Canada. Taught evening classes to the West Elgin Art Club at West Elgin District High School.

1955 Commissioned by Monsignor Morrison to paint a set of the 14 Stations of the Cross for Holy Angels Church, St. Thomas.

1957 Suffered a heart attack and was confined indoors for three months. Pains “Fresh Fish at Port” and refers to it as the start of the black enamel style. “Release of the Thistledown” uses black oil outline. Uses casein for the first time.

1959 Exhibition at the London Public Library and Art Museum (reviewed by Lenore Crawford in the LFP).

1962 Black enamel first appears. Begins to alternate between semi-abstract and representational approaches as a regular way of working.

1967 Painted the Provincial Shields at the Federal Coat of Arms for Parkside Collegiate, St. Thomas.

1976 Two black enamel oils are included in “The Artist and the Olympic Idea” at the Art Gallery St. Thomas-Elgin (Aug 24-Sept 4). Commissioned by the Volunteer Committee of the London Regional Art Gallery to do the “Site” painting for the new building which was also created into an Editions Canada print. Included in The Ontario Community Collects exhibition at the AGO.

2010 Exhibition “Clark McDougall: A Life on the Land” organized by the Elgin County Museum, St. Thomas, ON which included paintings from the permanent collections of McIntosh Gallery, Museum London and the St. Thomas-Elgin Public Art Centre.

2012 “Clark’s Urban Life” solo exhibition at the Michael Gibson Gallery. A selection of watercolours and oil paintings of street-scenes from Buffalo, St. Thomas, London and Toronto. 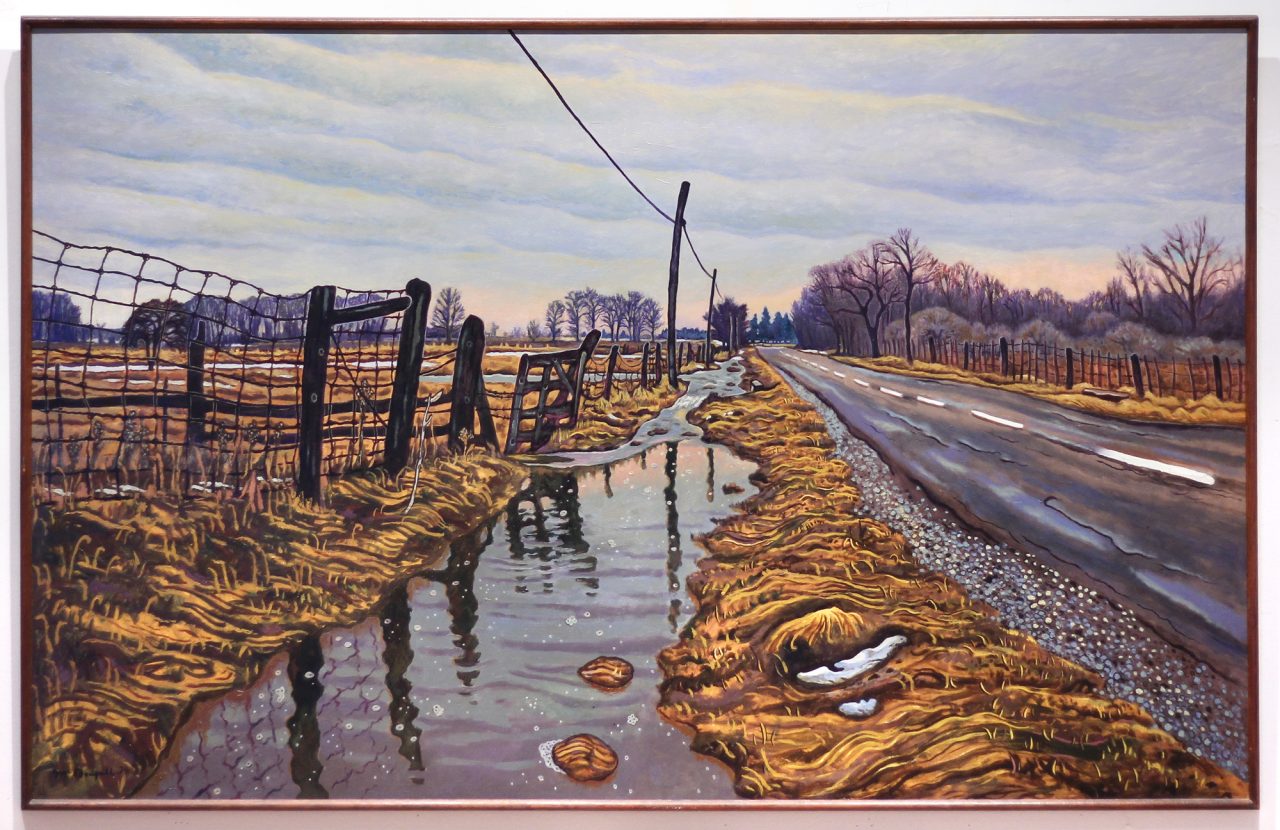 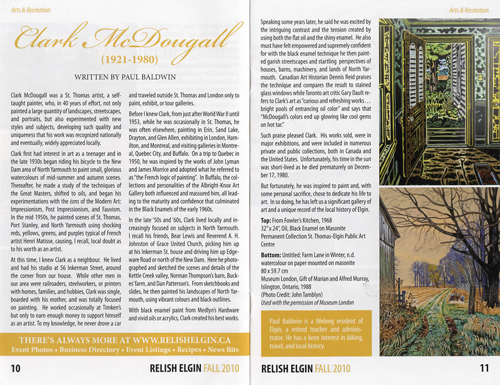 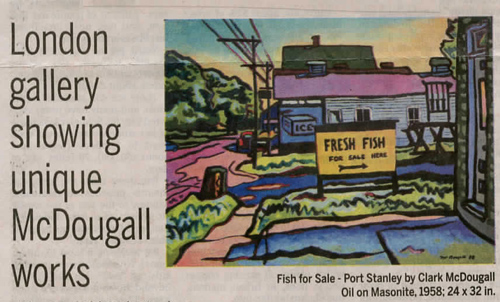 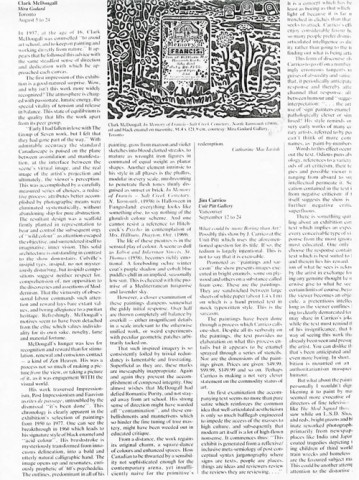 Michael Gibson Gallery video that introduces Billy Bert Young and Clark McDougall's June 2012 Exhibition. Though born over 60 years apart, we see in the video how Young and McDougall's artwork is connected through their use of black line, composition and humour. 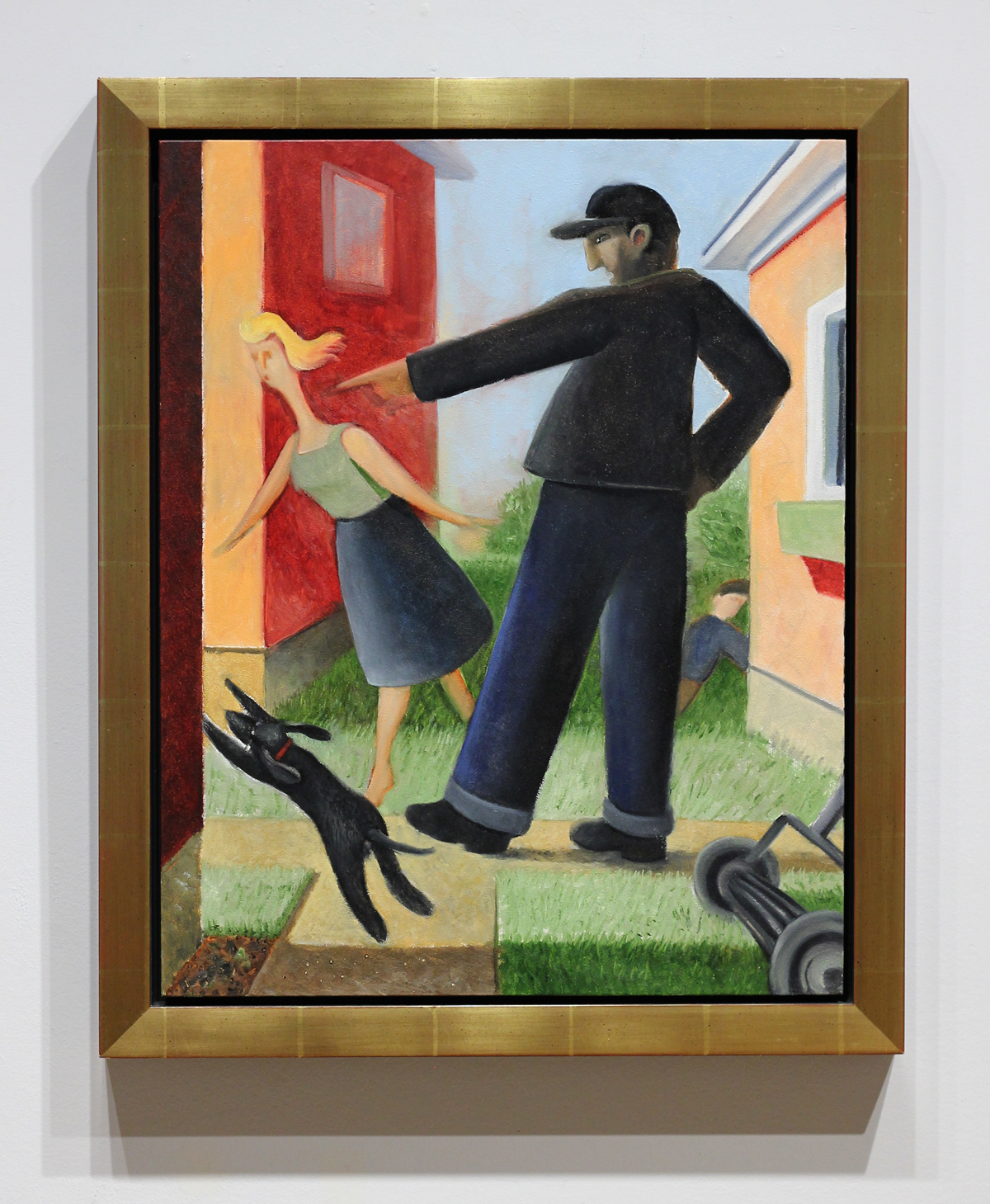 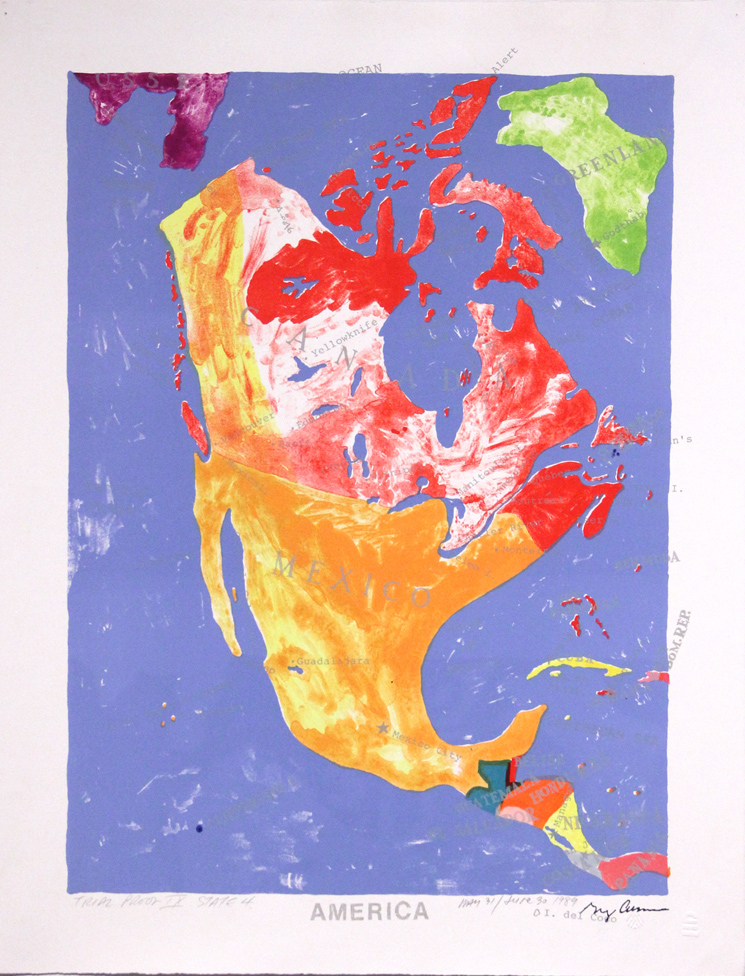 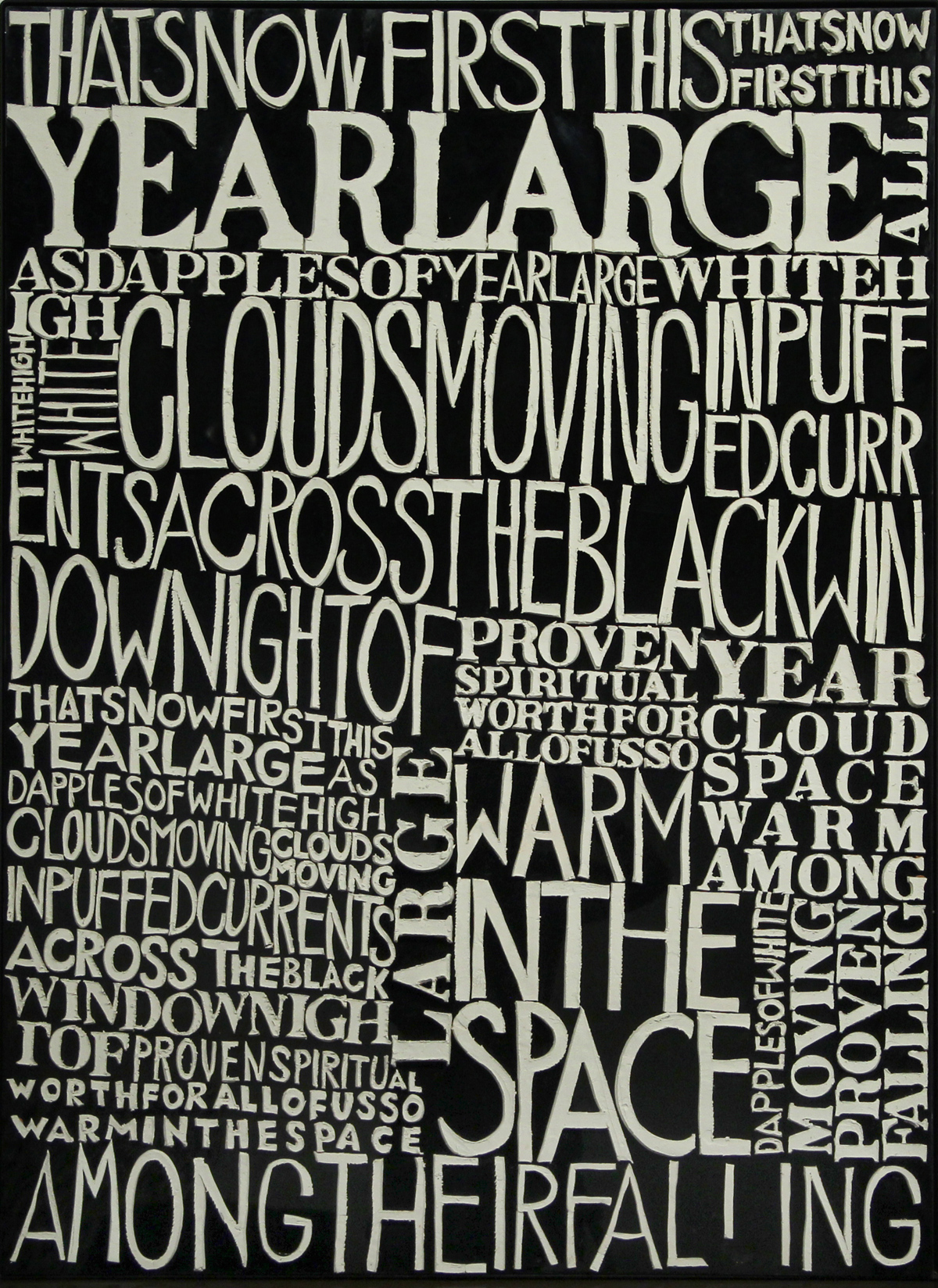